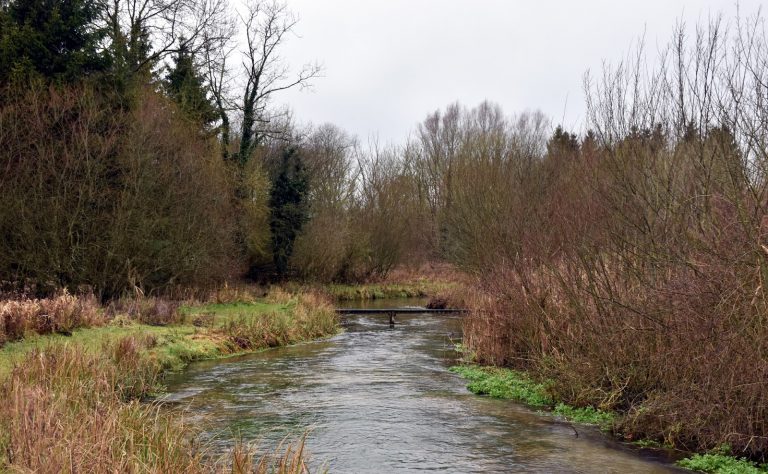 Happy New Year everyone, and best wishes for 2008 .

Apparently it’s 2018, I am no longer forty years old and hell’s horses, where did the last ten years go? If these cranks are to be believed and it is indeed 2018, where are the Hover Shoes we were promised by Blue Peter in the 1970’s and come on everybody, where are the flying cars?

Anyway, we are where we are so on with the guff. 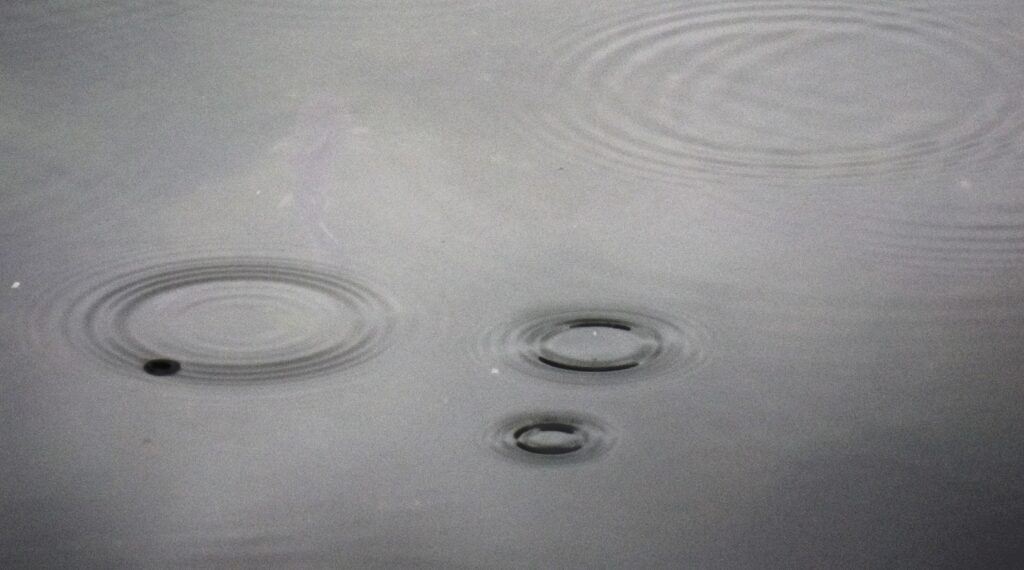 Well it has rained.

Which is welcome and during recent explorations of the northern territories to touch base with relatives there was water lying in some valley floors in the midlands, so expect the usual hyperbole from a disconnected media sometime in the new year regarding flooding, But all those rivers we passed with water in the fields ( Cherwell, Windrush, Avon – flood plains anyone?) are supposed to flood at some point. 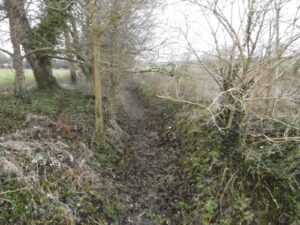 and by way of balance here’s one of a spring ditch that we crossed during our early morning walk on New Year’s Day that used to run most winters but has remained dry since the spring of 2014. 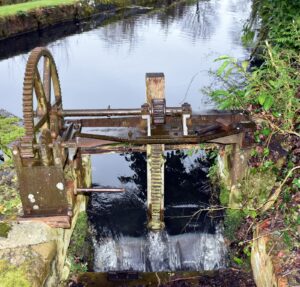 Bridges remain precipitous and the hatch on the house which was installed in the 1840’s and is opened notch by notch to release water from a river on the rise through winter rain remains shut with a small surplus spilling over the top. 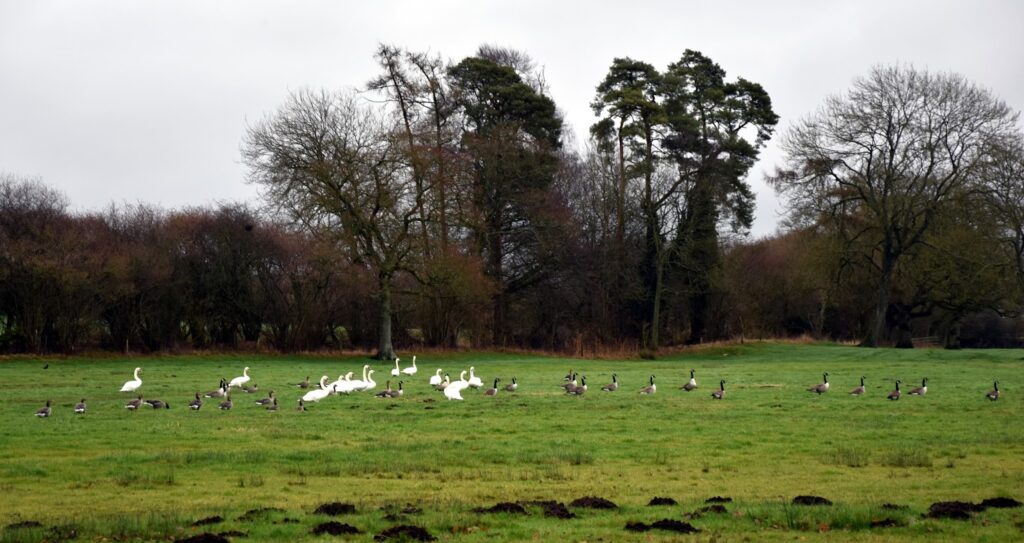 The brief cold snap during the festive period brought more teal into the valley who can be heard whistling their way up the valley as the light fades. Geese have mustered on the meadow upstream along with numbers of swan several of whom seem a little sick, it seems to be a cyclical thing with a spike in the number of winter mortalities every three of four years. Up until recently we have been spared the attention of greedy graculus. It’s not really cormorant water with only a few stretches offering sufficient depth for them to fish. This winter they have been more persistent, targeting both pond and river, I see them most days, five years ago I could count the number of encounters with Noggin the Nog’s Budgerigar on one hand (I have the full compliment of digits and nor am I a witch) Thirty years ago it was rare to a see a cormorant this far inland. 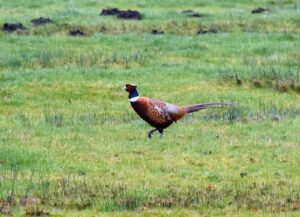 Woodcock retain a presence in the wood as do several pheasant despite the best efforts of Elma J Fudd and his blunderbuss on the neighbouring estate who spent part of Boxing Day blazing away at our pheasants exiting from the side of his block of maize. He hit some this time and sent word of several birds that needed picking up on the riverbank with ten minutes of daylight remaining,

Before Christmas I filed annual river reports to the relevant authorities. For part of the report for this stretch of the Dever I offloaded about the Candover Stream supplementary flow abstraction and the revelation that it had impacted upon the aquifers of the Dever and may even have used the word “weasels” when describing a Water Company’s objections to the EA’s attempts to reduce the quantity permitted to be abstracted to limit any impact on the Dever aquifers.

A reply arrived shortly afterwards from the compiler of the excellent annual report suggesting that the scheme had not been used that much in recent years. With scars still raw over another recent revelation regarding “Dodgy Data” and the rise of “Fake News” I touched base with a couple of keepers who jump into the river immediately below the Candover stream to ask their opinion on this claim. Turns out the river can change level at a remarkable rate during a summer with wellies required one week to cut the weed, waders the next.

The question also remains that if the pumps in question have not been used very much in the past forty years how did it come to light that their “cone of influence” extended to the aquifers that feed the neighbouring Dever valley?

What times we live in.

In other news, Child A and Plus One are close to completing the process of purchasing a house across the county line in Berkshire, and I don’t mean to keep coming back to the passage of time but didn’t they do their O levels the other week? I think 2018 could be an exciting year for them both.

Child B attended most days at the Melbourne Test and has two more lined up in Sydney where he currently resides having taken in the Fireworks on New Year’s Eve. He has met Kangaroo, Koala and Mike Atherton over Christmas Lunch,

Apologies the Kangaroo and Koala were not at Christmas lunch, 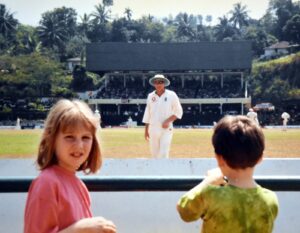 Face to face with Kangaroos and Koala were a new one for Child B but he’s previous with Athers.

The first encounter was in Sri Lanka in 2001 at a thrilling test match in Kandy. Call us out as Carpet baggers but we received a four figre sum following the demutalisation of Scottish Widows, a merry band that Madam had signed up for following advice two years before to opt of Serps. We didn’t own a house and had a fair old car loan, but common sense prevailed and we blew the lot on a three week trip to Sri Lanka to take in the Test match, tickle turtles, temples with teeth, elephants, monitor lizards and much much more.

A real adventure. I’ve banged out several thousand chunks of guff on here regarding short trips away, a reprise of this trip could make the internet creak a little so I’ll stick to the cricket. It wasn’t an organised tour, we went on our own and rocked up at the ground in a tuk tuk with our seven and eight year olds to pay less than two pounds for our tickets to sit on plastic garden chairs with the locals and a small division of the Barmy Army. Child A completed many puzzles and several books as cricket wasn’t really her bag and Child B introduced himself to Mike Atherton. Each day we popped into the score box, said hello to England scorer Malcolm Ashton before climbing the ladders to change a few numbers with the dozen or so kids who seemed to operate the scorebox. Up on the hill behind the stand we could make out many orange robed Bhuddist Monks who had abandoned their chores to take in what was a very exciting cricket match and an unexpected win for England.

They don’t play Test cricket at the ground now, which is a shame as we would like to have returned one day. By pure coincidence, Our local club Longparish held a fund raising auction a few years ago and one of the lots was a signed print by Sporting artist Jo Bowen of the same Test match at Kandy, it now hangs on our wall and four of those little blobs in the background are the four of us.

The next time we met Mike was a few years later at the Lords Test between England and The West Indies. Channel Four had the live coverage contract and as part of the build up to the day the presenters, Mike Atherton, Simon Hughes, Ian Bishop and Mark Nicholas would sit casually on a picnic table on the Nursery Ground musing on the impending action. Child B and myself, a jovial West Indian and a chap in a very stripy blazer were invited to sit on the picnic table behind discussing cricket to complete the scene.

Anyway, piece done. Mark Nicholas flounced off as some hair had been deemed to be out of place, Simon Hughes went in on himself but Mike Atherton and Ian Bishop came over for a few minutes chat. The chap in the stripy blazer had a lot to say, so we didn’t get to jog Mike’s memory about our encounter in Kandy but Child B did finally get his autograph (Child A didn’t trust him with her pens at the Kandy test).

I think that’s it, and I’ll own that I was going to end this guff for good this month as it’s ten years since it first started. It was only intended to run for one year and ten years seems like a number to say “fin” but I guess it’s become a bit of a habit.

So in the words of my first employer Arthur Dodd, (Google him kids, he was very much the Jed Clampett of his day)

Start typing to see results or hit ESC to close
salmon fly fishing chub roach pike
See all results
More Stories
A Clear Winner in Sussex – Chalk Springs Trout Fishery
This website uses cookies to improve your experience. We'll assume you're ok with this, but you can opt-out if you wish.Accept Reject Read More
Cookies Policy