The 1st April saw the start of the fly fishing from boats season on South East Water’s lovely Arlington Reservoir near Polegate in East Sussex. Bank fly fishing started way back in the winter months and remains a very popular and successful route to catching plenty of fish around this very picturesque water. Nestled in the Sussex Weald amongst fields and trees, it has great views to the ‘Long Man of Wilmington‘ carved into the South Downs. He is looking a bit malnourished at the moment though and fading away so needs his outline re-defining a bit. Anyway, it’s nice to feel someone is watching over you, and so it was last Wednesday, an almost perfect fly fishing day but for a little extra cloud cover maybe to help get the fish up to the surface.

Large orangey-tan coloured buzzers were emerging all day, not in great numbers but enough of a constant trickle it seemed to get the trout looking around as well as the ducks. They lined up in the areas where the emergers were most congregated, constantly ducking their heads to feed which served as a useful target area and indeed resulted in fish to the boat.

I was sharing a boat with Andy Lush, proprietor of The Friendly Fisherman tackle store in Tunbridge Wells, and a very experienced fly and lure angler for trout and predators alike. Andy fishes with a purpose and it was fascinating to get an insight into his constant searching and trialling to work out where the fish were, what depth they were feeding at and what flies were going to work best for him. He fished a team of 3 flies, buzzers and similar imitative patterns fished down in the water column and largely static or barely moving, while I remained on a single fly further up in the water and moved a little quicker.

In the end fish came to both methods through the day but Andy definitely had the edge overall, probably thanks to the combination of a more naturalistic approach that suited the feeding conditions of the fish. He got his 6 fish limit by the mid-afternoon while I ended on 3 fish with a couple of ‘long releases’ but as always with Arlington fish, all great fighters for their size with many fish leaping repeatedly which is always fun. It was pretty much a similar story elsewhere on the day with bags of fish for mostly everyone we spoke to, including a cracking fish of 9lb 4oz for a Mr John Plowman that we saw at the end of the day. There are bigger fish like this to be had, up to double figures indeed, as the specimen fish sheet showed so you never know what might grab hold at Arlington.

Thanks to its peaceful and picturesque location, Arlington reservoir is a great place for families to enjoy a day out. There is a dedicated picnic area and separate car parks for visitors and anglers, a trail leads around the reservoir with great views and birdwatching, and during the season tuition days are often held or can be arranged for those wanting to learn to fly fish. Contact the Fishing Lodge for more information by calling 01634 276310. 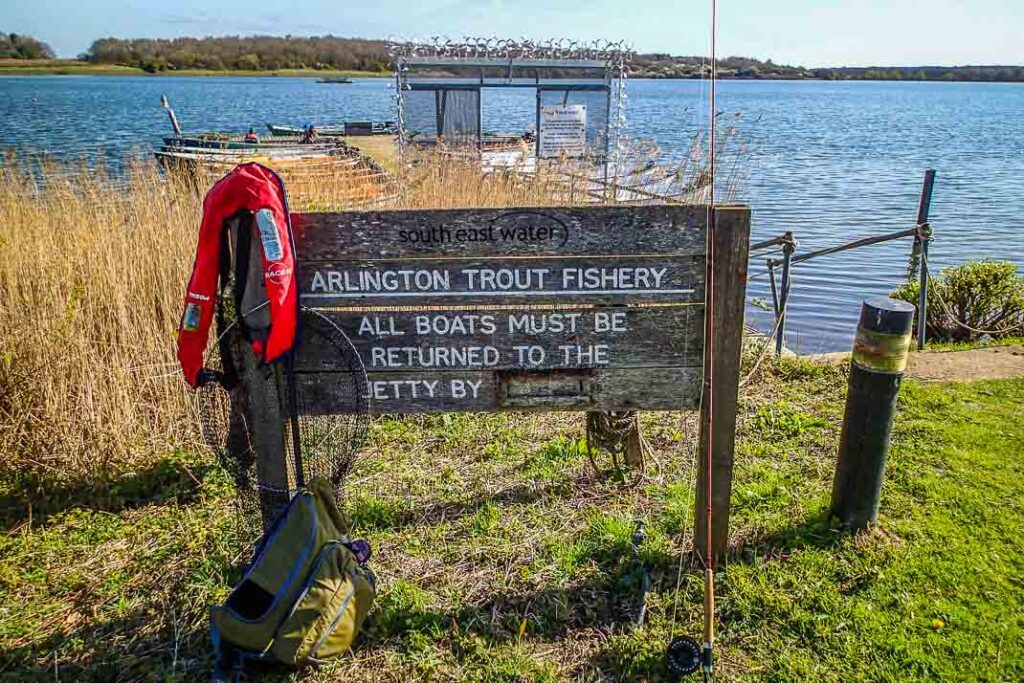