Beach Combing with Ming the Merciless

For those that have kindly been in touch… 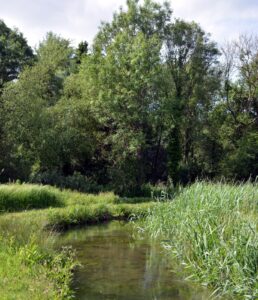 No we haven’t been away on holiday this week , although Madam is once again on the annual year 6 school residential trip to the activity centre at Calshot Spit, driving kayaks, building towers from crates and climbing up telegraph poles to stand on the top.

I have been at home, nose to the grindstone. 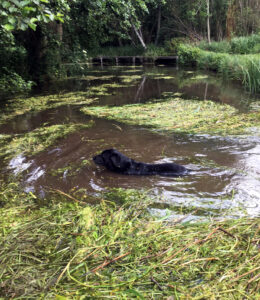 Two days to go before the end of the June Weed Cut and on this stretch of the river a bit of a non event bar a bit of fringing and tickling up ten yards of water celery. It may be a different story come the July cut. Mayfly continue to hatch, in comparative safety as it happens (are we still allowed to use this phrase Post Yewtree?) as few fish are interested in them anymore and many lie dogo on the bottom of the river after the excesses of recent weeks.

Note to self: If Buddha is right, and upon my demise I return to this earth as a Mayfly, don’t go early on the hatching front.

What’s the point of getting older if you don’t get any wiser? 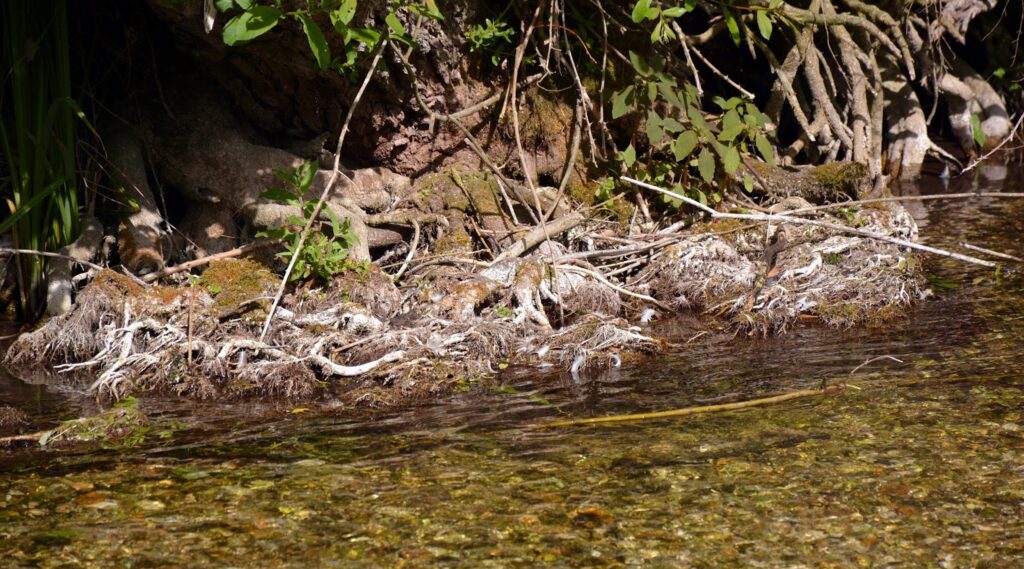 Fishing has steadied up a bit, as one would expect, but numbers of fish caught are well up on the last two or three years, with a senior brown trout of just over four pounds the biggest caught to date. Water quality remains reasonable and clarity is good, there is just not very much of it and bank side tree roots that are normally submerged stand proud of the water. Recent rain has done nothing for the aquifers and if a man in a van with a clipboard and toetectors tells you otherwise call him out as a Dimbulb before boxing his ears. 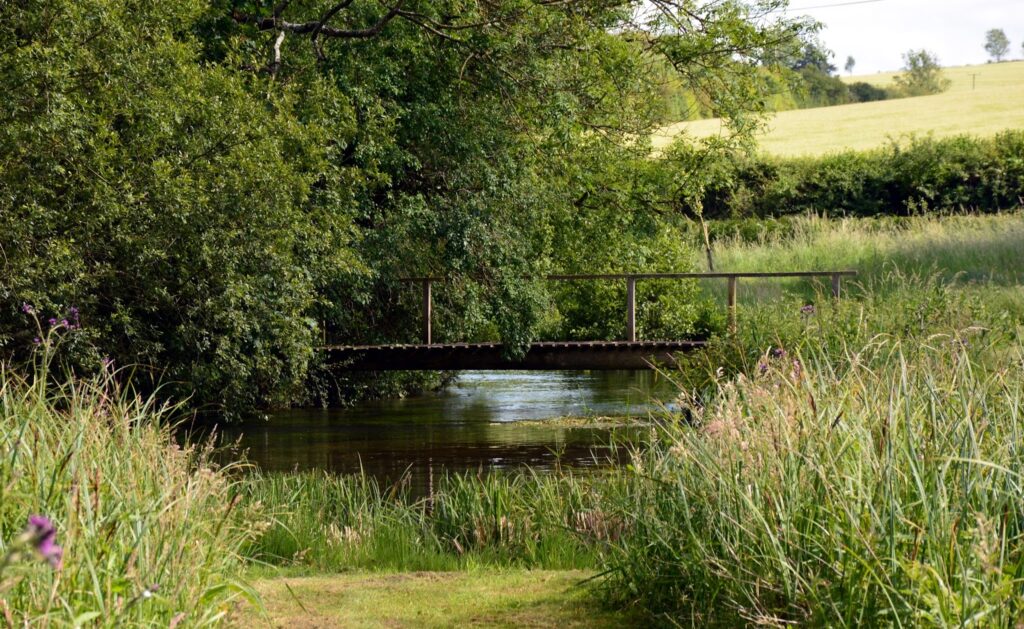 Recent rain has however done a tremendous amount for vegetation and most green things have shot up at an exponential rate. The wind that seems to have been blowing since the middle of March caused havoc with some top heavy willows that consequently leaned over a little too far and blocked the path through the wood and I was forced to fire up the orange saw and blunder about in four foot high nettles to resume access. Many of the bank-side willows have also dropped a little closer to the water and yes, some of those reaches that were identified by some as being too open at the end of the winter now exhibit vegetative growth that must be considered when casting a fly. Willow in water meadow will grow at an incredible rate and must be treated harshly in the winter as a result.

Here’s one of the area that Lord Ludg went at with chainsaws the winter before last. Some substantial willows had become exposed to wind after a hundred or more Christmas Trees that afforded them shelter from prevailing winds fell over during floods. Exposed to the wind the willows fell in the river, we cut them back to the stumps and for a few months the area assumed an apocalyptic air.

Bankside Willow management on chalk streams is very important. Crack Willow is the Ming the Merciless of the arboreal world and is on a quest to conquer this planet and the next. It will succeed if left unchecked and chalk stream biodiversity will be reduced as a result. I may have said it before, but chalk streams must be managed, they can’t just be let go and if a man in a fine fleece with “Born to Rewild” embroidered on the back tells you otherwise, for the appropriate course of action see above re- man in van with clipboard and toetectors.

Hatches of Olives and Sedges are slowly building and one day this week during my early morning perambulations Otis and I came across a huge cloud of dancing olives, biggest I’ve seen since we were in Scotland on the Carron where there were many of the Blue Winged variety. The Fish may not care for too much for them other than as a nymph, but there are many Damsel flies around at the moment. Walk through the thick fen or lush meadow grass and squadrons of the malachite green insects take off. 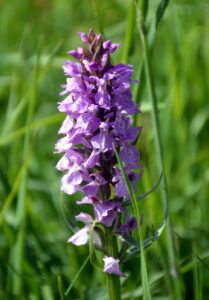 While we are on meadows, marsh orchids are having a high old time of it.Theyseem to have appeared a little earlier than previous years and I can prove this by clever couple of clicks in my extensive catalogue of digital photos (approaching six figures) compiled over the last decade as I always get excited by orchids and rush up the river to photograph the first one that appears. “properties” buttons confirm that they have appeared nineteen days earlier than last year and twenty four days earlier than the year before that. 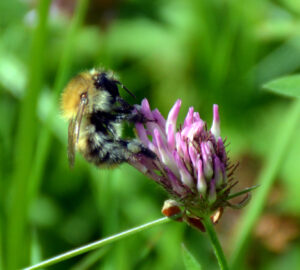 Now I could go on at length here about a theory I developed while walking about with my strimmer as to dry winters/depleted aquifers causing stresses that result in some parts of nature trying to get things done and dusted before parched conditions kick in towards the end of summer. I’m still mulling over the finer details, Orchids are renowned for the portential potential and I and may need to do more strimming to sharpen up my theory and hey I’ll be called out as a crank once again, but what’s new?

We’ve a goof of a Barn Owl about at the moment (the wise old owl thing is a myth).

It’s feeding young somewhere nearby and hunts regularly in the morning and evening over the meadows and grass verge that borders the lane. We have seen numerous rodentia, from the smallest shrew through to ratus norvegicus, thrilled at their first experience of flight unaware of the grim end that awaits them at their destination which will not include walking on the beaches looking at the peaches.

And I thought security at the airport that serves the Highlands and Islands was the worst experience about flying. 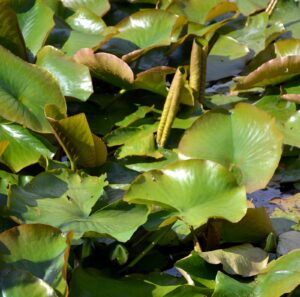 I don’t know how this happened but Child A turned 24 this week. Things may have gone awry when I was putting the clocks forward or we are all just ligging about in an episode of Quantum Leap, but I am sure I picked up her from the school bus stop only yesterday afternoon.

Further evidence of Quantum Physics and the failure of organising time with an eye to daylight management:

Child B has finished his studies at Cardiff University and will once again be plundering our fridge.

Which can’t be right as he only started secondary school last week and he must be doing things arse about face as isn’t he currently revising for his O levels?

And if further proof were needed that the world has turned on its axis and is now spinning the other way, in a few weeks time The lady who sleeps on my left and myself will have been married for twenty five years.

How did that happen? 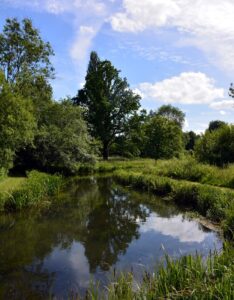 Now I’ve oft called to book the likes of Sam Fox, Chris Evans and Kylie Minogue over their interpretation of time, two of the above were once older than me and played significant roles in an older woman fantasy throughout several of my teenage years,

I’m older than the pair of them now.

From this we can conclude that time moves at different speeds for different people.

My own withered husk and addled mind points towards a life lived on fast forward,

While Madam’s seems to have been stuck on pause and stands as a testament to taking marriage one day at a time.

We are where we are. 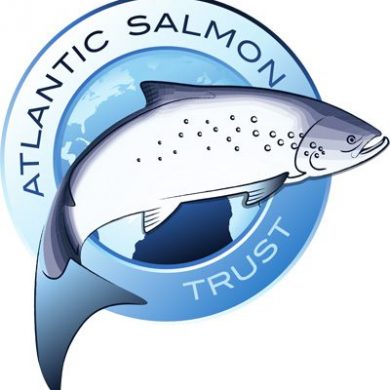