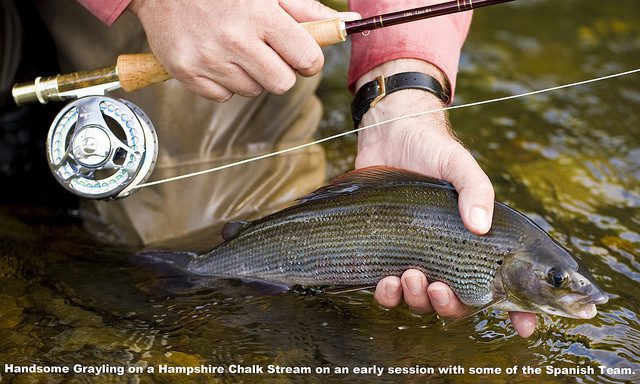 I was lucky enough to catch my first grayling on the fly, many years ago and quite by chance whilst fishing for trout one summer afternoon near Thorverton on the River Exe. From there developed a passion for this lady, shared by many today. This delicate, small gleaming silver encounter with amazing dorsal and unique fragrance, was caught on a small Silver Invicta in shallow ‘popply’ water. From there, having been lucky enough to fish many different waters and venues in this country and abroad, I have tried many different methods, some more successful than others for catching grayling and many other species.

Dry fly for any species, has to be the favourite for me but whilst it can be very effective there are often other methods that can and will be successful when the dry fly is not in favour. Small nymphs for grayling on the river can be a delight, as well as extremely effective for browns and coarse fish too.

I was first introduced to the finer art of proper upstream nymphing, when invited to fish the annual ‘Champion of Cantabria’ matches in Spain some 14 years ago for trout. Here some of the best fisherman in Europe, even the world, would contest this elite event on gin clear premier waters in the mountainous Cantabria region of Northern Spain. Publicly accessible water in Spain is scarce and where available, either too warm for game fish or very heavily fished and one has to be extremely efficient to even see, let alone extract any fish from these waters at all.

The Cantabria match however, permitted exclusive access to some premium private waters and whilst the fishing there was like targeting fish in a goldfish bowl, (because the water was so clear), catching them was an entirely different matter! Just getting near them was a challenge in itself. You would perhaps get one chance at a cast and the locals would say “if slam the car door shut when you leave the car you can forget catching anything nearby all day!” Stealth and guile, practised by the Spanish and French anglers at that event had been perfected to a level over the years, which I had never seen before. Their fly tying was extreme, not so much in any advanced new patterns but more in their finesse and under-dressed, highly effective simplicity. It comes as no wonder these two countries have featured so many times at the top of world and European fly fishing competitions. 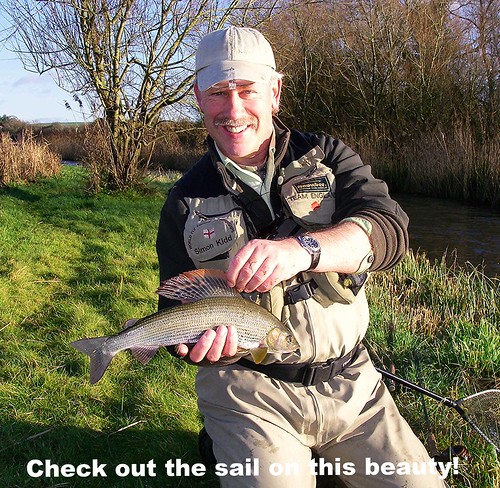 We fished barbless flies only and there were leaders being used as long as fly lines at times…and thinner than hair almost – yes ok that’s an exaggeration… but they were longer than any I had seen before and many were using traditional silk fly lines to assist their presentation. This was an art to admire and respect. The enjoyable visits to Cantabria over a period of about 5 years was invaluable, and the merits of fishing a single well-presented wet fly or nymph, were ‘etched’ into me as a pleasure and competition angler in addition to the ever desirable dry fly.

Whilst for years, I had been practicing upstream nymphing and trying to get my two or three flies at the bottom of the river to move at a pace slower than the surface water, I learned that I could catch just as well if not better now using a single small fly. Even smaller and slimmer than I was used to in could catch even more fish, especially in certain river conditions and across difficult, and favoured, fish lies, with so much control and less fear of spooking them. Plus I would stalk fish in the river now, instead of just casting and fishing blindly hoping for the best and be more productive at the same time. If I saw a fish, unless I did something wrong, I had every confidence I was going to catch it! 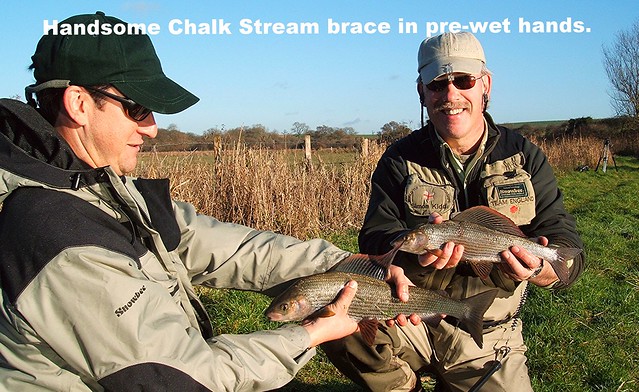 The secret of this new method, was to present a fly as far upstream as I could, over the head of a lying fish if necessary (without spooking it or others nearby, hence the long leader necessary) and then as the fly approached the target fish, to draw the line back towards me! When it works, the line tightens almost as one starts to draw the fly back. It feels unnatural at first to move the flies but it can be so effective and will ‘induce a take’, where a dead drifted fly will often be allowed to pass unchecked by a fish. When the fly moves up in the water a little, from a good depth it is such a natural movement, the fish can barely stop themselves from taking the fly.

Achieving the long upstream cast on a light tapered leader, allows the small fly to reach sufficient depth before ‘inducing the take!’. The finest tippet possible and the longer, lighter the rod available can help too by reaching as far as possible into the air with the tip, slowing down any drag caused, with as little fly line as possible lying on the water surface. My preference is to use something like my trusty 10-11ftft #3wt Prestige, an XS plus Thistledown or preferably XS plus ‘Nymph’ line and then a knotted tapered leader some 20 feet long tapering down to 0.08mm. With this set up and a small nymph from size 16 to 21 or occasionally smaller I can now reach around 40ft from where I am standing and pick fish off at will, as I make my way upstream. All the benefits of Tenkara style fishing if you like but with a reel for more control and range wherever needed.

When fishing the southern chalk streams, typical of Wiltshire and Hampshire, this method can work exceptionally well where permitted, and one can actually see all that is happening. This is not always possible with certain freestone North Country rivers typical to us of course and less easy to see where fish are lying. Here it is more a question of reading the water well and presenting the fly (flies) where one believes a fish to be and with the same confidence, concentration and control as if we knew it was there. One or more flies can be used to fish the method but it is effective with just one, if the water and conditions permit. Catching more than one fish at a time, often results in disappointment when trying to land both of them and simply wastes a fish in competition, when that happens they won’t come back when one gets away! 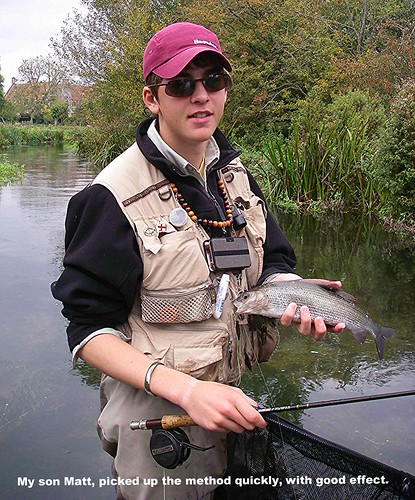 So fishing a single fly well, can be better than two or more, fished not so well but there are times of course when two flies can be advantageous, as indeed we found on another occasion, when grayling fishing in Slovakia and again in Sweden some years later. On the Slovakia occasion a big heavy fly was used on the point to get both flies down on or near the bottom in heavy, fast running water, up to 3ft deep ideally. We were fishing with a Czech Nymph style, I often refer to now as ‘Slovak Nymphing’. As the heavy point fly touches the bottom in strong flow, the lighter and much smaller dropper fly, fished on a longer than normal section e.g. 6-14 inches dropper length, is pushed down towards the bottom by the flow and resistance of the point fly dragging the bottom. As the point fly grips, the dropper is first forced down and then swings up again as it stops altogether or as the point fly releases.

This method, in fast flowing water, can be immensely successful for grayling especially, done properly, and it’s not so much the patterns but the behaviour of the flies which is often so critical. A change in pattern when the fish get bored or used to the same flies going past can produce more takes from a shoal of grayling that have seemingly ‘switched off’ too. Lifting flies or tweaking them sideways, can still very often provide impulsive takes from an inquisitive fish, unable to resist the temptation to grab hold. Occasionally grayling in particular will take the sacrificial point fly too, resulting in a bonus fish.

Drifting flies close to the bottom and stopping the cast or lifting the fly (flies) gently as they pass or approach a target fish will often take grayling or trout. When close to the fish it may be enough to just see the gills flare as the only giveaway to indicate the fish has taken your fly too. Fishing a clear stream can lead to so many advantages, when seeing what the fish can do in relation to your actions. Even if expensive for a day or few fish available, if there’s action you’re learning and I am indebted to Larry Johnson II for his insistence that I join him on some of his chalk stream trips to experience this first hand. Able to see and watch how every fish reacts, can add so much to the success when next out on any river. If you are lucky enough to have observation or can generate ‘sub-surface vision’ as I think Chris Ogborne used to refer to it, it is a huge advantage. When encountering an unknown water in the future and primed for the next hopeful take inspire movement in a natural way and reveal an amazing increase in success and hook ups done properly. 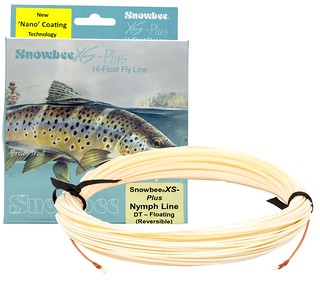 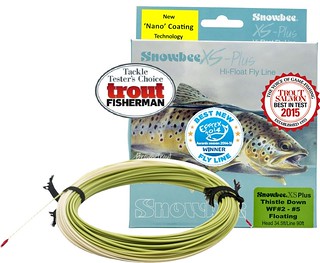 The Spanish modern approach and use of fly lines, sparked a benefit we had never achieved before at Snowbee, until first trying the early new core and primer samples of a new concept in fly line production for us, on the River Otter one wet and windy afternoon. With the ultra-fine core and new Primer technology we were working on, here was a potential fly line development that could out fish any conventional fly line and its ‘multi-purpose’ #2-5 weight and method options, were to develop a fly line to exceed the expectations of anglers universally. The result became our Thistledown and Nymph lines, which for 2017 we have advanced still further, with Thistledown²; a new low stretch braided core now, with new higher floating XS Nano coating and pre welded loops at both ends.

Fly choice can be extreme but simple, small lightly dressed natural imitation patterns of Nymphs or Shrimps for Grayling can be deadly with some weight or small tungsten beads with lighter leaders to reduce drag and help the fly sink to initial required depth important. On good days upwards of 50 and even 100 Grayling have been achieved on the healthy chalk streams of Southern England, using this single fly method.