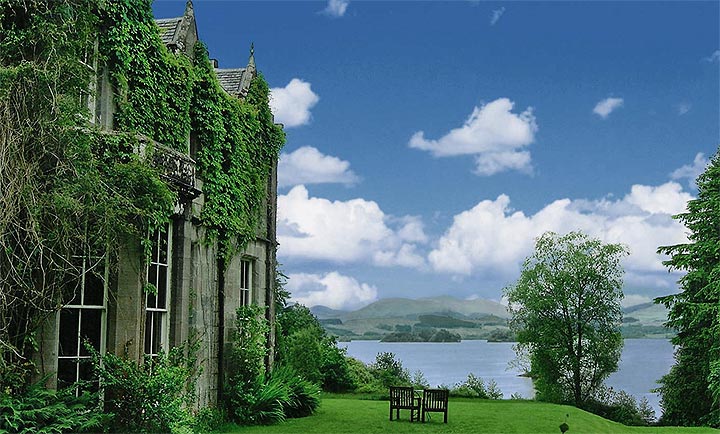 The Beauty and the Beasts of Loch Awe

After three days blanking on the Aberdeenshire Dee, I rose to an invitation to fish Loch Awe like a ravenous trout. We were to stay at a hotel called Ardanaiseig and enjoy an afternoon of guided trout fishing from one of the hotel’s two boats. When?  Tomorrow!

Mid-July 2016 in Scotland was for some reason doing a very good job of pretending to be April (global warming?) and a cold, bright mix of sunshine and showers followed us around every turn as we wound our way south west.

Ardanaiseig is wonderfully situated in a remote corner on the western shoreline of Loch Awe at its mountainous northern end. The Loch in front of the hotel turns at right angles north-westward to pour down the river Awe through the spectacular Pass of Bander.  The point of land that this creates gives the hotel it Gaelic name, meaning “the point by the ferry”. Indeed, it would certainly be quicker to go the nearest shop in a boat rather than by car.

The hotel and its grounds sit as if hosting a TV period drama and it is easy to understand why this Grade II listed Scottish Baronial house has won so many awards including Scottish Intimate Wedding Hotel of the Year for three of the last seven years. It is elegant and beautifully furnished, yet quirky and very comfortable. The current owner, Bennie Gray, is by all accounts an art dealer and the hotel’s eclectic and stylish décor is a credit to his taste and sense of humour!

Our room was the luxurious and spacious, “Etive” – a Master Garden View Room, which exuded an air of old-fashioned opulence yet incorporated all the modern conveniences one could hope for. I very quickly decided that I should leave my fishing boots outside.

I met my ghillie for the afternoon, Steve Speck at 3pm just as the rain stopped and weather calmed. A gentle breeze riffled the loch and it looked beautiful. All aboard one of the hotel’s two boats, we tootled along the western shore southwards and chatted about the hotel, loch and its fishing.

Despite its sporting-lodge roots the hotel hasn’t yet promoted itself as a ‘fishing’ hotel with drying rooms, rod racks and tweed-clad folk in attendance, however, the 50 plus single malt whiskies in the bar made it close enough for me. Nevertheless, Steve, the hotel’s maintenance manager and keen fisher himself, is always delighted when guests want to be on the loch!

As we cut through a nice fishing ripple toward our first drift, I scanned the lovely open water toward the nearby island of Inishail, and then out of nowhere, big pale-green mayflies started to appear on the loch. I couldn’t believe my eyes – or my luck! It was mid-July and yet there they were, large as life – like randomly isolated yachts bobbing and drifting with the breeze.

Then suddenly, about 100 yards from the shore and perhaps 30 yards from us, “splo-doosh” – a heavy trout rose. Correction – a VERY heavy trout rose – a beast of a trout.  And then another, 20 yards behind us. These were no ordinary mountain-loch trout but big 3lb fish or bigger! I frantically changed flies to mayfly nymph on point and bushy sort of dry on top dropper (Oh for want of the correct fly!).

We chased rises. Wherever I cast it went quiet. Splo-doosh behind us, Splo-doosh way in front of us, Splo-doosh way to the side of us. And then soon after, as if I’d failed a test, the whole loch – all 25 miles of it – went as flat and glassy as a garden pond – and the rising stopped.

I thought of a recent seminar given by England International Fly Fisher, John Horsey, where much to my surprise, he’d announced that, “sunny and flat calm were his favourite conditions”. But sadly, I couldn’t remember why?!

Sitting, becalmed on Loch Awe was, however, breathtaking and to cap it all, as we chatted, an osprey flew over and showed how easy fishing really was when you have the right equipment.

We sat transfixed as it caught its “high-tea” and carried a plump perch back to the trees. Then, as if the Loch was having a last laugh, a great black throated diver steamed past us surfacing occasionally like an otter on performance enhancing drugs. Clearly, there are plenty of fish to go around in Loch Awe.

We headed back with Steve trolling a small plug behind the boat. Steve told me that many guests enjoyed going out on the loch for a couple of hours trolling, with tackle supplied by the hotel. I must say, I thoroughly enjoyed it too. I sat back, relaxed and absorbed the wonderful scene and the clean, fresh air of Loch Awe.

As we rounded the point, within sight of the hotel, Steve’s trolling rod bent into a fish and after a lively tussle on light tackle, a smart little jack pike was netted and released. This was just reward for Steve’s efforts and a nice way to finish off a very enjoyable afternoon’s fishing.

My wife meanwhile had spent the afternoon very happily exploring the hotel’s gardens and substantial grounds which have a semi-wild, rich abundance reminiscent of Heligan. Pathways lead here and there offering miles to explore and viewpoints to enjoy.

That evening, after sipping an aperitif in the cosy library bar overlooking the loch, we dined in splendour. My wife and I have watched enough Master Chefs to know what good food should look like. And wow, we were impressed.

We were delighted with our choice of seafood for starter and entrée, accompanied by a fine, crisp Chablis. Starting with the most exquisite scallops, complemented by sweet textures of carrots and crispy prosciutto, we then enjoyed the fillet of halibut with sweet potato, quail scotch egg and savoy.

The chocoholic in our team was then smitten by the smooth dark chocolate pot with orange jam and white chocolate mousse whilst I devoured a toasted Scottish tea cake bread-pudding with lemon, rhubarb and vanilla.

Our dinner was special by any standards and Ardanaiseig can be justly proud of its chefs and restaurant team.

It is very rare that my wife is eager to join me on a fishing trip but if I suggested returning to Ardanaiseig she would be first in the car. Which tells me, that tucked away in the magnificent landscape of Loch Awe, we have found something truly unique in Ardanaiseig – a luxurious, romantic hideaway where you can indulge your loved one and take your fishing rods! 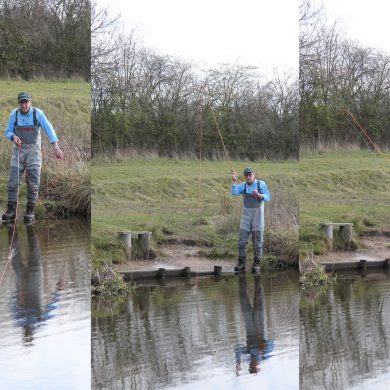