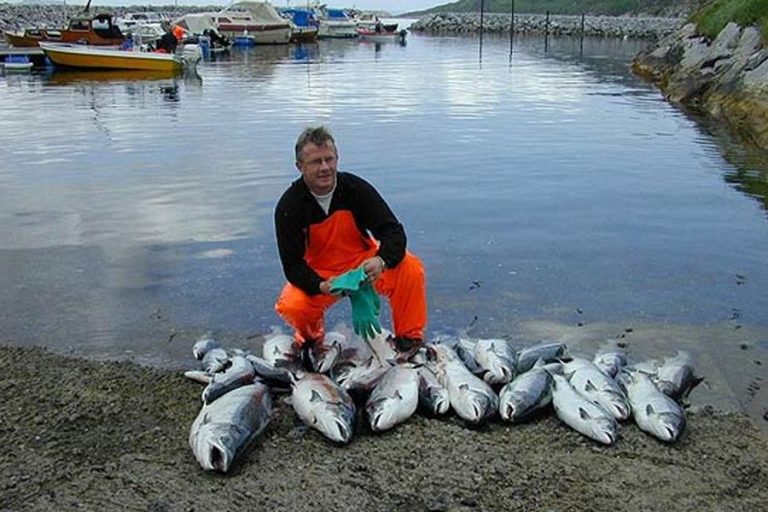 Approximately 300 people attended the Alta Wild Salmon Conference hosted by the Alta river owners, Norwegian river owners and others. Torfinn, Tor-Erlend, Vegard and Hans Kristian did a magnificent job putting together a very important and successful event, which was mostly a sad gathering of people appalled at the evidence of the fast disappearance of wild salmon in Norway.
His Royal Highness King Harald, an ardent salmon fisher, was the guest of honour. The Norwegian minister for the environment, the minister for fisheries and some of Norway’s leading scientists were among the speakers. Top salmon experts attended and most leading conservation groups were represented.
A depressing paper with the rather misleading title of ‘Quality Standard Report’ was delivered by Eva B. Thorstad a scientist at NINA Nature Research Institute. Far from presenting an encouraging picture it showed that there was mostly only bad news to report from the historically great rivers of Norway.  In short, when taking into account the genetic integrity, spawning stock targets and harvestable surplus, only 22% of Norway’s salmon rivers could be classified as being good and environmentally sound.
Dr Trygve T. Poppe, a professor at the Norwegian Veterinary College, painted a very black picture of the situation.  He proposed a total clean-up of the entire fish farming industry and suggested that unless drastic actions were taken now game fishing could be effectively over within five years. Meanwhile the Norwegian Government intends to continue mixed stock netting of Alta fish. The killing of Russian spring salmon, using the deadly nets known as krokgarn, so lethal they are banned in other countries and other parts of Norway, will also go on, although the practice is in violation of the UN Law of the Sea Treaty. The Sami Parliament President declared that this illegal netting will continue and should accelerate.
Kjetil Hindar of the Norwegian Institute for Nature Research (NINA) is a leading international scientist on salmon genetics and evolutionary ecology.  He presented a paper evaluating population genetics, conservation biology, the state of salmonid fish and the effects of hybridising and farmed salmon escapes, conservation biology and the threat of genetically modified organisms. His paper revealed the genetic impact of farmed salmon on the wild salmon population. It showed that 65% of Norway’s salmon rivers were affected and that 20% of them had already suffered serious damage. Data provided by the fish farmers in Norway claims that only about 378,000 of their salmon escape yearly but scientists and stakeholders believe the annual average may well be more than one million.
The government ministers, both relatively new to their posts, promised better and stricter governance of fish farming and netting activities. That aroused strong criticism as similar promises have never been honoured in the past because of the very lenient interpretation of regulations, monitoring and policing. The condemnation of the government’s record from the angling interests was especially strong. One of the problems is that Norway has a very strong socialistic dynasty that dominates their governments and parliament and this promotes a blinkered continuity that blocks cooperation with the private sector and the fundamental changes needed.
A strong team of NASF conservation partners, including NASF Chairman Orri Vigfússon, attended the meeting.

“Giving more power to people who have already failed so miserably won’t work. Their flawed ideas will never help the wild salmon either in Norway or the North Atlantic generally. The refusal of the Norwegian Ministry of Environment to work with stakeholders has effectively contributed to the decline of this Norwegian treasure.”

Mr Jens Olav Flekke, Chairman of NASF (Norway) – Redd Villaksen, pointed out that the production of 1.2 million tons of salmon in fjords has seen Norway lose control over escapes and sea-lice saying:

“The plague of sea-lice in the fjords is damaging wild salmon and sea-trout. Due to uncontrolled use of chemicals and medicines the lice have become resistant to all known treatments and are now unmanageable.

Official escape statistics show that 200-300.000 salmon escape per year from the pens. This number represents 50% of the wild salmon population. But fish farmers have a problem explaining a loss of 2% of their stock and that amounts to approximately 6 million fish. Escapes from smolt is not counted for. All farmed salmon must be tagged to end this confusion.

In two important salmon fjords, Repparfjord in Finnmark and Førdefjorden in West Norway, two mining projects are about to be realized. Huge quantities, millions of tons, of polluted waste will be dumped into these fjords. Protests are being held in Førde and later in Repparfjord.”
Orri Vigfússon added:

“Thank God we have committed young people in Norway who are prepared to stand up to the mining madness that will destroy two very important habitats for wild salmon.  Norway had no policy, no destination and no intellectual role in wild salmon.  The problems dominate the government and the run of events. NASF calls on the Norwegian Government to develop and employ a completely new Salmon Policy and a practical action plan that will enlist the help of a revised team of experts with new visions and the ability to rebuild this national resource treasure.

The Government of Norway must seek cooperation with the private sector in areas where creativity and intellectual expertise have proved successful. Norway needs new leaders to restore wild salmon stocks to their historic abundance.  Dr Poppe is correct, if this isn’t done soon, it will be too late.”
The North Atlantic Salmon Fund is a global coalition of voluntary conservation groups that have come together to restore stocks of wild Atlantic salmon to their historic abundance.