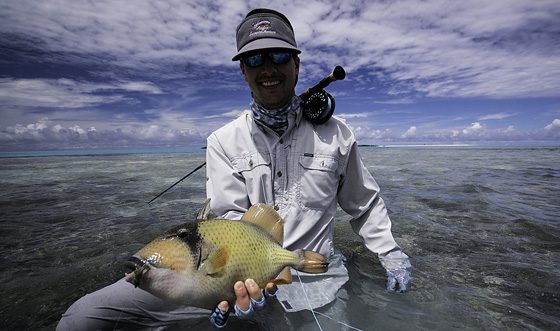 Flats fishing is driven by the tidal movements and this week our guests got lucky with the end of a big spring tide shifting into a cool, slow-moving neap cycle. The large water movement at the beginning of the week allowed the team to get out to the surf areas and then cruise the flats looking for GTs on the full highs.

As the week progressed the water movement slowed down and the finger flats started to show signs of some very happy triggerfish. Fishing for triggers is, by far, one of the most challenging yet rewarding experiences out here and this season it has been extraordinarily good with countless daily shots at tailing fish and many hook-ups.

This week was no different with triggerfish dominating the catch and 14 were landed in total and almost double that number were hooked. Some of our guests got stuck straight in on the first day whereas others waited until two minutes before lines-up on the last afternoon to get their entry card to the triggerfish club!

Larry Dale got on the list early by landing a moustache and a yellowmargin over two days. Donald Lee Kelly ticked the box soon after with a big yellowmargin, Wilson and Nelson Jaeggli also joined the party and next to follow were Peter Beck III with two moustache triggerfish and Pete Dale with a yellowmargin. Finally, after many hooked and lost fish, Eddie Dale’s perseverance paid off as he landed a yellowmargin.

The bluewater this week was also fruitful and a special mention goes out here to David Hall who, through his multi-annual trips to Alphonse over the years, has become part-guest, part-resident. In all his time here, however, he had not been able to put his gloved hand onto a sailfish’s bill. This was by no means due to lack of effort, skill or fish as a whole array of issues have prevented Dave from landing around 27 hooked fish: fly lines breaking, hooks pulling, leaders breaking and hooks bending open… whatever could have gone wrong did. Still brimming with motivation, Dave set out to get the job done this time with our bluewater boys Bertrand Labianche and Jeffery Labrosse and they helped him lift his first sailfish onto the boat!

This was not the only sailfish of the week as Nelson Jaeggli went out one morning and managed his first sailfish on fly, before getting onto the finger flats to catch his all-important bonefish and qualify for the ‘Bills-and-Bones Slam’ and happily went off to dive the outer reefs. The Sunil family also spent much of their holiday on the bluewater going for that big fish and their days on the water paid off when Sunil Suresh landed his first sailfish on fly and Sonakashi her first yellowfin tuna on fly later in the week.

Tight lines from Keith and the Alphonse team. 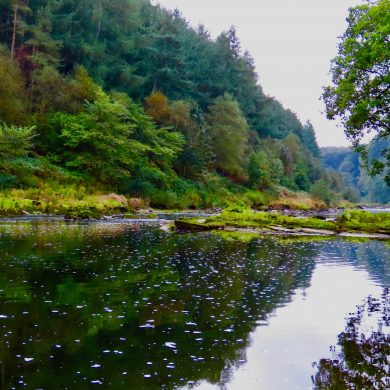