The Esk District Salmon Fishery Board (EDSFB) has expressed its outright opposition to and anger at the Scottish Government’s decision, contrary to internationally accepted conservation guidelines, to extend the coastal salmon netting season for Scotland’s biggest wild salmon netting company into September.

In an unprecedented decision Scottish Government has announced that it is granting a licence to Usan Salmon Fisheries permitting it to net and kill salmon between 1 September and 14 September – after the end of the statutory netting season on 31 August – for three years from 2012. Ostensibly this is “to compensate the fishery for disruption” caused by Marine Scotland Science having “access to fish and genetic samples during the commercial fishery season” for tagging research purposes.

Hugh Campbell Adamson, Chairman of the EDSFB, commented: “We are perturbed by the Government’s unilateral intention to allow netting in September. It makes no sense at all from a conservation perspective to permit any additional pressure on salmon stocks”.

Mr Campbell Adamson continued: “Usan has been paid a generous £30,000 for its assistance in procuring 95 salmon for radio-tagging between February and April. EDFSB’s offer to make a cash payment to Usan as compensation for the minor disruption caused by the tagging programme in May and June has been spurned by Scottish Government. Instead, in a move that is recklessly irresponsible, it is licensing Usan to kill up to 1,000 more salmon (with a potential gross value of some £50,000) in exchange for tagging and releasing a mere 60 fish. In other locations, where netsmen provide salmon for scientific research purposes, they are simply reimbursed for the commercial value of the fish”.

Mr Campbell Adamson added: “Scottish Government’s approach to salmon conservation is woefully inconsistent. It regularly exhorts Fishery Boards and anglers to reduce exploitation through catch and release. This advice is being heeded on the River South Esk where in 2011 anglers caught just 672 salmon, of which well over half were safely released back into the water. In contrast Usan’s nets in the South Esk district killed 6500 salmon last year. It beggars belief that the netting season is now being lengthened”.

Issued on behalf of the Esk District Salmon Fishery Board by Andrew Graham-Stewart. 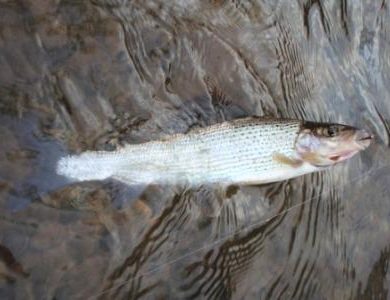 Fishing on the Frontier – Part 41: Low River Winter Grayling
This website uses cookies to improve your experience. We'll assume you're ok with this, but you can opt-out if you wish.Accept Reject Read More
Cookies Policy