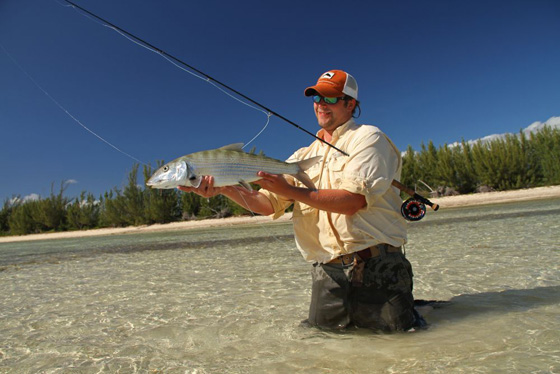 Your Bahamas: Diary and Events

The Islands of The Bahamas – Diary

As part of our celebration of visiting and angling in The Islands Of The Bahamas we have asked key anglers who have spent time fishing there to share their thoughts and experiences. In the latest of our diary features from The Islands Of The Bahamas Pete McLeod, of fly fishing holiday specialists Aardvark McLeod, takes a look at a couple of items of interest from Grand Bahama Island and The Abacos.

Always known for its large bonefish and other species, we have again been pleasantly surprised by the number of double digit bonefish landed from H20 Bonefishing in Freeport and North Riding Point on the south coast.

What has been of particular interest is the number of permits now appearing on these flats. Although The Bahamas is not a name synonymous with permit, the guides at H20, led by Greg Vincent, have spent a lot of time looking for them and now have found some excellent spots which have proved to be very fruitful indeed.

One of these areas will be the Marls of The Abacos which is great news for The Abacos Lodge, the Delphi Lodge and Deepwater Cay Club as this is on their doorstep. This further conservation measure will aid the protection of the natural habitat for bonefish and other species and bodes very well indeed for the future of fishing in The Bahamas.

Our first diary offering was from Peter Mantle of The Delphi Club, The Abacos.

In just a few more weeks the main bonefishing season gets underway in The Islands Of The Bahamas and here on The Abacos we’re frantically busy getting ready for what is my favourite time of the year.

From mid-October to mid-December the bonefish of The Abacos form up into large schools and the fishing frenzy reaches its peak. It’s far from uncommon to see boats getting twenty or even thirty fish in a day, with the record standing at over sixty!

Following our fantastic sixth season that ended in June, we all take a breather to avoid the worst of the hurricane season but Max, the manager, has been busy scouting new flats and finding lots of exciting new species to fish for, including some exceptionally sporting – and big – jacks, ‘cudas, sharks and snappers on fly.

With the Delphi Club record for the biggest bonefish smashed this past spring by Bob Rusby’s 11-12 pounder, we’re also learning more about how to nail the really big bones. And with permit and tarpon sightings (but sadly not catches) increasing every year, The Abacos now offers a lot more than just multiple bonefish from the glorious expanse of the Abaco Marls – one of the largest areas of mangrove flats in the world.

The summer has also been dominated by a debate over the government draft proposals for regulating bonefishing. We all want to see a sensible and reasonable, conservation-led regulatory regime. The new draft is likely going to feature a new license requirement, which will support a better protection of The Bahamas’ world-class flats fishing resource.

The Islands Of The Bahamas have a huge expanse of flats fishing. So much so that one rarely meets anyone else at all during the course of a day on the water – total tranquillity, an unspoilt environment, and loads of fish – what more could you ask for?

The Islands Of The Bahamas – Events Calendar

All anglers are competitive by their very nature, whether that is competing against ‘just’ the fish, or indeed pitting their skills and watercraft against other anglers. If you are looking to fire your competitive angling spirit then there are plenty of events staged throughout The Islands Of The Bahamas from light-hearted open-to-all competitions with a party atmosphere to some of the most prestigious big game angling competitions in the world, attracting some of the best anglers on the planet.

If you are heading to The Islands Of The Bahamas this year then you still have time to take part in, or to be a part of, the following events:

The annual Deep Drop Fishing Championships will be held in Nassau with boats leaving from the Hurricane Hole Marina.

Precise dates for next year’s schedule are yet to be fixed but the calendar of events will start again in February 2016 with the prestigious Bahamas Wahoo Championship, which is a series of four wahoo tournaments in pursuit of one of the most iconic gamefish, reputedly the fastest in the ocean.

The Bahamas is known world-wide as a prime location for the species and the Wahoo Championship is designed to challenge the best skippers and anglers and it coincides with major wahoo runs in the participating resorts.

Or, if you are planning to visit The Islands Of The Bahamas in 2016, you can be sure of an exciting and diverse programme of events to spectate at or, better still, take part in! These include:

This event caters for anglers wishing to visit The Abacos and fish for white marlin. A separate ‘fun’ category recognizes the largest tuna and wahoo caught during the three days of the tournament.

The Bahamas Billfish Championships, sponsored by Rolex, is considered to be the premier fishing event in The Bahamas and the first leg of the five-leg championships kicks off in April and attracts some of the best billfish anglers in the world fishing for reputations and hundreds of thousands of dollars in prizes and cash.

This Deep Sea and Bottom Fishing Tournament has been fished for thirty years. It is family oriented and caters primarily to local fishing enthusiasts but visitors wishing to visit The Abacos to participate are warmly welcomed. All levels of fishing abilities, including children, are encouraged.

The second leg of The Bahamas Billfish Championship, sponsored by Rolex, is hosted at Abaco Beach Resort where you can take the opportunity to visit the popular tourist strip that offers excellent shopping, Bahamian cuisine and live entertainment.

The ‘Shootout’, jointly sponsored by the Bertram and Hatteras group of companies, is the crème de la crème of tournaments held in The Abacos and select groups of clientele grace the event each year seeking to exact revenge against their contemporaries.

Deep Sea Fishing has a home in White Sound, Elbow Cay and this event caters for anglers of all abilities, including novices, visiting the Abacos fishing for blue marlin and tuna.

The Treasure Cay Billfish Championships caters for a cross section of anglers and is a major event for northern Abaco. The event also features beach volleyball and a native arts and crafts show on the final day.

This is the final leg of The Bahamas Billfish Championship, sponsored by Rolex, and will attract highly experienced deep-sea fishermen all vying for the hundreds of thousands of dollars in prizes and cash.

Spouses of the anglers participate in a People-to-People Luncheon and silent auction for charity, while the overall results for all of the legs are tallied and a festive awards banquet is prepared by the organisers.

The Bimini Hemingway Festival and Fishing Tournament will be held at the Bimini Bay Resort.

The tournament will be held at Hurricane Hole Marina, Paradise Island and will feature prizes and a grand trophy for the largest tuna.

The fifth annual Bahamas Rotary Tuna Classic Tournament will be held at Hurricane Hole Marina, Paradise Island and will feature prizes and a grand trophy for the largest tuna.

If you are looking for a break from your fishing, or looking to enjoy the huge diversity of opportunities the Islands Of The Bahamas offers with a partner or your family, there are a large number of non-angling related events to enjoy, starting with the famous Junkanoo Summer Festival

Junkanoo Summer Festival is a Ministry of Tourism event that showcases Bahamian culture and heritage at its best and it takes place during the months of June and July with art, culture and music to the fore and local and national entertainers joining the Junkanoo groups to parade through the streets in a riot of colour and rhythm.

The liveliest and largest of the Junkanoo party parades is in Nassau, but you can also experience the carnival atmosphere on Grand Bahama Island, Eleuthera/Harbour Island, Bimini, The Exumas and The Abacos – so why not take part where you are fishing, or island hop to enrich your Bahamas experience!

In August there is also the Goombay Summer Festival, an event is hosted by the Ministry of Tourism, which showcases the cultural heritage in Rake n’ Scrape bands, dance groups, limbo, drama, food, drink and authentically Bahamian art and craft, climaxing with a Junkanoo parade and Goombay dancers. It all starts in downtown Nassau but extends to other islands too in a month-long celebration.

The summer months also see a number of regattas taking place across the Islands Of The Bahamas including: The Grand Bahama Regatta and Heritage Festival on 17 -18 July at Taino Beach, Grand Bahama Island, and the Rolleville Homecoming and Regatta in The Exumas from 30 July to 03 August. Later in the year the North Eleuthera Sailing Regatta is one of the largest racing events in The Islands of The Bahamas, with Class A, B, and C native sailing sloops taking to the waters off North Eleuthera, Harbour Island and Spanish Wells. The onshore activities include a church service, cultural shows, Bahamian food and drinks and nightly entertainment with live band performances.

Seafood lovers can indulge their passion in August with the North Andros Seafood Festival and the Lobster Festival in The Berry Islands and then October is designated as Restaurant Month with events such as the annual Taste Our Bahamas Festival – A fabulous food festival featuring a culinary competition among all of the Islands Of The Bahamas with live music and cultural entertainment for the whole family. Then, on South Andros, there is the Mars Bay Conch Festival from October 9 – 12 which showcases the history and culture of ‘conching’ and features a number of cultural activities including conch cracking, skinning and eating; conch cookery competitions; conch hunts and relays! There will also be other local food and drinks, children’s games and activities and a Junkanoo Rush-out. The venues are Mars Bay Blue Hole Beach and Mars Bay Community Park, South Andros. For further information Tel: +1 242 357 2150 or +1 242 369 5019.

Start typing to see results or hit ESC to close
salmon fly fishing chub roach pike
See all results
More Stories
Stories from the Castle
This website uses cookies to improve your experience. We'll assume you're ok with this, but you can opt-out if you wish.Accept Reject Read More
Cookies Policy