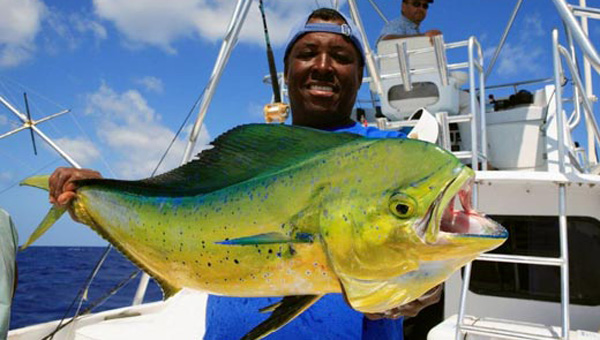 With over 50 angling records in the books the Islands of The Bahamas are one of the most iconic angling destinations on the planet offering idyllic islands, warm seas, extensive flats, reefs, mangrove fringes, deep oceanic water, vastly-experienced guides and well-appointed lodges.  All in all it is year-round fishing of the very highest quality for everyone from first timers to seasoned rods.

So, why are The Bahamas just so good for angling?

Basically it’s the ‘perfect storm’ of conditions, geography and topography that combine to create perfect habitats for many of the most desirable sport fish species and make The Bahamas one of the greatest saltwater fisheries in the world.

The Spaniards called the region ‘Baja Mar’, the Shallow Sea, and the huge expanse of shallow sand and mud flats around the islands dwarf those offered by other major angling destinations giving hundreds of acres of prime flats fishing, much of which, particularly to the south, is still largely un-fished!

Heading a little way offshore a series of spectacular reef areas, including the third largest reef system in the world, offer a totally different type of fishing to that on the flats – reef fishing – with the reef structure acting as a magnet for a large number of different species.

In complete contrast to both the flats and the reefs to the west of the Islands the Gulf Stream pushes north and the constant surge of warm water delivers the ultimate combination of nutrients and food to attract the big game species . And where the cobalt blue waters of the Atlantic hits the flats depths of up to 2,000m are found, it’s serious (and seriously good…) fishing!

When it comes to flats fishing The Bahamas is legendary with many of the islands offering miles and miles of sandy flats or ‘marls’ just off the shoreline or amongst the mangroves.

Bonefish are the primary target species for most flats anglers and these ‘grey ghosts’ are challenging to both angler and tackle; tricky to spot, wily, and reaching speeds of 50 km/h (30mph) once hooked – they are serious opponents!

Some of the flats offer huge schools of bonefish eager to take a fly, others a smaller number of larger specimens, with fish over 5kg (10lb) always on the cards so there is something for everyone, from novice to expert.

For the very best bonefishing it is recommended that you head to Andros in the central Bahamas – ‘the bonefishing capital of the world’ – for at least part of your stay.

Andros is comprised of North Andros, Mangrove Cay and South Andros, separated by tidal creeks and cuts and is the country’s largest island, running some 169km in length and 64km wide. Bonefishing hotspots around North Andros include Joulter Cays, while in South Andros Deep and Little Creek are both renowned areas along with the legendary west side and southern tip of the island where many of the prime fishing areas remain little-explored. In addition Congo Town boasts excellent fishing along the eastern shore.

Staying in the central Bahamas the Berry Islands, slightly northeast of Andros, include extensive sandy flats full of ‘bones’; Eleuthera, approximately 97km east of Nassau, has excellent bonefishing on its northern and western shallows and is a great spot for the DIY angler; Exuma, comprising 365 cays, including renowned Staniel Cay, is approximately 225km southeast of Nassau and offers exceptional bonefishing – especially on the west side and between the cays and pristine flats running north through Staniel Cay to Hawksbill Cay.

Bonefishing in the northern islands is productive throughout the year with bones running the Little Bahama Bank. Bimini has a reputation for producing some of the largest fish; Grand Bahama Island provides excellent fishing on fringes to the south side or the more expansive northern flats and the East End Flats are outstanding for bones. The Abacos are the northernmost in the chain and the famed marls to the west of Marsh Harbour all teem with bonefish.

In the southern islands of Mayaguana, Acklinks & Crooked Island and Inagua, locals describe the bonefish as ‘lazing around and dying of old age’ and this area of The Bahamas is ideal for the angler who values solitude and unexplored angling and has plenty of opportunities for the ‘go it alone’ angler who simply wants to do their own thing without guides. There are plenty of virgin flats but known hotspots include the expansive flats on the western side and northern and southern foreshores of Long Island.

In addition to the iconic bonefish many areas, particularly in the northern and southern-most islands, offer the fly angler a good chance of a ‘Grand Slam’  – the taking of a bonefish, permit and tarpon in the same day, an achievement worthy of serious ‘bragging rights’. The Bahamas is also one of the very few places in the world where anglers may have a chance to sight cast to mutton snapper, an all too rare opportunity.

Other common flats species include barracuda, lemon and blacktip sharks, jack crevalle and mangrove snapper, making for both varied and exciting fishing.

With many spectacular reefs, including the third largest barrier reef in the world, there are opportunities for reef, or bottom fishing, on any island of The Bahamas and unlike flats or deep sea fishing it’s perfect for

complete beginners and you are virtually guaranteed to catch fish with a little patience. It’s the ideal opportunity to get the whole family involved or to introduce a non-angling partner to the joys of the sport! Or, if you just want a break from the concentration of fly fishing on the flats or working out with the pelagic deep sea species, it’s a great way to get a bend in a travel rod.

Triggers, snappers, yellow fins, grouper and barracuda are the main species with both bait and lure fishing successful – but don’t think it’s all about small fish, there are serious specimens to be caught – and opportunities to put a fish or two on the grill too!

Bimini, in the northern Bahamas some 80km off Miami, was beloved by Hemingway and slap-bang the middle of the Gulf Stream it is recognised as ‘the big game fishing capital of the world’ but serious blue water fishing is within easy reach of all of the islands.

The cobalt blue waters of the Atlantic with the warm Gulf Stream delivering a constant ‘conveyor belt’ of food acts as a magnet for the oceanic pelagic and predatory species including blue and white marlin, sailfish, tuna, wahoo and mahi mahi.

Some of the most fished areas are Walker’s Cay, Bimini, Chub Cay, Marsh Harbour, Nassau and the Exuma Sound where the ocean sweeps in against the flats and plummets to depths of 2,000m attracting huge numbers of wahoo, tuna, barracuda, sailfish and more.  U.S. Naval buoys off the eastern shore of Andros act as fish magnets too with mahi mahi and tuna particularly noted in the area.

Big game fishing is largely by trolling but there are plenty of opportunities for fly fishing too and the experienced charter boat skippers will put you on the fish if you want to chance your arm with some blue water fly action!

The Islands of The Bahamas offer plenty of angling opportunities for anglers who want to ‘do it themselves’ or fish on a budget and it is perfectly possible to enjoy some of the very best wading flats fishing in the world on a go it alone basis, particularly on the southern islands.

To get the best from the fishing it does, however, make sense to take advantage of the local guides, who have a hands-on knowledge of the local waters and who are usually able to put you on plenty of fish, both on the flats and over the reefs. Guides are available locally and via the fishing lodges, hotels and resorts who cater not just for every need of the angler but for non-fishing guests too! For the big game and deep water experience the charter skippers and their crews are internationally renowned for their expertise.

The Islands of The Bahamas benefits not only from a diverse range of islands to fish but also a variety of accommodation to suit from specialist angling lodges, chic island resorts, international brand hotels right through to smaller and more intimate value-for-money guest houses. So, whatever you want to fish for, however you want to fish, no matter whether it’s an angling only holiday or fishing as part of a family break there will be accommodation to suit, and at all budgets.

Conservation and supporting catch and release and sustainable fishing is paramount to most anglers and the Islands of the Bahamas are aware of this and are at the forefront of angling conservation, ensuring the fish and their unique habitats are fully protected and that guides and local communities are informed and educated to ensure best practise.

As we have seen the climate of The Bahamas is such that whatever the time of year there is exceptional fishing to be enjoyed. However, if you wish to target a particular species or time your visit to make the most of fishing for several different species then take a look at our fishing timetable and plan your visit accordingly. Or of course you can always target one species this time out and then return to target another the next time out because when the fishing is as good as it is in The Bahamas you can never really get enough!

The Islands of The Bahamas – Fishing Timetable for the Main Species:

The Islands of The Bahamas host many angling tournaments and events, some open to all, others by invitation only. Serious fishing and serious partying are said to be the order of the day at many of the events!

The calendar of events features several noted billfish tournaments including the Hemingway Championships out of Bimini, and the world’s oldest series, The Bahamas Billfish Championship Series. Other events out of Green Turtle Cay, Treasure Cay, Marsh Harbour, and George Town attract anglers from all over the world throughout the summer and, earlier in the year, The Bahamas Wahoo Championship Series is held at locations throughout the islands, timed to coincide with the main run of the species.