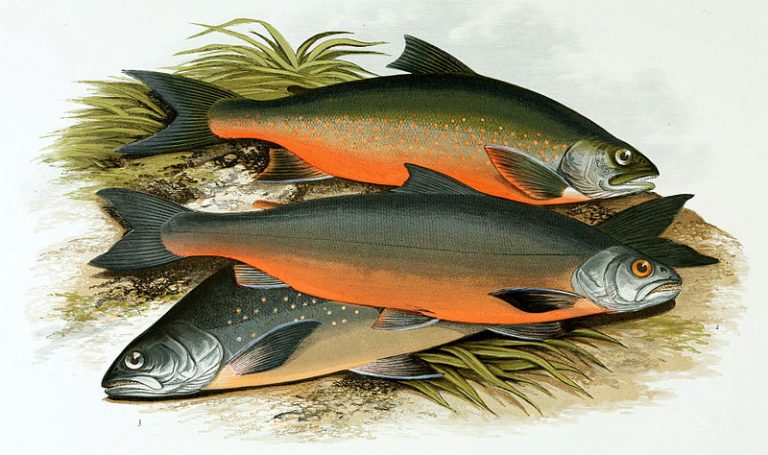 I really need help here, and anybody out there who can give me pointers will be a friend for life. The situation is this. I need to research any possible lochs that might offer themselves as a venue for a film on char fishing this coming year – Covid willing. There are various essentials that I would like to look at later, but first I’d like to look at char then and now. By that I mean the char scene when I knew it thirty years back, and the situation today.

What knowledge of arctic char in Scotland I have dates between 1985 and 1999, or thereabouts. During those years I was primarily pursuing large, predatorial brown trout, the fearsome ferox, and char at first came along as a by-product, as it were. Before long, however, they were to become a fascinating species in their own right. In large part this was because my time up in Scotland – where I often spent five months a year after leaving teaching – coincided with the first time salmon farming was having a major impact. Salmon farming began in the 1970s in Scotland, but built up through the Eighties and exploded in the Nineties. And we all know the fabled results.

Perhaps I should take Loch Arkaig, North of Fort William, as the best chapter of my char fishing story. During the period described, certainly from 1988, I spent huge amounts of time fishing for ferox around the fish cages at the bottom end of the loch. Trolling lures was the original method, but trailing small escaped salmon smolts, questionable I know, became the real game changer. The first ferox to fall to this method was a fine 12.12 pound fish, but soon “super” char were making their appearance. Before the cages, the Scottish record char stood at around two pounds: from the late Eighties I was regularly catching 4, 5, and even 6 and 7 pound char from Arkaig. I believe a “9” was even taken at the height of the glut. Arkaig was not the only loch where char sizes exploded – providing fish cages were present. The correlation was an obvious one. The excess salmon food was falling through the cage bottoms, providing both trout and char with previously unknown amounts of high-protein food. Not since Scottish char had been cut off from the sea by the retreat of the ice cap had they known such a bounty.

I was even catching monster char the “right” way. Where rivers entered salmon-farmed lochs, big char could be found in the late autumn and caught on Mepps, Flying Cs and large, reservoir lures. Whisky flies, Baby Dolls and the like, they all caught me char at these times, often up to five and more pound in weight. It was fabulous fishing and wildly exciting. In the clear water, these colossal char could be seen darting in after the fly and the battles were mind-bendingly ferocious. I began to become so char-obsessed that I began to hunt them out even above the ferox themselves, and also to fish for them on “natural” lochs where I could catch them on wet flies to a pound or so.

Through the earlier years of this century, however, I began to find even more exotic char fishing in Greenland, and my Scottish escapades sadly drew slowly to a close. This explains, I hope, how it is that my knowledge is woefully out of date, and why I need your help. I have been told on what I believe to be good authority that the salmon farming operations have changed rapidly since I was plying my “craft”. Today, labour is expensive and pellets are hugely expensive, and the result is that technology has largely taken over. Cages are now fed remotely and the whole job is computerised, so that next to no food is wasted and falls into open water. The days when a few lads would sail over to the cages and throw in buckets of food willy-nilly are long gone, and char weights have settled back accordingly. Moreover, finding char shoals now is needle-in-a-haystack stuff now that the cages do not provide a magnet.

So, this is my problem. I’d love to take a camera crew to the magnificent North West Highlands, for reasons some might guess at! However, the char landscape has changed, and my fear is that my old stamping grounds are now barren. So, is there anywhere anyone knows where char of any size can be regarded as a realistic target? One fish would be quite enough, and size is largely immaterial. Fly or spinner or both, I am easy. It goes without saying, I guess, that the venue would be spectacular. Arctic char just don’t do grubby, do they? Boat fishing is fine, but access from the bank would be even better.

If there is anyone out there who would like to be a part of this quest, please, please, get in touch with me. My Scottish char days are amongst the happiest of my life’s memories. I would love to play my part in showing anglers how stunning the Scottish lochs are, and just what an extraordinary species the char actually is. This is a largely forgotten chapter in our angling heritage, and how wonderful it would be to bring it back into the light. How I would love to hear from you.

Start typing to see results or hit ESC to close
salmon fly fishing chub roach pike
See all results
More Stories
Usan – No Salmon Netting on Ythan
This website uses cookies to improve your experience. We'll assume you're ok with this, but you can opt-out if you wish.Accept Reject Read More
Cookies Policy