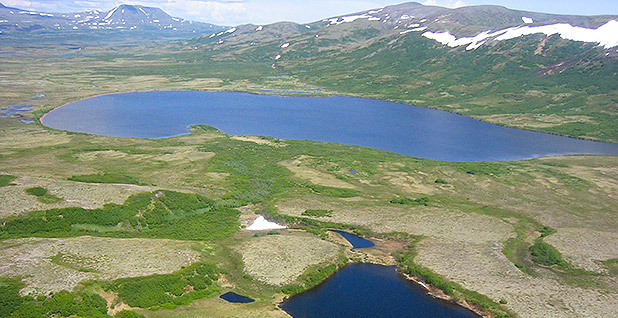 The area near the proposed site of the Pebble project in southwestern Alaska. Photo by Earthworks, courtesy of Flickr.
Editor

The company behind the Pebble mine project in Alaska and U.S. EPA yesterday told a federal judge they are just one week away from settling long-running litigation over Obama-era proposed mining restrictions.

“The parties have identified a likely framework for settlement and request a short, one-week extension of the current stay to allow the parties the time necessary to finalize the agreement and obtain the required approvals,” it states.

“On that basis, we anticipate achieving a resolution to these matters next week,” Collier said.

With opposition already bracing for lifting the restrictions, one of the mine’s top critics lost her job leading an Alaska Native group this week because she took a position on a new Pebble advisory committee.

The board of directors for Nunataq Aulukestai, a nonprofit collective of tribal officials from around Bristol Bay, removed longtime Executive Director Kimberly Williams after she notified them she would soon be stepping down to join the committee.

The group accused Pebble of buying off Williams with a stipend, travel compensation and other benefits, but Williams told local radio station KDLG that her opinion was unchanged against the mine.

Pebble declined to confirm the existence of any advisory committee, but spokesman Mike Heatwole told the Alaska Dispatch News that announcements on several initiatives will be coming soon.

Natural Resources Defense Council Western Director Joel Reynolds told the Dispatch News he, too, was offered a spot on the committee but refused because the plan is “uniquely reckless.”

Start typing to see results or hit ESC to close
salmon fly fishing grayling conservation brown trout
See all results
More Stories
Tagging Advances Knowledge of Bonefish, Permit and Tarpon
This website uses cookies to improve your experience. We'll assume you're ok with this, but you can opt-out if you wish.Accept Reject Read More
Cookies Policy