This week it is all about looking forward to September, and this year that means all about getting some heavy rains to bring up the water flows.

Grand Cascapedia – To August 24, Darlene Sexton reported that “38 fish cooperated with anglers this week bringing our total for August to 246. With a few camps not reporting in time for this overview, those unreported fish should bring numbers up somewhat and we should be able to reach 300 fish for the month.”  With a flow of 24 cubic meters/second on the 29th following good rain that traversed the Gaspé Peninsula, angling success should improve.

Bonaventure – For the season to August 28, 918 fish had been landed (653 salmon released and 265 grilse retained).  With low water conditions, most of the fish are holding in the recesses of deep cold water pools, making it challenging to get a rise.

Matapedia – To August 28, for the season that started on June 1, the CGRMP is reporting that 748 fish have been landed.  Of these, 693 salmon and grilse were retained in addition to 55 reported releases.  Good angling has come in short spurts after the too infrequent rain this season.

Mitis – To August 27, 918 fish had entered the river, 560 salmon and 358 grilse.  For the season, the Mitis Zec is reporting that 255 fish have been landed (123 salmon and 132 grilse) which include 16 reported releases.  Anybody notice the reversal of numbers from last week…  The author was all thumbs when reporting Mitis numbers last week.

Listening to Rene Aucoin on the Cheticamp River, a river he is passionate about, one hears the story of a long, dry summer, when up to 70 or more salmon checked out the river in late June, and just faded back into the ocean vastness. But the Cheticamp River had some rain last week, and it rained heavily night before last, resulting in some Atlantic salmon have been spotted in the river.

Like other places, the temperatures are dropping a bit, but it has continued to be a hot summer. The Cheticamp River remains CLOSED for Atlantic salmon angling, but many anglers are hoping there will be something of a salmon season possible in September.

Margaree – Some of the same rain made it over the mountain into the NW Margaree River but much more is needed. It will be interesting to see what September will bring for both rains and runs.

Miramichi – It is still hot and dry, but there was a little bump of rain at the same time as the Cape Breton rivers saw it, the nights are cooler, taking the edge off the heat, with the beginnings of rain forecasts starting next Wednesday. The rain should be coming. There also could be some fallout due to the destabilizing effect of the latest hurricane.

The conservation limits banning angling on the 15 pools and stretches of river remain in force on the Miramichi.

Jacquet River – A few Atlantic salmon are moving into the system, with 7 grilse and one large salmon this week. But as the graph shows, our expectations were raised after last year’s tremendous returns, and met with a difficult year in 2012.

There was a significant rain night before last (Monday night), and more rain may be on the way be middle of next week.

A little more rain sends the salmon upstream, or so it appears. Don Ivany notes that in many rivers anglers are seeing only modest success as the Atlantic salmon are more interested in travelling upstream whenever a rain event happens.

Humber – Apparently there have been quite a number of happy salmon anglers in the Humber River headwaters recently.

The Main River is a good example of one of the Newfoundland rivers starting to experience greater flows in the past week.

ALL REPORTS COURTESY OF THE ATLANTIC SALMON FEDERATION. 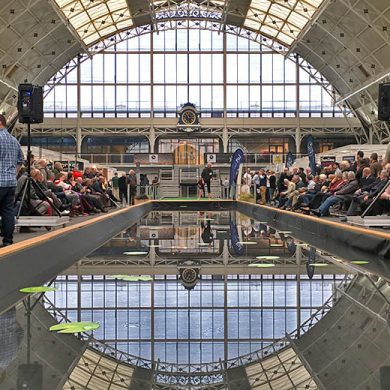 London Warmly Welcomes Its First Fly Fishing Fair
This website uses cookies to improve your experience. We'll assume you're ok with this, but you can opt-out if you wish.Accept Reject Read More
Cookies Policy