It does not take much to persuade me to visit one of my all-time favourite local fisheries less than an hour away from where I live just below the South Downs in Sussex, so when I had to go to Arundel recently I siezed the opportunity.

I can’t say I have been a regular to Chalk Springs over the years but I have fished it enough times over the past couple of decades or so to know I like this pretty little fishery nestled in a small wooded valley to the west of the main town of Arundel. It’s appeal to me largely comes from both the surroundings which are very mature and full of birds and other wildlife but also the fact the lakes are filled by crystal clear water which for Sussex with all its Wealden clay and usually muddy waters therefore is quite a rarity. Because of its clear waters, it is known as a stalking water with some extremely handsome brown and rainbow trout grown on site to double figures, but there are also plenty of good sized and very healthy stock fish to fish for and so it remains a venue for everyone from beginners upwards.

Current owner Darren Smith took over the fishery a couple of years ago and the venue continues to be very popular both with a regular clientele and is also often booked for corporate and club events with a good sized fisherman’s lodge on site and outside tables next to the lakes where you can break for a cuppa and a sandwich when you feel the need. The fishery is approached down a small lane off of a roundabout on the edge of the town. The ticket office, fish cleaning room and toilet are housed at the entry point and once you have your ticket you walk down the valley to the lakes alongside the stock ponds which tempt with their hungry inhabitants always milling around. Darren took me for a tour of the ponds and of course we couldn’t help but stop and stare at the giants he has waiting for their turn to be the heart-stoppers in the 4 lakes that make up the fishery. One change Darren has made he told me is in increasing the percentage of browns he stocks increasing Chalk Springs appeal to many anglers. They are stunners too with large dark spots in abundance.

The fishery website lists the days when it is full booked out for events and although you can turn up on the day and buy a ticket, numbers are limited on the 5 acres of water so it is best to call first just to be sure they have room for you or risk disappointment, particularly during the summer months.

There were just a few other anglers on the afternoon I visited including a son outfishing his dad quite handsomely it seemed, but that left plenty of space to roam and explore which is just how I like it. A modern six weight outfit works well for this size of water and there is little need for super long casts typically, although there are a couple of spots where a far bank cast under the trees can pay dividends. A floating line is the normal approach with a long leader to allow your fly to get down into the deeper holes when necessary and a flurocarbon tippet can be useful in the clear water to increase the odds of avoiding detection. Popular patterns are damselfly nymphs (there are plenty of naturals thanks to the reedy margins), pheasant tail and hares ear nymphs, and it helps to have both weighted and normal versions depending on where the fish are hanging in the water column. Stalking bugs are of course also in evidence but don’t neglect the potential for some great dry fly action too. With good weed growth and the surrounding bankside vegetation sedges, daddy long legs and olives are all worth having ready.

Being spring water fed the lakes also remain pretty much ice free in winter making for a great all year round fishery and with the triploid stock you can fish for browns now all year also.

But for me it is late spring when the fishery is truly at its best thanks to the surroundings and wildlife. Moorhen chicks and cygnets graced the water, young rabbits munched at the verdant pathside vegetation and a carpet of pink orchids created a splash of colour in one area between two of the lakes, not to mention all the fresh leaves out on the trees. If you choose to chase the larger specimens as I often do (notice I didn’t say catch!) then early or late in the day can often provide a better chance of success when there is less activity concentrated on them. The other alternative is to stalk quietly around the lakes of course at any time, seeking out the shady spots under trees – practice your bow and arrow casting technique where you have your fly on a short line and grasp the bend of the hook (i.e. keeping the point end away from your fingers). Point the rod in the rough direction you want to send the fly and pull back on the rod to arch it like a bow and then release the fly. It takes some practice but is great in tight spaces under trees and through holes in bushes where a cast is otherwise out of the question. Check out the deeper holes also and take time to just stand quietly and watch, using any cover available to break up your outline. Dark shadows often appear from nowhere it seems and often follow a routine of sorts around their patch giving you a chance to set an ambush. It can be both incredibly exciting yet completely frustrating fishing at the same time as flies are ignored time and time again.

One such spot under trees occurs at the very far end of the East lake and it often holds a nice fish or two as it did on my visit. I spent an hour or so trying many various flies with the bow and arrow cast from under the tree but they had apparently seen them all. Changing my approach I decided to move around to the opposite bank and put on a bead head hares ear nymph – that worked! First cast just under the outer reaches of the overhanging tree and a nice brown trout of 3 1/2lb decided it was mealtime and led me a merry dance for a minute or two before I could slide it into the net. The perfect end to a lovely afternoons fishing. Thanks Chalk Springs – I’ll be back! 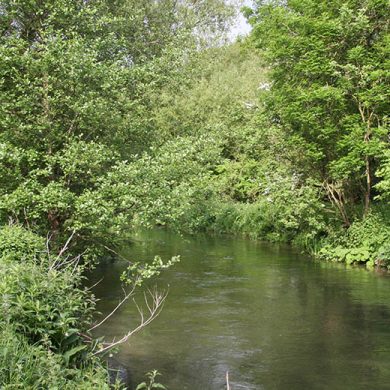