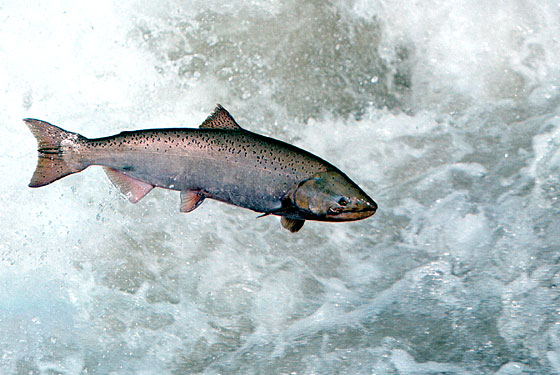 A summit was held last week at the Department for Environment, Fisheries and Rural Affairs (Defra) to discuss how to address failing stocks of Atlantic salmon in England after 2014s catches were the lowest on record, prompting Trout & Salmon magazine to launch a ‘Save Our Salmon’ campaign which the Angling Trust & Fish Legal were voted by readers to lead.

The summit, which was attended by senior government officials including the Chairman and Acting Chief Executive of the Environment Agency and the Fisheries Minister George Eustice, heard about the many pressures on salmon and a number of immediate actions were proposed before the meeting in a joint paper from the Angling Trust & Fish Legal, the Atlantic Salmon Trust, Salmon and Trout Conservation UK and The Rivers Trust.

In a speech at the summit, the Angling Trust called for an end to all netting of salmon and the designation of salmon and sea trout as sport fish, to recognise the far greater social and economic benefits of catching these fish on rod and line than in nets. The Trust also demanded that the Fish Passage and Screening Regulations should be introduced urgently, after more than five years of working their way through Whitehall.

It also called for firm but fair regulation of agricultural pollution, which has been identified by the Environment Agency as the principal cause of poor salmon populations in English rivers, and for abstraction reform which has still not been brought forward to parliament.

The Trust noted that most of the actions required to save salmon were not in the gift of the Environment Agency’s fisheries department, which has been subject to repeated cuts in funding from government, but required action by other parts of the Agency and across government departments.

The Environment Agency announced that it would be launching a 5-point plan for restoring salmon stocks in the new year which would include actions to:

Defra also announced during the day that in light of the long-term decline in salmon stocks, Defra and the EA are considering a ban on the killing of wild salmon by nets and rods unless the rivers or estuaries can demonstrate the fishery is sustainable.

The changes being explored (which will be consulted upon in 2016) include:

•    The suspension of commercial net fisheries;

•    Mandatory catch and release of salmon for recreational anglers on some rivers;

•    Rules on angling methods to reduce the accidental killing of rod and line caught salmon.

The Angling Trust is concerned about widespread introduction of mandatory catch and release for anglers, particularly given the lack of confidence in the current stock assessment methodology on individual rivers. Imposition of catch and release may lead to the alienation of some anglers which will cause a further decline in rod licence income and the many donations of time and money to the work of organisations like the Rivers Trusts, which are vital to the future restoration of our rivers.

“We welcome the Environment Agency’s initiative in organising this summit, the headlines around tackling long-standing issues with the water environment and the plans for a suspension of all commercial net fisheries. However, we will need to see evidence of action being taken and results being delivered before believing that this is anything other than warm words.

Salmon Action Plans were published ten years ago, but have largely sat on shelves gathering dust. Anglers already release more than 75% of the fish we catch and we are not responsible for the decline in fish stocks, which has been caused by decades of government failing to protect both the freshwater and marine environment. Hopefully, this summit will prove a turning point for the fortunes of these magnificent fish.”