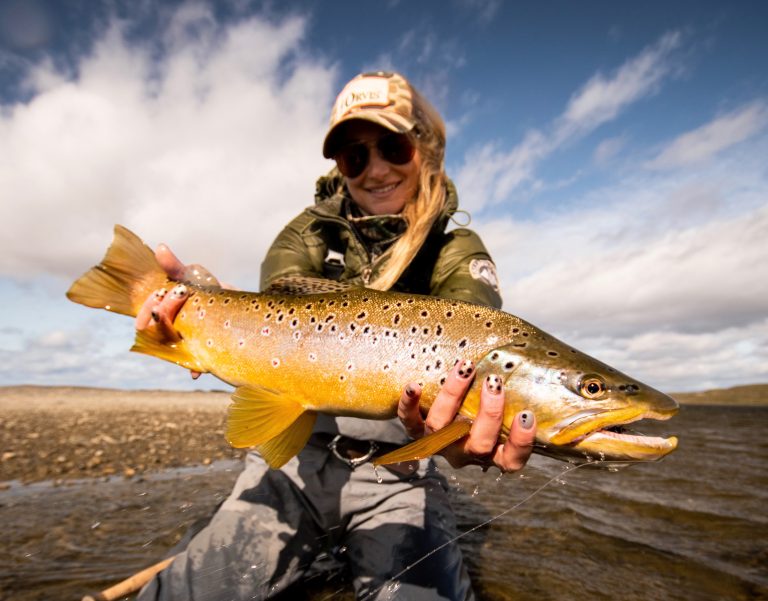 We all think we know Marina Gibson from her TV appearances, her social media presence and her written words, but here we try to get to the real person, the true fly fisher who has burst on the scene so dramatically these past three years. 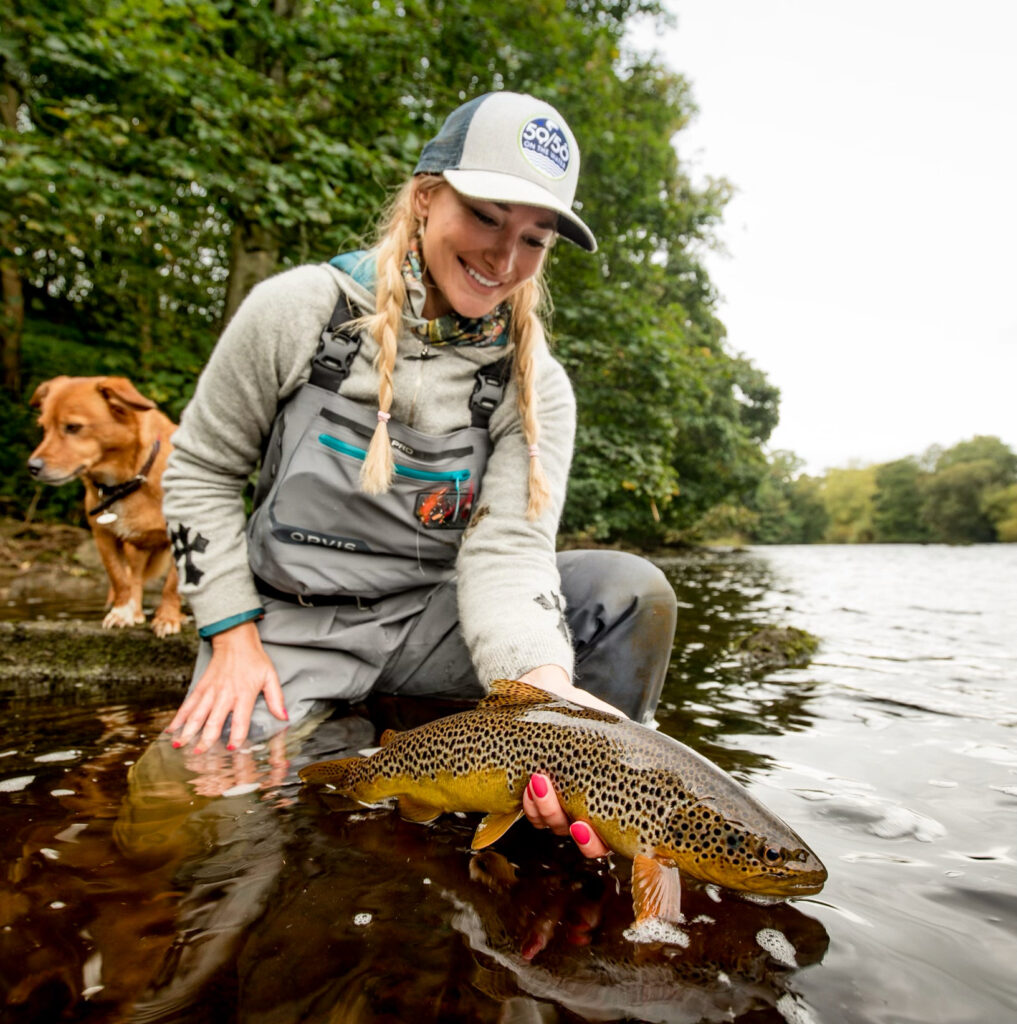 We increasingly lose our knowledge of history, so it’s worth reminding ourselves that women in the game world especially are not a new phenomenon. Georgina Ballantine (64 pound salmon, 1922), Doreen Davey (59.5 pound salmon, 1924), and Barbara Williams (two Wye salmon for 86 pounds, 1930) are examples of piscatorial excellence a century ago. More recently, women like Anne Voss Bark, Grace Oglesby, Shirley Deterding (at least two 50 pound salmon to her name) and Frances Shane Kydd have always been talked about in the same terms as male anglers. And of course, even more recently, Rebecca Thorpe and Lucy Bowden have brought feminine grace to the fly fishing world, so Marina is following in a long-standing tradition.

The fact remains that there are not as many women fishers as men, nor as many women fishers as there should be. We cannot get away from the fact that the angling world is male-dominated, and that at most gatherings there will be more men than women present, and often men quite happy to tell everyone just how much they know. I have worked around the tackle trade for quarter of a century, and I think the women I have known in it would agree they have faced sexism regularly, albeit much of it unconscious perhaps. This is not new in any way: decades ago Bill McEwan wrote in Angling On Lomond “In 1927 womens’ lib took hold and so did a 36 pound salmon on the line of Mrs Leckie Ewing”. Not sexism per se perhaps, but certainly the type of patronising attitude that women in all sports have faced their lives through. Many years ago, BBC2 aired a programme hosted by Annie Mack that questioned why fly fishing was not as popular amongst women as it should be. The answer? Not enough toilets. A major issue in angling, handily dismissed in a condescending manner, and I am sad to admit that I took part in the programme, so there is no holier-than-thou from me in all this! 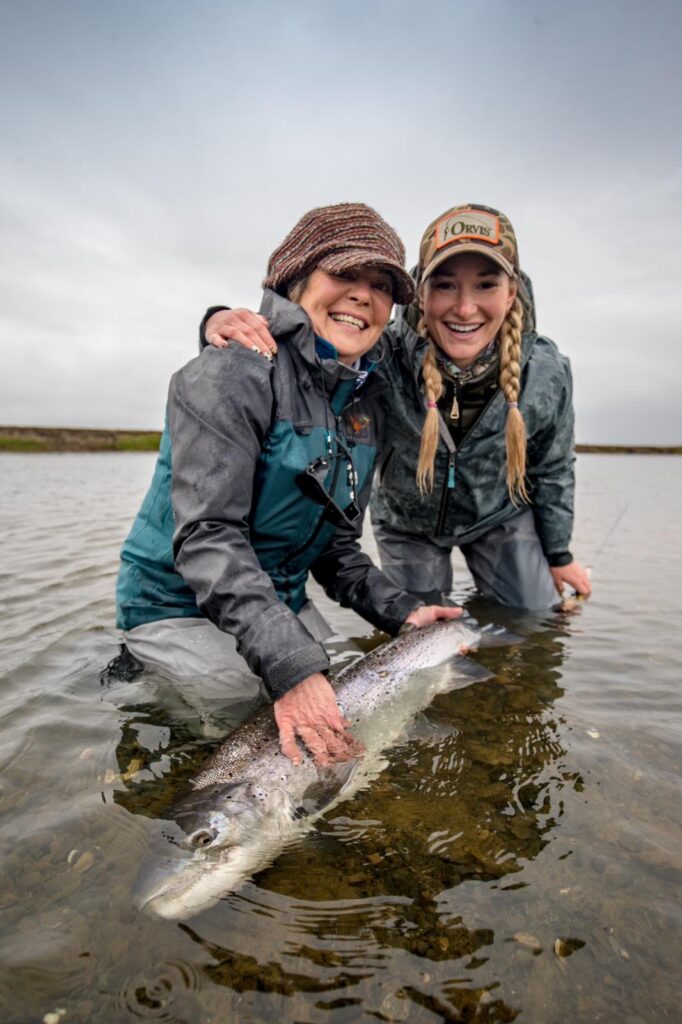 When I asked Marina the same question, she mentioned that perhaps danger keeps girls especially from the waterside when they are young. I think most of us would agree that the best anglers start in childhood, so Marina might be correct here, and certainly you don’t see gangs of young girls off with their rods to explore the sport. Marina was talking more about the fear of unhooking a fish, but I still bear the marks of a couple of airgun pellets to remind me that the canal banks of my youth had a dark side. There are two facts here: one is that there are more male anglers than female, but that female anglers can be absolutely as passionate about the sport as men, if not more so. In the world of UK angling, women, especially young glamorous women, tend to be unusual, often disregarded and perhaps somewhat isolated.

Marina hinted that the internet doesn’t always break these problems down and can actually exacerbate them. She was very positive about feeling that, as a young woman, she has to work harder than a man to prove her worth. She was not whinging I emphasise, just stating how she feels, and what I guess many of us would accept as facts? This is one of the many exhilarating things about Marina: her positivity and her exuberance in what she does are boundless. She is also a very, very good fly angler indeed. I have said that the best anglers start in childhood and Marina began at the age of five, in an fishing-mad family. She is quick to give credit to her father in those early years, but it was from the age of eleven that her mother, the equally talented Joanna, became her guiding star. Together they forged a scintillating mother/daughter partnership that has set Marina on this life path. When I asked Marina what her favourite species of fish might be, she replied salmon. Fitting because that would be Joanna’s choice too, but also because Marina so reveres the struggle that salmon undertake to achieve their life purpose, a struggle that she identifies with herself.

The regard with which Marina is now held in the angling world has not fallen into her lap. For years she worked in the City for a commercial property company… and hated every minute of it. She had her exit plan, however, and began to take every angling exam and qualification that was on offer. Marina is not one to do anything by half measures, and shortly after the chaos of Brexit, she reckoned she had enough letters after her name to give the angling guiding world a go. Fishing for a living was a plunge for her that I can understand, one that I made thirty years ago when I left teaching. Giving up a salary is not easy, and she gave herself three years to make the change work for her. It was a crazy journey, but in her words she now “feels free, knowing what I want to do with the confidence of knowing I can do it.” 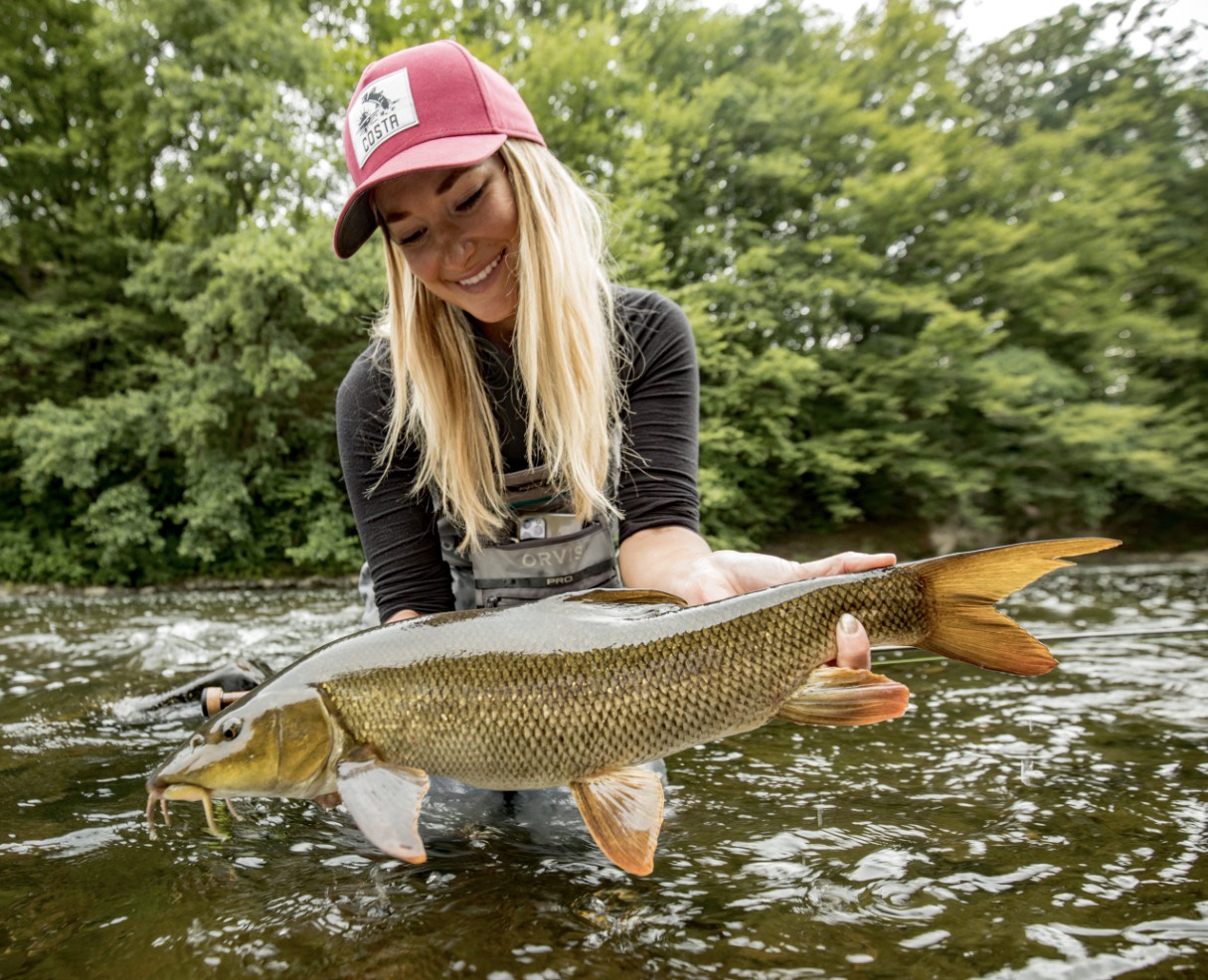 I asked Marina about angling heroes and her answer was immediate, Joan Wulff. Who else but the American angling darling, who has dominated the fly casting world for over half a century? Steve Rajeff has said of Joan “She’s fantastic. Her records have inspired this generation of women anglers”. Celebrity guide Lori Ann Murphy was even more eloquent when she wrote “Joan is grace, beauty and intelligence all in motion”. This is pretty much how I see Marina, and TV angler (amongst many other things) Paul Whitehouse would say after a recent filming session with her. “Bloody hell, John, I thought I could cast, but this girl is the real business. She was putting flies where I’d never dare to think of going mate. She’s pure genius. I just wanted to slink off the river and hide.” 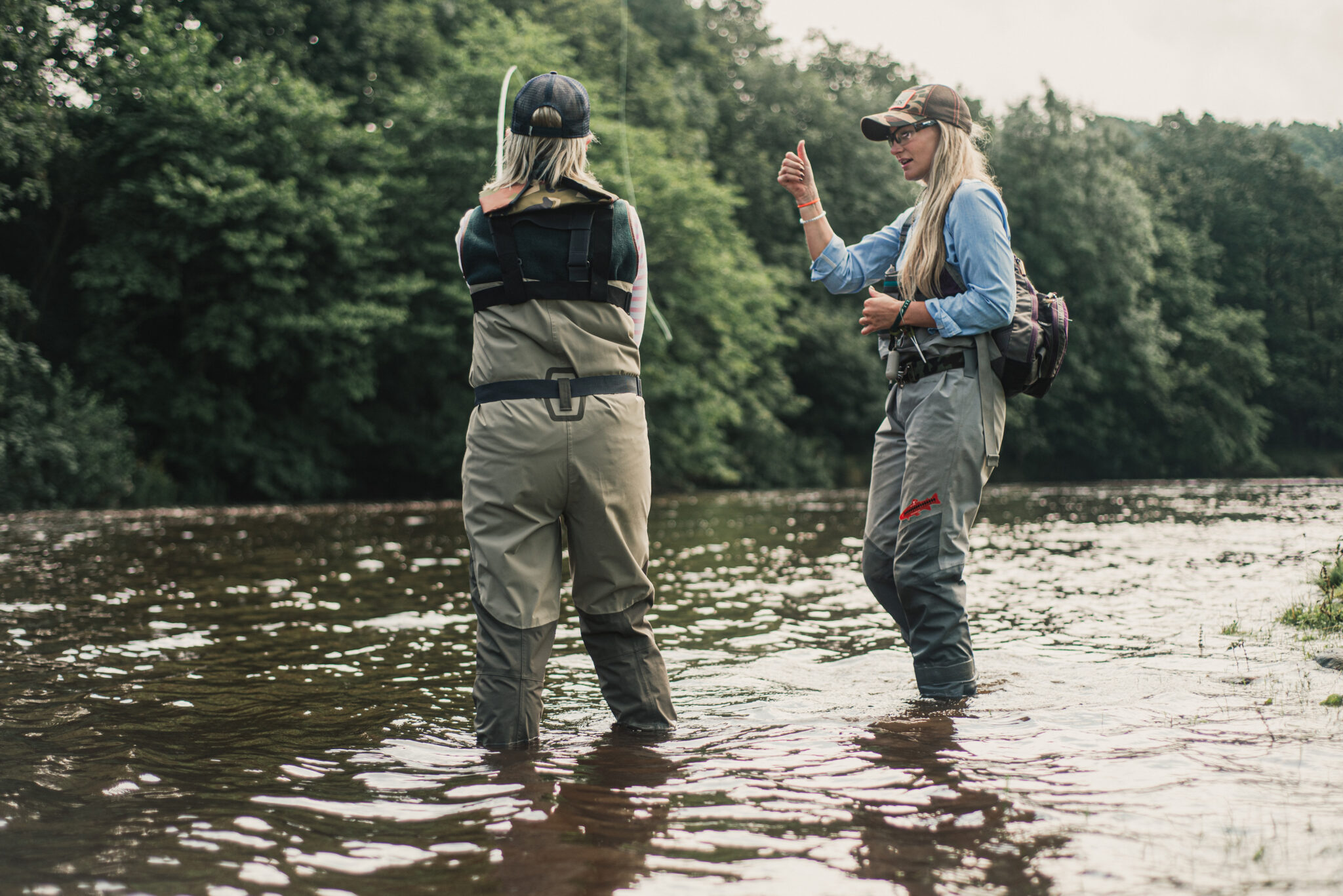 What Paul recognised are the results of hard work allied to real talent. When Marina started guiding she says “I just took myself off and determined to get my casting right. My exams and my practice took me to a different level, as I began to understand the dynamics of the cast and how little things can mean such big improvements. It was a fascinating journey for me, and I’m learning all the time, and know I’ll never have all the answers. I admit when I am stuck, when I need help, and that all adds to the fishing story of my life.” 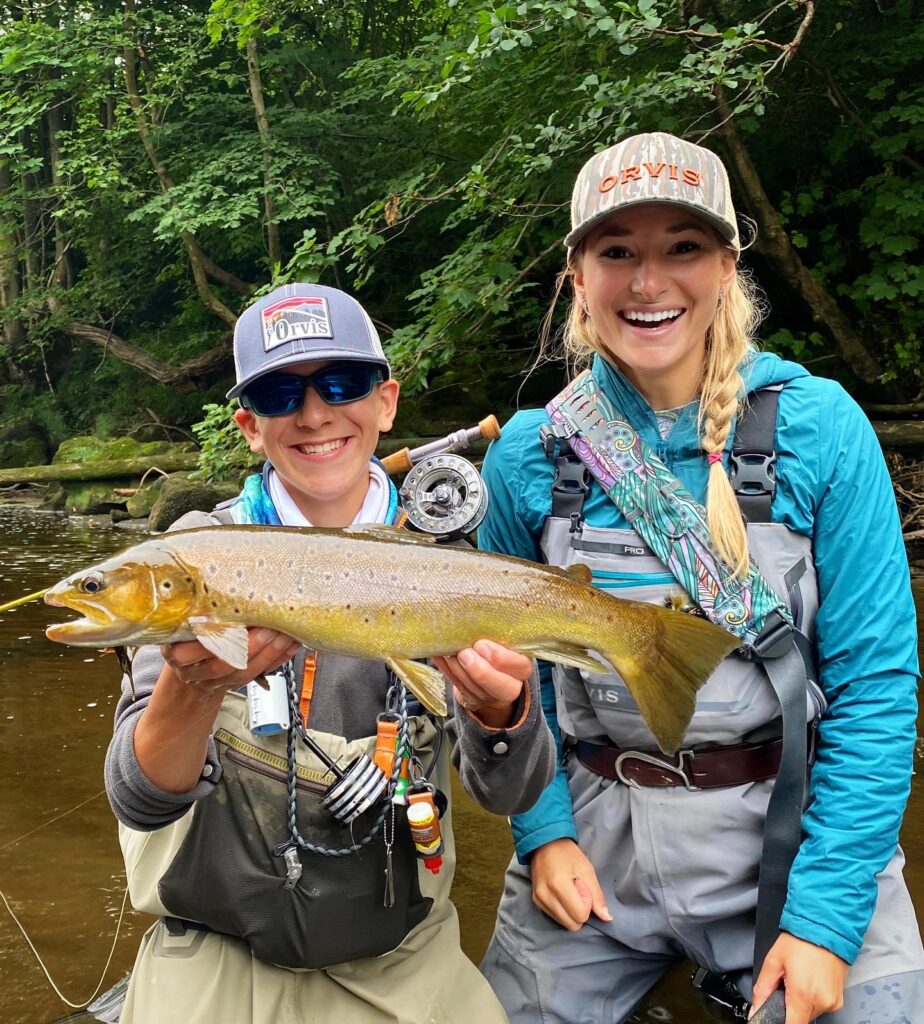 If all this sounds too good to be true, Marina is down-to-earth about the tough side of guiding. She’s very rightly frustrated that anglers are very happy to pay what it takes to get a plumber round, but quibble about paying a guide for providing them with the best days of their lives! She knows what it is to be exhausted, mentally, physically and emotionally, after a day of giving every bit of her angling self. To be a guide is not to be a ghillie, and you are doing exactly what it says on the tin, providing every element of angling a client asks for. Go to the Northern Fishing School website, book Marina for the day, and you’ll see her anxiety that everything goes right and that feeling of being responsible for conjuring the perfect day. Again, though, no complaints. “Fishing is my life and the fun I have is endless. As is the exhilaration I feel when I help my companion to a dream fish. We are in the challenge together and success comes to be a drug. I can’t even begin to compare my life now with the one I endured back in London.”

I know guiding is draining, but Marina does not make her life easier. She is an ambassador for Orvis, the Atlantic Salmon Trust, and Fishing For Schools. She plays active roles at the Angling Trust, at Anglers Against Pollution, and at River Action UK. She helped devise Casting In The Park, a scheme to give free casting lessons in a morning, or even a lunchtime. And her latest brainchild is the Cancer and Pisces Club, inspired by the book Cancer and Pisces, written by Mick May. Marina and Mick are working together on this, using the well-documented therapy of fishing to give hope and comfort to those suffering the disease. Not one of these involvements is a jot less than wholehearted and sincere. Even though we might be living in the world of the Greta Thunberg generation, this level of dedication is extraordinary. What drives Marina to use every second of every day to help people and the environment, in the most important and fundamental of ways, is beyond me and probably most of us. But this is what she does with her life.

The last thing I want this insight to do is to come across as some sort of doe-eyed eulogy, because Marina herself would despise that. What I want to do is underline that she deserves to succeed at every level, and that she has earned the right to be taken very seriously indeed. There’s no doubt that she’s in for the long haul, and that we will be hearing of her in years to come. In part, this is down to her skills and commitment, but the age we live in is on her side as well. Women in football, rugby and cricket are accepted on equal terms with men, and this acceptance is all but here in angling. Nor has conservation ever been taken more seriously than it is today. Marina is an elegant and articulate mouthpiece for all us of us who believe in the critical necessity of clean rivers and seas. Yes, she’s a great angler, a great woman, and I don’t hesitate to call her the Joan Wulff of our age. 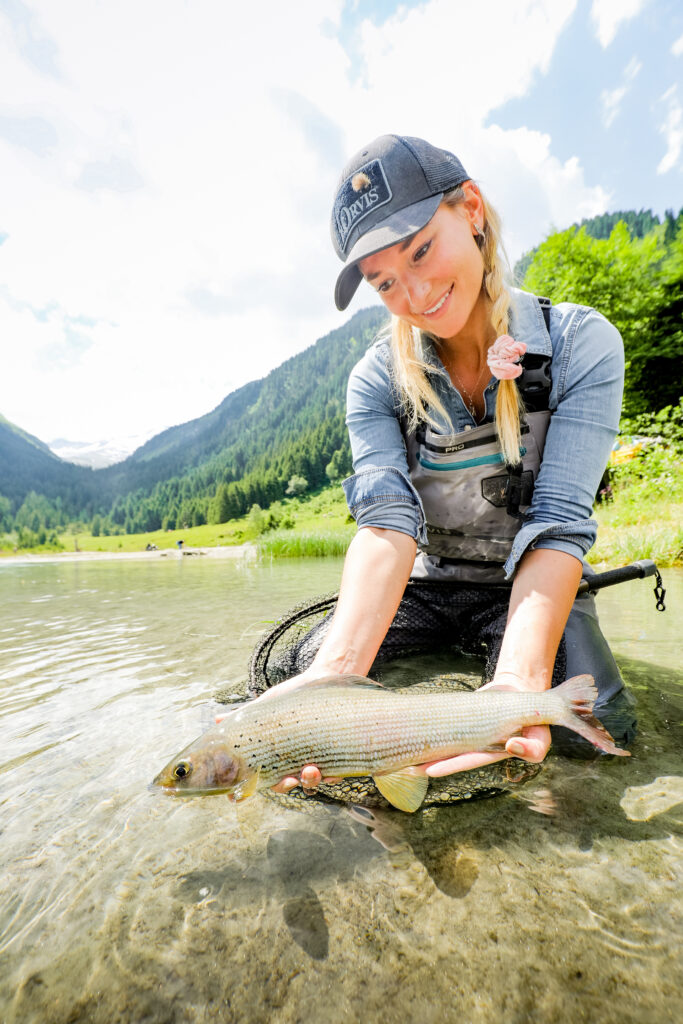 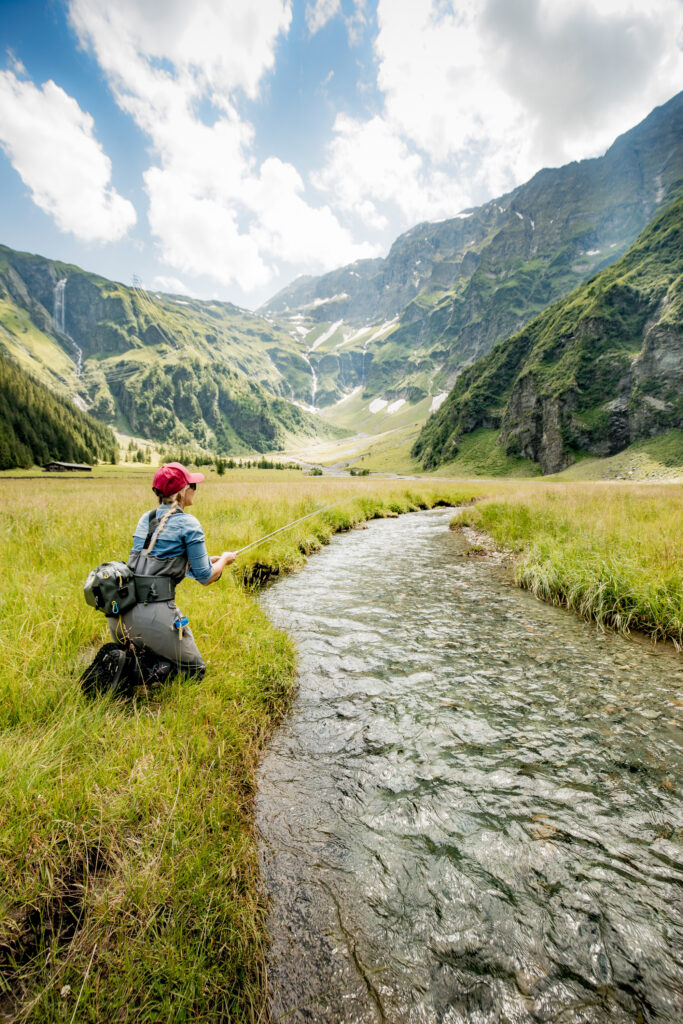 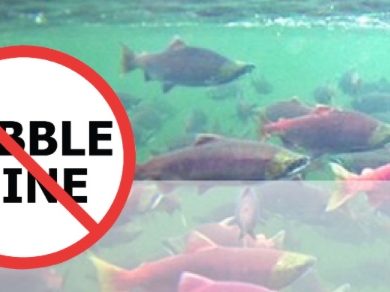