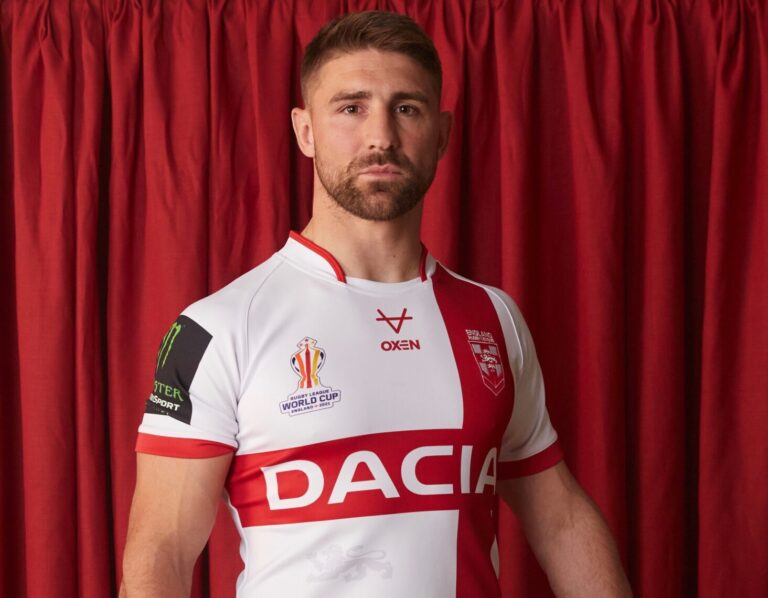 Tommy Makinson is a god. I don’t care if you are into Rugby League or not (and I wasn’t), Google the man and watch the video of his best twenty or so tries. This is five minutes of complete and unbelievable magic. Here is a man who can run like a cheetah, jump like a gazelle, and who has the strength of an ox. He scores tries of superhuman wonder, and all the time opponents who make Chopper Harris look like Andy Pandy are trying to kill him. Since the days of Dennis Law, there are not many athletes who have made me gawp in amazement, but Makinson is the stand-out, the number one. And he loves fishing!Talking to Tommy, you immediately get the man’s passion for everything he does and the intensity of his life. He doesn’t mess about. He trains like a dervish and plays like he’s on fire. He loves his country and he’s proud of his background and family. He adores his daughters, Isla and Aria, and his home is the core of his world. His time is tight, but he makes room for his fishing because it is fundamental to how his well-being flourishes. He’s a man who demands utmost respect. Tommy was born in Wigan, me, I was born in Manchester. I only mention this to show I know the area, and have a feel for that part of the North, even though our birth dates are half a century apart. I last spent time up there twenty years back, ghosting legendary matchman Kevin Ashurst’s biography, and for a couple of weeks relived the toughness life in Lancashire demands. I didn’t watch Kevin actually fish a match, but we travelled to many of the venues, mostly canals and pits, and saw anglers desperate for a gudgeon that might win them a tenner. The book did get written, but was never published: Kevin’s son died of drug abuse, and the angling press wanted to hang all the PR on this tragedy, rather than on the positivity of the great man’s fishing and career. Like Tommy, like many from Greater Manchester, Kevin doesn’t mince his words, and he walked away from the project and the book, which got scrapped.

Once again, I mention something seemingly irrelevant for a reason. In a tough environment, you put your back into life or you get nowhere. You sink or you swim, and the fact that Tommy has hurtled down the pool of life, he’d put down to his upbringing, and even his fishing. His young days were all rugby league and angling, and he was taken by his dad as a constant companion. Dad had been in the RAF and was used to fly fishing in Belize or salmon in Scotland, but that didn’t stop him teaching Tommy love for the local canals that thread that part of the industrial North. The young Tommy was the fireball of energy he has become on the pitch. He says, “I was forever looking for pike on the canals and couldn’t sit still. On rivers like the Ribble or the Wyre I wanted to see round the next bend, explore new water.” But perhaps that’s kids, and I guess you and I weren’t that different?

Then Tommy said something that really did strike a chord. “Of course, it wasn’t just about fishing those weekends, was it? Going with Dad opened my eyes to everything happening around me. I saw I had to leave everything pristine. I’d get a whack if I didn’t but I wanted to, for myself. Fishing with Dad and Grandad too taught me more about discipline than school did. They were mentors and role models, both of them. No litter. Care for the fish. An understanding of how nature works. I was fifteen when I could night fish alone, and then I learned to look after myself, but Dad had done the groundwork those early years in the sport. He’d in truth laid down a whole foundation of life skills, and that’s why I want to see fishing in schools. It introduces kids to a wider world. and gives them a purpose in life that keeps them away from trouble and harm.” When you look at fishing like this, which I believe we should, doesn’t it give what we do a new perspective?Today, Tommy’s fishing has taken on wider horizons. He has had trips to France with mates and caught forty pound carp. He likes to beach cast off the coast at Abersoch in North Wales, and he wants to perfect his fly fishing, preferably on chalk streams down South. Today we are swamped with talk of mental health issues, and Tommy keeps it simple. “Fishing is a way of resetting my life. Playing in front of thousands of people gets to you, whether you play well or not. Being outside is a big part of my life and fishing is more than simple relaxation. It gives me another dimension. That’s one reason I have already taken Isla fishing with me like my Dad did me. I want both my daughters to lead a life they love, both in sport and in the workplace. I’d like them to want to work hard and with discipline, and going fishing as kids can help with that.”It was Tommy who made the point that whilst he and I come from the same geographical background, our outlooks are separated by half a century in time. He is probably correct that my generation took life’s progress for granted, and it is a different, more complicated world out there today. Tommy’s career is about marrying colossal talent with hard work. He believes that a simple life, positively led, can overcome all obstacles and challenges. Enjoying everything you do is central, and fishing, for him and his family, will always be part of the mix. We closed down our Zoom call, and after just an hour I felt I had made a friend. Forget the fame and the adulation that follows Tommy around. Here is a down-to-earth young man who is genuine, principled, and works his socks off for success. I’ve invited him down to fish for barbel with me this coming summer, obviously after the Rugby League World Cup in which Tommy will be taking part. I hope he’ll come, and bring Isla with him. It would be good to help set another generation of Makinsons on the fishing road of life.