Angling in the NT can be broken down into two distinct categories: ‘Barramundi Fishing’ and ‘Blue Water Fishing’ and both offer unique and challenging opportunities to fish for some of the most impressive species on the planet in a mind-blowing range of habitats.

From the open seas and reefs to huge tidal rivers, mangrove-lined estuaries, creeks and freshwater billabongs the Northern Territory has them all!

With the name originating from the Aboriginal word meaning ‘large-scaled river fish’ the Barramundi or ‘Barra’ (Lates calcarifer) is an aggressive, predatory member of the Perch family that enjoys iconic status

Inhabiting coastal waters, estuaries, lagoons, rivers and freshwater billabongs Barramundi migrate from freshwater to coastal estuaries and the mouths of tidal rivers to spawn. They reach lengths well in excess of 1m (3ft) and the current IGFA record is a huge lake specimen of 44.64kg (98lb 6oz) but specimens of 15kg and above are considered to be the ultimate ‘target’ for most anglers.

From October 2015, the ultimate prize is not just the size of your catch in the Northern Territory, you can now enjoy the fishing holiday of a lifetime AND come home AUD 1million richer (approximately £500,000).

Happy to hit a lure or fly (HARD!) or to take various livebaits from fish to crabs, Barra fishing is not for the feint-hearted and their power and acrobatic, head-shaking displays are legendary. Hooking them requires an intimate knowledge of local waterways, a good understanding of conditions and, despite their size and ferocity, a considerable degree of finesse – especially when targeting them on the fly or on artificials. Once hooked the main requirements are for strength, stamina and sound tackle…

Tackle up for Barra!
To kit yourself out properly for ‘Barra’ and to ensure you are properly equipped for one of the most iconic and hard-fighting species in the world visit the Farlows’ Kit Bag HERE

Barra Fishing in the NT
Barra fishing in the NT predominantly takes place in rivers and estuaries, and may involve targeting other species such as Saratoga, Tarpon, Mangrove Jack and Salmon. Fishing tour operators may also head out from the estuaries to fringing reefs to target the blue water species, such as Golden Snapper and Black Jewfish, but the ultimate prize are Barramundi.

The majority of Barra fishing tour operators are based in Darwin, operating tours to rivers and estuaries in surrounding regions of the Mary, Adelaide and Daly rivers. Barra tours can also be found in Nhulunbuy, Kakadu National Park, Dundee Beach and Borroloola.

A number of residential fishing lodges also operate in the NT, including the Tiwi Islands, West and Central Arnhem Land, Mary River Conservation Park and in the Daly River region. Heli-fishing operators can also take anglers to more remote areas that are harder to access by road, adding another dimension to the fishing experience and allowing you to customise your NT fishing adventure to suit your exact requirements.

Blue water fishing in the NT encompasses a great diversity of target species, angling methods and locations and experienced local guides and skippers are able to cater for a range of different requirements.

Reef fishing
Presenting baits on, or near, the bottom in and around reefs, rocky outcrops and the ocean floor. Target species include: Golden Snapper, Black Jewfish, Tricky Snapper, Red Emperor and Coral Trout.

Pelagic fishing
Trolling with lures and lives up in the water or casting a fly to species such as Tuna, Spanish Mackerel, Trevally and Queenfish.

Sport fishing
Jigging and casting soft plastic lures or flies to target a specific species. The techniques require a great deal of finesse, with both reef or pelagic species the targets.

Big Game fishing
Targeting billfish, such as Black Marlin and Sailfish, on specialised boats with trolled lures is the most usual method – although both Sailfish and Marlin on the fly are possible by ‘teasing’ the billfish to the back of the boat by running a hookless lure, and then casting a fly once the fish has come up to hit the teaser – exciting stuff!

All types of angling opportunities are possible in the NT and a variety of different options are available. You can hire your own boat, stay on dry land and simply cast a rod from the nearest jetty, or you can take it further by tailoring your experience with a well-established local angling industry that is geared to getting you that fish of your dreams with highly skilled local guides and skippers.

Bespoke fishing lodges and camps in remote areas offer small vessels that can reach river, estuary or ocean fishing areas that are otherwise hard to access from main cities.

You can join a mother ship – a large vessel that acts as your floating base, and allows you the luxury to then head out and fish from a smaller tender vessel and target a variety of species. With accommodation and meals served on the mother ship these trips can last a week or more at sea, affording the opportunity to reach more remote fishing spots.

Operators of the larger blue water vessels are based in Darwin and offer half, full day and extended (4-5 days or more) fishing trips on vessels that are smaller than mother ships but more comfortable than small boats. They generally carry around ten anglers, with abilities often varying from novice to expert, targeting reef and pelagic species, usually close to Darwin.

Smaller, faster boats based in Darwin, or other accessible coastal communities, offer a mixture of Barramundi and blue water fishing, including reef, pelagic and sport fishing.

NT Fishing Seasons
Fishing is a year-round activity in the NT and you can be sure of exceptional sport whenever you choose to visit but there are four distinct seasons that impact upon conditions, and hence the type of fishing you will experience.

The Wet Season
January to March is characterised by storms and monsoon rains that fill the floodplains, connect the billabongs to the main rivers and generally bring the entire landscape to life.

Blue water reef fishing can be at its best during the ‘wet’, but is very dependent upon the weather. If you get a break in conditions the main target species are Golden Snapper, Black Jewfish, Cod, Coral Trout and Red Emperor.

During the wet season the inland floodplains rise and Barramundi swim upstream to feed and are mostly found in the floodplain channels and waterways, or estuaries around Darwin and Bynoe Harbour. They can take some tracking down at this time of year but find them and they, along with most other species, will be gorging on an explosion of juvenile prawns and small fish.

The Run-Off Season
The end of March through to April sees the rains ease off and the floodplains begin to drain out to the sea, allowing the rivers to regain their shape. This is the run-off season and is generally considered to be THE best time to target Barramundi as they move back to the estuaries and feed by congregating around the mouths of creeks to ambush the small fish and crustaceans being channelled back with the receding water.

Run-Off is also great for blue water fishing as bait fish wash out of rivers and estuaries into the ocean, bringing opportunistic feeders to prey upon them in the rapidly warming waters; it’s also an excellent time for reef and sport fishing with pelagic species such as GT’s and Queenfish and reef species like Golden Snapper and Black Jewfish all great targets close inshore.

The Dry Season
May to September brings clear blue skies and cooling water and although the Barra fishing slows down it’s still possible to target them in coastal mangrove estuaries and inland billabongs, particularly where there is good water clarity.

This, however, is prime time to target the pelagic species such as Tuna, Spanish Mackerel, Cobia, Queenfish and Giant and Golden Trevally. Billfishing is also great at this time of year with great catches possible between Darwin and Dundee Beach and from Nhulunbuy to Groote Eylandt.

The Top End also offers exceptional fly fishing for Giant Herring during the dry season as this predatory sportfish migrates into the shallow inshore waters. Described as somewhat like a cross between a Tarpon and a Bonefish these fish average some 3 – 6kg (6 to 13lb) in weight and will smoke 100m of fly line and backing off a reel in seconds…

The Build-Up
October to December brings heat and humidity in the pre-monsoon build-up; this warms the waterways as isolated showers flush out creeks and rivers, really getting the fish on the move.

October is Barra breeding season and that means the large females and their accompanying smaller, mature males are heading to the river mouths and estuaries to spawn – if you want to catch a HUGE Barra this is the time to do it! Although Barra are one of the finest tasting fish in the world this is also the time to practise catch and release to allow the gravid females to spawn successfully and produce the next generation.

Inland waterways reach their peak during the build-up too as the billabongs warm up and the freshwater Barra become increasingly active. They will hit a fly cast to structure during the day but the sport can be amazing in the evening and into the night as they move into the open water to hunt – surface poppers can bring some incredible strikes!

At sea build-up brings the doldrums – extended periods of flat calm seas and no wind, which is perfect for targeting reef species like Golden Snapper and Black Jewfish which congregate on reefs and shoals close to Darwin and Dundee Beach. Fly fishing is also best at this time of year in the calm, windless conditions. 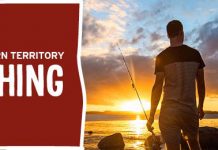 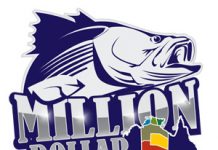 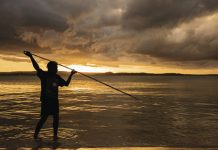