Fishing on the Frontier – Part 14

I wrote before about sensitive take detection and its importance in hard fished waters where we have to present small, imitative nymphs on fine tippets. I gave the general construction of a long (necessary) leader for this, as used by the top European fly fishing teams. I have been experimenting for some time with these and have added certain refinements. To be more precise, I have been fortunate enough to see or use several other anglers’ ideas on this, including those of Luois Otano Perez, of the Spanish First Division of competitive fly fishers.

The Stren coil indicator, married to these long leaders, is a great step towards sensitivity. They are not difficult to make, but they take a bit of patience and practice. Apart from the Stren itself you will need cotton buds, pins and a saucepan of boiling water and a freezer. The Stren referred to is branded under at least one other name – the Italian, Asso line, for example – but is essentially 6lb test (0.20mm) fluorescent yellow/orange nylon monofilament. It was originally designed as a high visibility sea fishing line. I have been experimenting with colourless monofilaments actually, because I dislike using anything fluorescent near wild fish, but more of this in due course.

The basic construction is as follows: Snip off a 30cm length of the monofilament. Tie very small loops in either end using a figure-of-eight knot. Then pin one of these loops to one end of a cotton bud. Wrap the remainder in a coil along the length of the cotton bud and pin the other coil to the other end. This is the form of the coiled indicator and it now needs to be set. Drop the construction into hot water, bring to the boil and allow to stand in boiling water for at least five minutes. Then remove and place in a freezer for several hours, even overnight. This process sets a coiled memory into the monofilament and when you unwrap it from the cotton bud you will see the permanent coil that remains, even after repeated stretching. Bear in mind that if you stretch the coil overmuch, beyond its elastic limit, the curls will be deformed, but in normal fishing use they last adequately for many trips.

The coiled indicator can then be tied into the leader in the appropriate place, between the taper and the tippet (the latter being the most varied in length according to requirements and conditions) via the mini-loops. It is important to grease the coil liberally with thick Mucilin so that it stands up on the water surface. The result is, finally, a fly fisher’s float and it is very sensitive, as it needs to be. I mean, a bait fisherman, employing a float, requires sensitivity, particularly the modern ultra-sensitive pole rigs, and this is for fish taking an actual food form. Think about a trout or grayling, or a coarse fish, picking up an artificial nymph rather than bait. They can eject it in a flash, particularly fish like roach, dace or grayling. We need every chance possible in order to register when a fish has mouthed the fly. The greased, coiled indicator is far more sensitive than the proprietary available strike indicators, though will not support as much weight as these, but then it does not need to do so. We are employing mostly lightly-ballasted, single (occasionally double) nymphs in size 20, 18 and 16, at depths commonly less than a metre. All we need is to be able to support that sufficiently during a drift until a fish takes, when the coil generally stretches, and even dives away, to signal us what is happening.

As I mentioned, this is the basic construction and there are numerous refinements of these sensitive take detection leaders, but if you are new to these, try practicing with them as described in this and the previous article before making your own alterations. Try them on clear water streams where the trout or grayling are wary, and explore the limits of application of these contemporary leaders. Best of all, if you have access to them, dace will lift your game like no other fish. These little river darts take like lightning and present us with a terrific challenge. Begin to have reasonable hook-up success with dace and you will really be in a position to start refining the take detection leaders. Approaching spooky, clear water trout will then come as light relief! 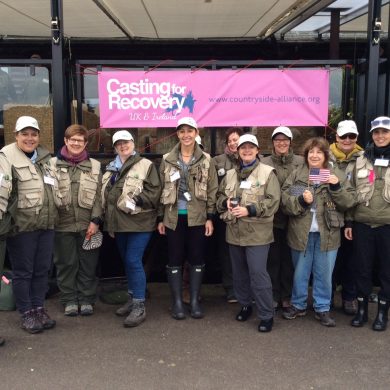