Fishing on the Frontier – Part 17

I promised to write up about the National Final on Bewl this weekend  with specific reference to the method and tactics employed by the successful qualifiers. You have to appreciate the conditions: the day of the final was utterly breathless and cloudless, throughout the day, an absolute mirror calm. Also, the fishing leading up to the final was challenging, each day becoming progressively more difficult. For practice I fished on Friday, with fellow finalist Robbie Bell, and frankly struggled in the bright weather though managed four fish in various areas of the lake on a variety of methods using either stealth line or midge tip. There was a gentle easterly thoughout Friday, however, so one hardly felt that prepared for what was to unfold on Saturday.

It was obviously going to be a low catch rate day, and most of us thought that four fish would be enough to make the frame, the top 20 of whom would qualify for next year’s England team squads. My boat partner, Steve Collins, who fished with me on Lyn Brenig in the Autumn International in 2004, had put in a lot of practice on Bewl and felt that we needed to concentrate on the bigger fish which he had found in the Bramble Point and cages area of the lake. I was very happy to give Steve command of the boat and to take us there. It is always wise, in my experience, to bow to local knowledge. Steve had set up with a floating line and three fly washing line rig. My own rig was similar, though I elected for a midge tip line and four flies. The crucial point fly in Steve’s case was a variation of the Cat’s Whisker booby (size 10), while I went for my ever faithful Silver Invicta booby, though comparatively smaller, in a size 14. This pattern is ideal at fry time, I find, being slightly buoyant and with the colours and flash to represent the pin fry which are abundant in Bewl. I prefer the smaller size because it is accepted so readily by the fish, which by this time of year are much more naturalised, and probably spooky, than earlier in the season. I also had Diawl Bach and Hare’s Ear nymphs (all in size 12) on droppers hanging between fly line and point fly, while Steve had similar, though in larger size 10s.

Overall leader length was fairly long, at about 17 feet, with a fly separation of four feet. It was crucial to put in a fairly long cast and turn over the whole team; not easy in the windless conditions with buoyant patterns on point, and to fish almost static. Even using floating lines, the team of nymphs soon submerge the buoyant fly which sinks smoothly, following the track of the nymphs. Fluorocarbon aids this and I nearly always use 6lb Fulling Mill or Greylon fluorocarbon for this method. Smaller nymphs and copolymer, however, yield a slower sink rate which can be useful. It was a matter of grinding it out and not losing one’s nerve. There were very long periods with no activity whatsoever, and it was so tempting to go elsewhere or to change methods, but this would have been tactically wrong. When the takes finally came it was also crucial not to strike. The first take I had produced just this response and I lost the fish. The next take, happily only two casts later, I left alone until everything tightened up and brought me my first fish to the net.

By noon, under the blistering sun, Steve had three good fish in the bag to my single trout. We could see that very few trout were being caught around us, so were not too disappointed with six hours yet to go. I was tempted to move elsewhere, but we knew there were fish here and they were undeniably good fish. Then, I had a magnificent, near four pounder take the Silver Invicta booby on the surface and almost give me heart failure for several minutes as it fought like no other Bewl trout I can remember (during which Steve kindly stopped fishing so that I could deal with the fish – thanks, Steve, I will always remember this). It was now a matter of persistence and not allowing our heads to drop, even during hours of little or nothing happening in the relentless heat. It was crucial to retrieve incredibly slowly, barely moving the flies at all, and absolutely not to strike when a take finally came, allowing the fish to swim off with the flies. The chances came and we each finished with five very good trout, taken on either the boobies or Diawl Bach nymphs. In both cases our five fish weighed more than other bags of six or seven, such was the value of targeting the big fish with an appropriate method.

Such a hugely tactical match has produced an experienced team for next year’s internationals. It is a sign of the times that the average age of England teams is quite high, and the standard of competition, while not the popularity, is very high indeed. It is great to be back in the loch-style team with some of my old team-mates. Paul Davison had a great result, at 4th, while Trevor Colclough managed 15th and we welcome Scott Nellins (16th) from Hardy Greys for his first senior team place. Stalwart, John Horsey has qualified yet again, in 13th place. Interestingly, John managed his seven fish on dry fly. 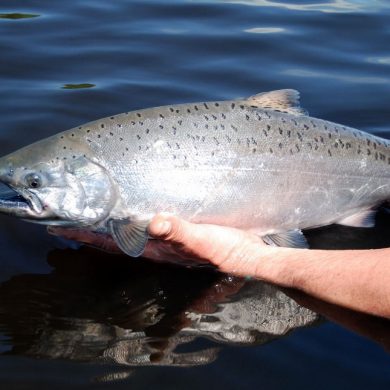