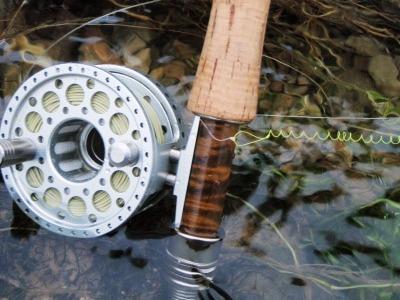 Fishing on the Frontier – Part 37: Leader to Hand

I prefer the significant advantages that very long leaders offer at the all-important sub 10 metre range on rivers.  These advantages are dominated by the improved presentation over conventional fly line techniques, with dry fly or nymph, including spider and hybrid duo and trio methods.  I go so far as to suggest that my own sport has been revolutionised by this radical approach which has completely re-enthused me over the presentation possibilities.

Stemming mostly from the European competitive sector, the ‘French Leader’ approach was largely used for fishing very small nymphs, in low, clear water, for ultra-wary trout and grayling, so typical of European rivers during summer and autumn.  Novel indicators were designed, especially the coiled, fluorescent monofilament type, and the sensitivity and effectiveness of the fundamental technique was staggering.  Yet, I think, because this approach has come from the competitive sector, there has been very slow take up in Britain.  Currently, the leaders in this technique are the French and the Czechs, with several other continental European teams working at it, including the British.  Some British competitors are noticeably quiet about the method, and I do know that several are working away at it, but perhaps because of its effectiveness they are not keen to broadcast their findings; typical of our countrymen.  Some of the Europeans are much more eager to communicate and share.

“It has changed the way I fish!”

Primarily, French Leader was and still is seen as a nymph fishing presentation approach, for which it is manifestly so effective.  What is generally not known is the simply unbeatable presentation we can achieve with dry fly, and it is this, for me, that has been such an extraordinary discovery.  It has changed the way I fish!  In almost all ways it is superior to conventional fly line approach.  Astonishingly, while considered a very short range approach by many, l-to-h actually allows presentation beyond the all-important 10 metres.  I have caught myself many times pushing the effective limit out to 12 metres, and I would not have considered this possible, on such a broad range of water types, even two or three years ago.

I have spent a huge amount of time comparing fly line presentation with l-to-h, for both nymph fishing and dry.  Overall, the new approach wins comfortably, even immensely, though one must recognise certain limitations, or areas in which the fly line still wins.  One can, for example, push slightly further into the wind, and achieve a reasonable turnover at this more acute angle, with fly line and short leader, than with the very long leader, though this is marginal, really, and in truth the presentation in the former is often compromised, or far from ideal.  Secondly, and more significantly, accuracy is diminished with l-to-h, and it takes considerable practice in order to achieve a consistent and satisfactory degree of accuracy.

On the positive side, however, l-to-h allows phenomenally good presentation, and allows repeated casting over very sensitive wild trout and grayling without spooking, which is a massive advantage if you think about it.  I have so often committed to a difficult fish, chosen the ideal angle and range and put in a cast which was rejected, perhaps repeatedly, only to have the fish rise in the end (mostly to plume tips).  I know only too well that conventional fly line presentation would have destroyed my chances with almost all these fish.  There is so little disturbance.

I should add that there is no short cut to getting it right with this approach, either in terms of the tackle or the time spent in its practice.  I have used a lot of rods and leader rigs and have no hesitation in recommending to you the Greys Streamflex 11′ #3.  This is the best tool for the job by a huge margin.  The custom-built 12′ monsters on Hends and other blanks you might see on European rivers are good for l-to-h with single and double nymph presentation, but are almost useless for other methods, particularly dry fly.  The Streamflex can be used all day, for any river method, with or without fly line, other than streamer, of course, which is altogether another method.  The leader itself is crucial, not least because it is also the casting mass, like a fly line.  I have experimented with a wide variety and the best by far is a custom-built design consisting of 30 lbs Greys copolymer (10-12 metres) to a shortened, tapered copolymer leader (one metre), to a braid or indicator section (15-20cm), followed by the tippet.  The connections are all two turn Water knots, well bedded down and cut flush to the knot, other than the braid section (nylon mono braid) which is looped at each end: leader and tippet is attached to this via tucked half bloods.  This takes Mucilin very well and, if nymph fishing, acts as an excellent indicator.  You will be surprised just how well this casts.  You have to use an overhead (rolls and Speys are not possible because of a lack of surface tension and casting mass), and will find you need a very crisp casting stroke, keeping the stop points high compared with casting a fly line.

Yes, it takes time, and practice, but once you are over the hurdles, you will, as I do, wonder at the incredible presentation and delicacy of this approach, and at all the years we have spent trying to match and load line to rod in a conventional sense.  The best of it, I think, comes from the simply awesome presentation possibilities with dry fly and the lack of ‘line sag’ between rod tip and braid section, minimising drag and optimising control.

People have remarked that fly line manufacturers must be rather unhappy with this l-to-h technique, but I think the opposite applies.  Here is an immense opportunity for the development of suitable fly lines to replace the hybridised leader section; a whole new marketplace awaits, because this low loading with a long rod, supreme control and presentation, is here to stay.  Actually, we are at the beginning right now: river fly fishing for trout and grayling is on the cusp of major change, which has not happened for a very long time. 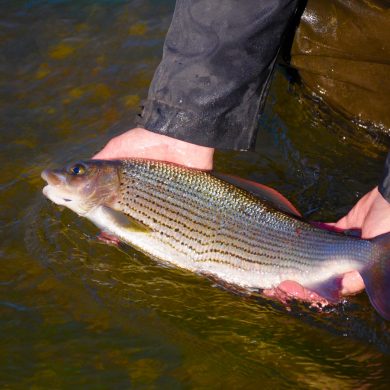