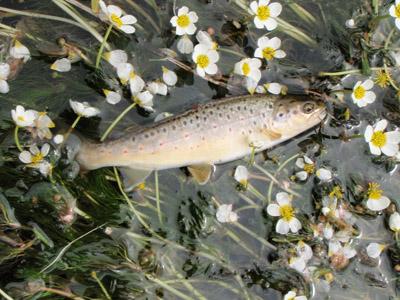 A beautiful wild brown trout on a bed of ranunculus.
Jeremy Lucas

Fishing on the Frontier – Part 49: The Conservation Frontier

I have long been fascinated and driven by what I perceive as the frontier in fly fishing. But there are numerous frontiers out there. Most obviously, they are the new places where we seek trout, or any fly-caught species, with fly.

There remains enough potential out there for any of us to make new discoveries and define our own personal frontiers.  My nephew, Adam, has recently moved to Serbia, and this is yielding me the perfect excuse to explore the numerous, comparatively unknown rivers in that country of surprises.  There is, also, the frontier of technique, where we hone and extend our tackle and abilities in order to make the entire process more effective, or more elegant perhaps.  This particular area has been a passion of mine for many years.  Then, niggling away at first, but growing inexorably until it becomes the essence of what consumes us fly fishers, we find ourselves right up on the frontier which has more meaning and value than any other; that of the conservation of wild waters and the fish and other life they support.

Some years ago my family bought a large field through which flows about 300 metres of a substantial upland feeder beck to the river Eden. Overgrazing and farm damage from upstream had seriously degraded the habitats within this beck, and there were few if any trout present, at least all year round.  We did see a few fish rising during summer hatches on the beck and suspected that these had migrated up from deeper water downstream.  These occasional sightings quickened the pulse and gave a hint of how the beck must once have been, and might yet be again.  For most months the only fish to be found were small numbers of bullheads, sticklebacks and stone loach.  The water crowfoot (ranunculus), which once had clothed this entire beck, was almost completely absent and the banks were devoid of substrate-supporting trees other than a giant 250 year old ash and some flood-damaged hawthorns.

The beck was in such a sorry state, and was indeed rather depressing being typical of what the entire Eden system has been allowed to become, so severely degraded by agricultural activity.  Contradictory, really, when one considers that the entire system is not only a SSSI, but also a rare example of an English European Special Area of Conservation.  Plainly, these designations have meant little for the conservation of this special river system.

With help and advice from numerous organisations, including Eden Rivers Trust, Woodland Trust, Environment Agency and Cumbria Wildlife Trust, we began our dream of restoring the beck into an exemplar, natural site, centred on its ability to sustain a wild trout population.  In the first instance this involved planting the banks with indigenous trees such as alder, ash, willow and hazel so that the sensitive substrate could be stabilised, particularly in light of the expected increased fluctuations between drought and flood. Soon after this, we attained permission to transplant some ranunculus from a site lower downstream.  We saw this as the ‘core’ activity, and ventured out from here into a much larger planting on one, hilly side of the beck with tree species as advised by the Woodland Trust, largely of oak, ash, rowan, birch and field maple.  On the other side of the beck, Cumbria Wildlife Trust are helping to restore a wild hay meadow (now very rare in England), and even this is buffered by the alder and willow already established along the banks.  And then, suddenly, we made a remarkable discovery…

It was last year in the middle of the wet, cool summer, but on a sunny, calm afternoon.  The crowfoot carpeted the surface of the beck, a catastrophe of white flowers, laced with meanders and channels of beautifully clear, swift flow.  I stood at the downstream limit, entranced by the vision before me.  Various caddis, upwing and stonefly species were simultaneously hatching and I could see three separate trout rising frantically; more, in fact, than I had ever previously seen on this entire section.  In the clear channels the gravel shone white, orange and yellow, so manifestly contrasting the former green swathe of filamentous algae that had consumed the beck before the re-establishment of the crowfoot.  Auspiciously, this was the first time I had ever taken a rod with me to the beck.  I had set up a tenkara with a plume tip, a lovely system for approaching fish on a small river at close range with a delicate presentation of the fly.  I walked very slowly upstream, using the cover of the bank side foliage to screen me.  A little way upstream of the enormous ash is a little rapid, above which is a typical glide tail, fringed with crowfoot.  In the fast water here I half-saw, half-imagined a rise.  I had noticed plenty of upwings dropping down over the glide and observed that the position of the possible rise was, indeed, central to the feed lane, so this is where a trout should have been.

On my knees at the water’s edge, I cast short a few times, judging the range and approach angle, before putting the fly right on the throat of fast water up from the suspected fish.  It dropped on the current mere inches before being whisked away by another imperceptible rise.  I tightened and instinctively steered the fish down through the glide and then lifted as it approached the crowfoot in front of me.  It slid up among the flowers and lay on its side.  As I fumbled for the camera I couldn’t take my eyes off this tiny treasure of a fish; my most precious trout of the year, a completely wild fish that had been nurtured in the restored beck.  It seemed to highlight just what is possible with just a little bit of thought and care for a river – mostly actually just keeping at bay the devastating effects of the agricultural abyss that is today’s Eden valley (and, in truth, almost all river valleys in England).

And this is the great, heart-warming discovery.  Trout and their habitats are enormously resilient.  Take away any constraint that is doing damage and they will recover.  In the end, apart from a rudimentary bit of help from us, this short section of beck now looks after itself. Drought and floods will continue to take their episodic toll, and we are always worried about the pollution from the farm upstream, but so far we have observed the beck burst with life again, reaching as stable a state as is possible in such a short section of river.  More so than the carpet of crowfoot flowers, and the yellow hay rattle in the meadow, or the alders and willows beginning to bind the banks, the image of my little trout exemplifies this beautiful ability of nature to recover.  It has showed me how the frontier of conservation is the most worthwhile frontier of all.

Start typing to see results or hit ESC to close
salmon fly fishing chub roach pike
See all results
More Stories
Breaching the Veazie Dam
This website uses cookies to improve your experience. We'll assume you're ok with this, but you can opt-out if you wish.Accept Reject Read More
Cookies Policy