Fishing on the Frontier – Part 5: Presentation

So, we’re on the river, in the water, prowling. I like to think that it looks how it feels. Like a panther, stalking. A predator, perfectly tuned to the hunt.

After all these years, after so many, many times wading the river, especially the big, wild, European rivers, I like to think we have got it right. Right enough, anyway, that we have a solution.

For so many years I have been casting up the stream, and across and down. I have stolen the angles, rather than accept a simply ‘comfortable’ position, finally understanding that, escaped from British tradition, it is all about finding that right angle on a fish: presentation.

If you can present your fly in front of a trout, even a grayling, such that at the moment the fish has recognition of your fly it is not alarmed, then the bulk of the job is completed. Whatever comes next, really, is largely inconsequential. You can dead drift the fly – nymph, spider or dry – or you can induce – particularly a wet fly or streamer – but the bottom line is if the fish is not alerted to danger, it will react as if your fly is potential food. Let’s go back a stage. Let’s go back to an English chalk stream, in the summer, when we have a nice view of a fish, ideally a wild fish, which usually means a grayling, and we can put a nymph right on its track. Get it right, make the angle and present the nymph so that the fish is not spooked, and it will take, as surely as God made little green apples. And you can see it so clearly.

You can often see it clearly like this on rivers other than the English chalk. For most of the year on San River you can watch utterly wild trout and grayling react to the fly and to the wading fisherman. Grayling, give us the best insight; always grayling. I mean, trout will react obviously to the fisherman, as to the sensing of any predator. Get too close, or within their vision, even throw a shadow too close to them, and they’re off: not just sinking down into the depths, but a full-blown dash for escape. While grayling will also sometimes behave like this, they will as often simply stop their feeding behaviour. They may remain on the same station in the stream and you can sense that they are wary, but you can get very close to them at times, even big fish, without them appearing to be alarmed. When they are aware of your presence, however, you can drop a nymph right on their heads and they will completely ignore it.

The trick, then, in order for us to see exactly how a fish reacts to our fly, is to get the right angle that allows good visibility of the target fish, and to be close enough ideally to be able to see our nymph (a dry fly is visible at much longer distance), and yet not so close that the fish senses our presence. Often, you have to be aware of fish other than the one that is your target. Alarm demonstrated by any fish in the vicinity will immediately translate to others nearby. We see this all the time on San.

If we get this far, we are then in a position to observe natural feeding behaviour, and reaction to our fly. And this brings me to one of the keys of presentation. I do a lot of guiding and frequently will point out rising or feeding fish, or likely areas, to my guests. Often these fish are out or range in the sense that they can be reached by a cast, but in order to make that cast control and presentation are compromised. I almost always encourage a guest to wade up on the fish, rather than cast at it, meaning that it is almost always better to wade closer to the fish, bearing in mind the required stealth alluded to above, than cast a long line at it, particularly for actively feeding fish which are to an extent focussed on their prey, rather than being wary of being exposed to predators.

Usually, we can get within 10 metres of a fish, or a shoal, allowing relatively easy presentation and nice control. The closer we are to our target, the fewer the currents and micro-currents, less ripple, less anything to compromise our presentation or, simply, to cause drag (even the underestimated, under-water drag of a badly presented nymph). As the great Eastern European rivers are increasingly showing us, we can get very close to our fish, in large numbers, and with a properly chosen presentation, which might involve very long leaders at times, we have sufficient control that not only produces outstanding catch rates, but elevates presentation to a truly beautiful art form.

If you are interested in fly-fishing expeditions with Jeremy to the San River in Poland please visit Pioneer Flyfishing and don’t forget to mention you saw this on Fish & Fly! Or closer to home he also guides in the Eden area up in the lakes – details at Wilderness Flyfishing 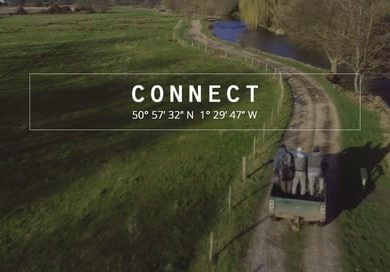