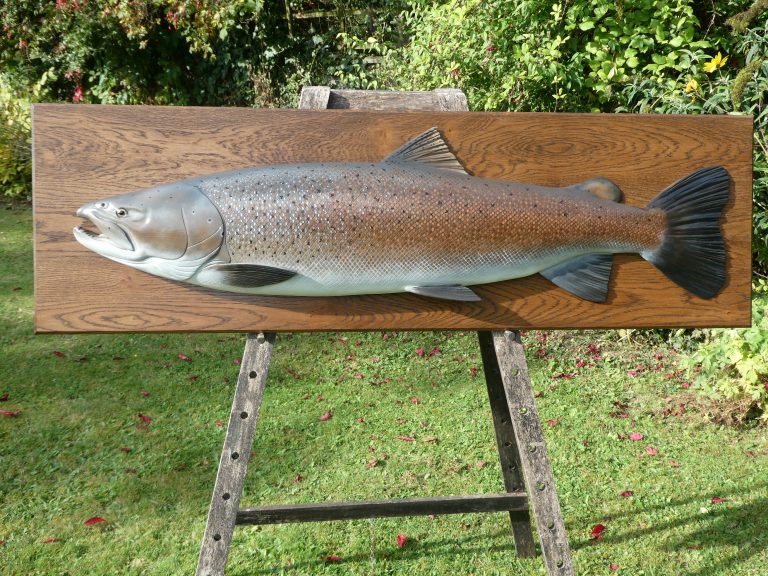 A few weeks ago, we talked about Roger Brookes of Herefordshire, who is keeping the art of fish carving alive. Some of you might just remember that he was in the process of copying a huchen when we visited, and he was kind enough to send an image of the finished result. I think you’ll agree it is quite stunning, and what a momentous memory it will be for the lucky German who landed it from Munich’s river.

Huchen eh? The great Danube salmon – or whatever nickname you want to give it. Hucho hucho I believe in the Latin, but in the flesh a spine-tingling quarry. I made several trips to Eastern Europe in search of them nigh on twenty years ago, some of them as leader of expeditions – if that is not too grand a word! Slovenia was the main venue, but Germany, Austria and Hungary too, I believe, might have served the purpose.

I’ll be up front on this. My biggest huchen weighed a mighty four pounds, but members of my parties had them to mid-twenties, and Slovenian friends caught them to over thirty whilst I was there. And some of those I saw in the water…?

My question is this. How many of you out there have huchen experience? It would seem to me that of all the fly-caught species, the huchen might just be the least targeted by UK anglers, at least. Why that might be baffles me. I would have thought a Slovenian huchen would be one of the most cherished trophies imaginable for a host of reasons.

My memories of them are shrouded in the mists of early Slovenian winters; the season opens the beginning of December or thereabouts. Crystal rivers that run with a tinge of green. Pools heaving with fish of between ten and thirty pounds, and more. Mountains all snow-capped. Heavy forests. The thrill of approaching Christmas, and the crackle of expectation with every cast.

Post-Covid, now might be the time to think of a trip to this extraordinary country barely two hours away by plane, if we are allowed on the things these days! Superb guides. Characterful accommodation. Absorbing fly fishing for potential monsters. Get back to the site if we can help with pointers and, above all, do let us know if you have huchen memories and stories of your own. Please.