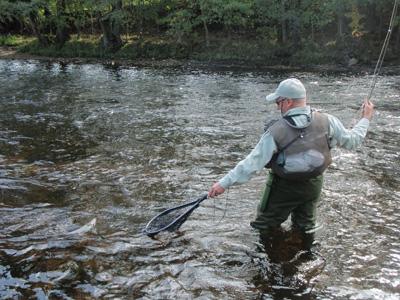 Jeremy Lucas has just returned from an ‘overwhelming’ two weeks in Czechoslovakia and Poland and opens his account here with, amongst other things, some lessons learned on the nature of water that fish will occupy.

Where is the frontier now?

I think it’s still out there, in Europe, both in a conservation, or environmental, sense and a technical fly fishing sense.  Certainly, this is where the great developments in the river sport have taken place within the entire world of fly fishing (with single handed fly rod), and it is here too, in more places than one might imagine, where there is still challenge among completely undamaged waters.  This is where the great European teams have developed their unassailable dominance in the world of river fly fishing, and where England is frankly no better than mid-field.

I have just returned from an overwhelming two weeks with a group of friends in Czech and Poland.  There is so much to write about both of these weeks that I shall just concentrate on part of the Czech trip in this article.  In fact so much happened, and was discovered, that this week alone will have to be described in several articles.

We travelled to the enormous Sumava National Park in south west Bohemia and stayed for the most part at the Hotel Annin, hosted by the enormously hospitable Patrik Jedlicka.  We fished the magnificent Otava, for four days, and then travelled farther south to fish the Teplá Vltava, main feeder river to the Vltava tailwater.

Our group consisted of a spectrum of anglers ranging from an excellent nymph-orientated angler, in the form of Paul Sissons, at one extreme, to my own dry fly dedicated approach at the other.  The others; Sue Sissons, Neil Berry, Bertrand Rossert, Tom Speak and Gavin Walsh, along with our friend and trip organiser Wojtek Gibinski, tended firstly towards the nymph end of the spectrum, but gradually adopted more of a dry fly approach throughout the trip. In truth, both Sue and Wojtek were probably already much closer to the dry fly end of the spectrum.  It was fascinating watching and being part of the development process.  Tom and Gavin are two of the best river fly fishers I have known and their own assimilation of these ‘new’ rivers was rapid.

Otava is incredible, with enormous trout and grayling populations. We fished over about 40 river kilometres from the steep flowing mountain torrent, where the wading was ‘pulverising’ and the quarry entirely wild brown trout, down to the more sedate flows below the town of Susice, where all species were encountered, with grayling dominant.
Just about all water types were experienced and for my part the plume tip reigned utterly supreme on all of them with the exception of the tumbling mountain sections and some of the ‘bouncy’ rapids on the lower sections, particularly in downstream winds where a duo rig was preferential simply because it allowed a better upstream presentation and a stabilised drift of the dry fly (a size 17 Oppo, stabilised by a size 16 PTN with 2mm tungsten bead).

Every day on Otava was fascinating, but one stands out in particular, at least in a technical sense.  Having spent an hour or so with Neil on a simply gorgeous pool and run-in, I headed off a little upstream to the rapid above, which was on a slight bend in the river.  I love taking on such water nowadays – that which others tend to pass by.  It has long struck me, actually, that where competitors can really lift their skill levels is on just such water, which has its technical difficulties.  I am of the opinion that some otherwise outstanding competitors do themselves, and their teams, great disservice simply by choosing ‘easy’ water on which to practice all the time.  It is very difficult to walk past the better water, of course, because we all love to catch fish and such water offers far improved prospects; although development and skills do not come from this, but rather from fishing the apparently second-rate water, or worse.

I found myself at the bottom of the rapid, staring up into a cool down-streamer, under a glaring autumn sun.  On either side, close to both banks, were deeper, clearer runs, but no rises.  Leaves scattered the surface, but none of the usual pale wateries, so early in the day.  This was not ideal for the plume tip, perhaps?  I opted for a duo rig (using the outstanding 6X Fulling Mill copolymer), described above, on my usual 10′ two weight Streamflex, and eased in from the lip of the rapid; tentative, exploratory casts into the clear, ‘held up’ water on the near bank (never wade somewhere before putting your fly there first, as my great friend Stuart Crofts used to remind me) and then tracking down the seam, to be rewarded by the first fish, a rainbow, which snatched at the nymph, right on the seam water. What I thought was a small grayling also rose to the Oppo here, but I failed to connect.  I was soon wading and fishing in the fast water itself, and here came revelation.

The rapid was between mid-calf and  mid-thigh depth, and quite racy.  The first fish I took was a grayling of 30cm, which took the nymph, and this was followed by another 11 grayling up to 35cm and two rainbows of close to 40cm each, all of which came to the Oppo as I worked along the 20 metres of rapid, right up the middle of the river. I followed this track because this is where the fish told me they were, both in the form of ‘out of the blue’ rises, and because once out there, this is where I saw the rises.

Completely unobserved from downstream, or from the bank, once in the water, locked onto the dynamics of the place, which I call being engaged with the fishing, I was able to see the very subtle flickers of rises; of course to pale watery duns.  It was magical fishing really, right on the edge of what I consider possible, and, indeed, something of a surprise from such water.

A consolidation, perhaps? Fish need three things: oxygen, cover and food.  A rapid, in summer time, provides all of these.  Fast water is nothing to a trout, and less so to a grayling.  Never think that they will not occupy fast water because of its pace.  It has everything they need.

I felt euphoric as I stepped out from that rapid in the early afternoon: 15 fish from water that almost anyone would walk by.  I wandered down to see how Neil was getting on; and I hardly needed to ask when seeing his smiling face.  We had lunch together, watching first a dipper, then a marauding kingfisher, working along the far bank.  Neil was going to stay exactly where he was, so I had an idea.  What would the rapid yield after an hour’s rest?
Returning there, I found the wind was still fairly strong, so I remained with the duo rig, but elected to cross at the tail and work up the rapid from the far shore, which would, by default, give a slightly different presentation and allow me to cover different drift lines.
The wading was more hostile from here and I think I caused simply too much disturbance, even though I was careful to place my feet only in the general area from which I had taken most of the fish earlier.  By the time I had reached the top of the run, I had caught only two grayling, each around 30cm.  Some contrast, although, frankly, I did not fish this as well as I might, because of my inability to deal properly with the wading demands.
After another trip downstream to see Bertrand and Neil, I returned again to the rapid, to find the wind had dropped, though still slightly downstream, with the sun just beginning to be covered by the tree canopy, throwing some of the water into shadow.  I wanted, also, to complete the experiment.

I no longer needed the stabilised duo rig and I could fish a far more representative (of PWDs) dry pattern as a consequence: the plume tip in a 21.  I took my original entry into the river, knowing the wading was far better from this approach, and eased my way up the seam, towards the fast water.  There were no visible rises, but the water looked so utterly perfect for grayling.  I was wondering if my earlier sessions had caught the bulk of the fish in this run or that I had spooked everything (which I knew really was not the case) when right under the rod tip the plume tip disappeared into the kiss of a half-imagined rise.  I lifted into what was to be the second best grayling of the day, at just under 40cm.  Then, two metres upstream of this, just into the rapid water beyond the seam, another kiss resulted in the best fish of the day, at marginally over 40cm.  It was enough.  I noticed Gavin coming along the river from upstream and decided that this was a good time to stop.

Great lessons learned, really, about the nature of water that fish will occupy, and their focus on the easiest food-forms that exist – those on and in the surface.  More about the best approach for such fish, in such conditions and circumstances; water in which most would fish nymph, or ‘conventional’ duo, as nymph under dry technique with bulky patterns, rather than a stabilised dry fly rig, with more appropriately-sized patterns.

And finally, that to access the best grayling, in any type of water, perhaps most particularly on water that has seen recent fishing pressure, the dry fly in the form of a plume tip with excellent GISS (general impression of size and shape) will very, very rarely let one down.  It is the frontier.

I shall write more about the Otava, and our extraordinary, subsequent visit to the Vltava, in due course, both here and on my website