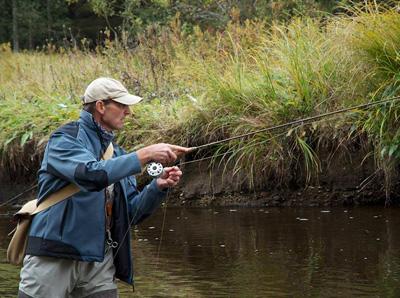 Consideration of good wading, or approach, technique is of prime concern in the entire presentation process.
Jeremy Lucas

Fishing on the Frontier – Part 52: Sumava

Jeremy Lucas continues his exploration of fishing in the Czech Rebublic

When we moved from the Otava region deeper into the Sumava national park of south-west Czech I think we were all a little apprehensive, wondering why we were actually moving from the fabulous fishing we had enjoyed on the Otava (a principle tributary of the legendary Vltava).

My first sight of the Teplá Vltava, however, reminded me instantly of a French chalk stream, with the same sort of scale and pace of flow, as well as the weed beds so reminiscent of a silt-free, calcium-rich water.  I barely suspected, however, that apart from finding something completely different (to fishing elsewhere in Czech), we would find something very special.

We met up with our great friend Pat Stevens, who welcomed us to what he described as his favourite river in the world: high praise indeed! I walked off upstream with Pat and Bertrand, while the rest of the group went downstream, with Jan Siman.

A flat, reasonably laminar flow, with deeply overgrown wild meadow and woodland banks, again typical of northern France, contrasted with the rush and tumble of Otava.  While Pat waded into the tail of a long, gently curving glide, Bertrand and I continued further upstream.  I left Bertrand after another few hundred metres, where he had an interesting series of glides and faster sections, and then pushed on farther into what felt like wilderness.  With no evidence of a hatch, no rising fish, and a section of smooth, deep water (and reminding myself again that I was not back on an Artois chalk stream) I set up with a micro duo rig on the 10′ two weight Streamflex and ‘fished the stream’, blind.  After a few casts the Oppo dived away and I brought to hand my first Vltava fish; a lovely fat dace, on the PTN.  In spite of several other takes, all of which were missed, this was to be the only dace I caught in two days on this river.

Farther upstream the river changed character again, flowing now a little more steeply, if intermittently so, and through more dense woodland, rather than meadow.  The glides were still well defined, but the faster water became more like rapids, with the Milfoil and Ranunculus beds smothering the gravels and producing distinct channels of crystal clear flow.

This character of river is not best suited to duo, or even nymph generally, so I altered my rig to fish a single Oppo (size 19), which I could accurately place on the now complex currents and folds.  This searching technique, with a single dry fly, is ideally suited to such rivers, particularly those with overgrown banks, as here.  Indeed, the fixed leader, tenkara approach is also ideally suited to this sort of water, because the range at which one fishes is all within 10 metres, and typically between five and seven.

I began to notice the occasional rise, and these were wherever the river channelled into a foam lane.  Although not seeing them, I suspected pale wateries, as we had observed on the Otava.  Curiously (though Pat had mentioned this earlier) all the rises were very close to the bank; but then this is where the main foam lanes were, at least on the numerous outside bends of the river.

It was not long before my first Teplá grayling came to hand and a pattern set in whereby I tried to choose the best approach angle to a foam lane, accounting for the wildly inconsistent, cold breeze, and brought up the grayling often within mere centimetres of the bank.  On no river anywhere have I found so many grayling concentrated so close to the bank.  It is a consequence, of course, of the nature of the water, or the flow.  Grayling will always adopt the best feeding positions on a river, thus to be able to feed most efficiently, quite unlike the more ‘mobile’, hunting behaviour of trout.  In any case, before the hatch really developed, I was rather surprised by this.

It was early afternoon when, on the more glide-like sections with less distinct foam lanes, I began to see pale watery duns, and fish rising to them.  The main concern, for efficient fishing, was the wading.  Approach was usually impossible from the banks, though there were a few shallow gravels, so picking one’s way through the water, minimising the disturbance, was the essence of the fishing technique.  Pat, again, had told me that the grayling were not really spooked by the wading anglers; but big grayling will always be wary when there is any disturbance, or change from the norm, so I was as careful as I could be, slowly making my way upstream.

I often think that fishing instructors/guides often miss this aspect of our fishing, reverting to the easy option of helping with casting technique, which, on a small river, is so much less important.  Consideration of good wading, or approach, technique, should be of prime concern in the entire presentation process.

The average size of grayling was exceptional for such a small stream, averaging between 30 and 35cm, along with a few small trout.  I gradually became aware, over the course of perhaps two and a half hours since I had left Pat and Bertrand downstream and started fishing, that I was beginning to properly engage this river, learning how to fish it better with every step, though the catch rate was fairly slow, I felt; with 11 grayling, four trout and the solitary dace.

On the basis that the pale watery hatch was now well underway, I had switched to a size 21 plume tip.  And then, wading up onto a particularly appealing swathe of green and gravel, laced with rushing channels, there came a moment within a moment; one of those rare and delightful periods of fly fishing perfection about which we dream.

There was a continuous patina of rising fish, all undoubtedly grayling, strangely only visible when I eased into casting range, and yet becoming more visible by the second as one tuned into this phenomenal occurrence.  I could hear the sipping sound of the little rises above the rush of water and I was using my ears as much as my eyes to pick out the targets.  I could see the channels of PWDs and observe exactly why the grayling were positioned as they were, able to clip off whichever dun they wanted.  And yet they were everywhere.  I was suddenly right in among them, before even realising how I had become so completely surrounded by them, giving credence to Pat’s comment about the grayling not being easily spooked, and I was able to drop the plume tip on the feed lanes with precision, time after time.

The number of fish here, in a 15 metre length of river (which was less than 10 metres wide) was utterly incredible.  Yes, it was perfect hatch water, perfect holding water for grayling, no question, but in the next three quarters of an hour, 40 grayling came to hand, all between 25 and 42cm, and every single one of them resulting from a cast at an observed rise.  It became an almost surreal pattern; a routine of pick out the target, place the plume tip a little upstream, dropping it almost into the fish’s mouth, lift, turn the fish and hold it away from the weed before steering it down to the waiting hand.  Unhooking and drying of the CDC became the rate determining factor, such that my cotton shirt developed a big wet patch (I always wear cotton on which to dry CDC).  It was such a rapid catch rate with each fish on the hook for mere seconds, that I believe many, possibly most, of the fish caught, returned almost immediately to feeding on release.

As the hatch slowly diminished, though with fish still rising, I broke the trance and turned away downstream to go and find my companions.  I was again in a state of wonder at the extraordinary natural phenomena which we fly fishers can, briefly, encounter on the river.  On this river, Teplá Vltava, high in the Sumava above Lake Lipno, in that brief moment, I experienced something completely unexpected to the extent that it was overwhelming.  I still think about it now, still remember trying to explain it all to my companions, and still so grateful that these miraculous rivers can survive in modern, agricultural Europe.

I will recount more about our autumn trip to Czech, and the awesome San river in south-east Poland, in further articles here and on my website: www.presentationflyfishing.com.

There is so much to say, but for now I can only suggest that any dedicated river fly fisher should at least once venture to Czech, to stay at the Hotel Annin on the Otava, and then make the little extra journey to Teplá Vltava, perhaps under the expert guidance of river master Jan Siman: here lies the possibility of something unparalleled in our sport.