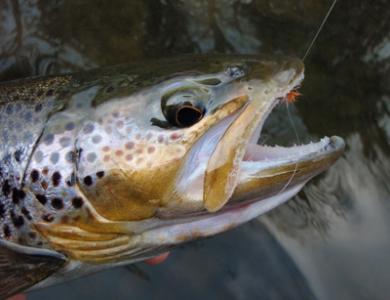 An Eden trout taken on the Oppo duo rig - Jeremy Lucas reckons it's time to focus on the surface possibilities of the method.
Jeremy Lucas

Fishing on the Frontier – Part 55: Duo for Purpose

This month Jeremy lucas takes an in-depth look at fishing the duo, or nymph under dry, and offers some timely advice on how to get the best from the method.

Over the last decade one of the significant innovations in river fishing (which have far outstripped those on still waters) has been the rise in popularity of fishing duo, or nymph under dry.

It is probably fair to say that most river anglers view duo as a form of indicator fishing; in the extreme rather like the still water angler’s ‘bung’ method.  Some British competitors use this extreme approach on the river and one might be surprised at this because there is utterly no point in an international sense because the method is disallowed under FIPS-Mouche rules.  On multiple fly venues, however, duo, as described below, is certainly within the rules and provides for many a ‘go-to’ standard approach.
Although… It might be worth considering that the outstanding top European teams rarely exploit this method.  It has even been heard on the circuit that team coaches and managers have forbidden the use of duo in practice, because it is considered to be a compromise method and it is, therefore, much better to find the method that is more suitable for the prevalent water and conditions.  Certainly in Britain, as in the US, there is overmuch emphasis on the use of what most recognise as duo indicator fishing, and a commensurate lack of development with more appropriate methods.

I have had a love/hate relationship with duo.  In the late 1990s a lot of us saw it as a panacea, but within a few years one began to understand what it was that those top Europeans meant about its limitations as it can very quickly stifle an angler’s development, reducing the skill set and, in a competitive sense (or, more importantly, a developmental sense), this is destructive.

Without a doubt it is better to take on a river with the entire range of approaches that are possible, rather than to cop out and fish the duo as it is appreciated by most: a fairly bulky, or buoyant dry fly with a nymph suspended beneath, in the point position.

The Klinkhamer is famed for the dry fly role in the duo, possibly over and above its use as a singleton dry fly because it is a buoyant pattern which requires little maintenance and it is also highly visible to the angler at the normal fishing range at which the duo is most effective (6-10m).  There is a lot of variation, mostly in the means of attachment of the dry fly and the distance between dry fly and nymph, which controls the depth at which the nymph can swim through on a dead drift.  Most favour the NZ attachment, with the tippet tail tied directly to the hook shank or bend.  A minority favour the conventional, short dropper.  I am certainly within that minority.

The view of duo being primarily a nymph-based method which incorporates a dry fly to control depth and to act as an indicator is overwhelming in the river sport of today.  This is a shame in my view, because anglers are missing out hugely on the best that duo can give, particularly in terms of it being an adaptation of dry fly fishing in order to improve presentation in inclement conditions, notably in a downstream wind.

In order to appreciate what I mean one should consider the sort of water that the Klinkhamer is most successful.  As suggested by the originator of this pattern himself, Hans van Klinken, it was designed for fast, streamy water, and it is vastly more successful on this sort of broken water than it is on smooth water.  This is common to all bulky patterns.  We cannot expect that they will out-perform slender, more imitative patterns on unbroken water.  They are, however, well suited to supporting a nymph, because of their buoyancy.

Here is the first part of the compromise.  It was a recognition of the limitations of Klinkhamer-style patterns that was one of the main hurdles for me in the 1990s.  Coming down onto smooth water was always a problem, no matter how successful these patterns, and duo, had been on the fast water.  I was fishing a great deal in both Scandinavia and Scotland at the time, as well as on the more generally more sedate flows of English rivers.  It was for this reason that I designed the Oppo, a parachute pattern that has been described extensively elsewhere.  What I wanted, in short, was a buoyant pattern (in common with the Klinkhamer), one capable of supporting a nymph, but one which also could induce fish in its own right, on smooth water.

Too often had I experienced the ‘dullness’ of rejection, or fish coming short, to bulky, rough water patterns.  While the Oppo was the result, the wonderful by-product of a whole new world of duo was opened for me. The essence was that it now had become primarily a dry fly method, made possible by the stabilising influence of a nymph.

It is a juxtaposition of mind-set.  Those duo anglers who take the majority of their fish on the nymph are fishing duo as a nymph-orientated method.  Their focus is on the nymph with the dry fly present as a means of depth control (of the nymph) and, primarily, take detection.  Nothing wrong with that, of course, but it is very much the tip of the iceberg of possibilities.  Once the angler begins to perceive that the method can be dry fly-orientated, such that the nymph is there for the purpose of improving the dry fly presentation, a whole new world of possibility opens for us.

Why is this significant?

For much of each year, from some time in the early spring until late autumn, trout and grayling are focussed on the surface.  They are looking upwards for their food forms and this is the nature of the feeding dynamics in the warmer months.  The most easily available and vulnerable food forms are the nymphs about to hatch and in the process of hatching, and then the emerged adult flies on the surface.  During this long period of the year, on most days, one of the most common mistakes the fly fisher makes is to fish nymph too deep, below the focus of the fish.
Even when there are few fish actually observed rising they will come up to a dry fly, or shallow-running nymph, as on a short duo rig.  Once into this mind-set, and given a suitable dry fly for purpose, the duo angler notices that far more fish actually take the dry fly in such a rig.  This is the reason why I strongly favour the dropper style of attachment of the dry fly, because presentation is so much better and also the hook up ratio is considerably improved.

So, my top tip as we nudge into the thrill of a new trout season, and begin to see midges and dark olives coming off the water, is to focus much more on the surface possibilities, which is exactly what the trout (and grayling) will do by nature of their feeding opportunities.

Of course, duo gives us a means of giving a compromise selection of nymph and dry to the fish; but far better than this it offers us a means of achieving significantly better presentation without compromise to inclement conditions, particularly the gusty across and downstream wind.  In the first instance, just scale down the size of both nymph and dry fly – get away from the mind set of ‘bulk for buoyancy’, because this will almost ensure that the duo rig will only work for the nymph with just occasional trout in broken water to the dry.

A fly such as a size 17 Oppo, stabilised by a 16 PTN, the latter with or without a 1.5mm or 2.0mm tungsten bead, on a tippet of 0.12mm copolymer (I strongly recommend the Fulling Mill copolymer in 5X or 6X for this) will be a great starting point for the spring, scaling down further later in the year.  Distance between the dropper and point should be somewhere around a metre or less, but rarely more – remember that the purpose of that little nymph is to help with turnover, to improve accuracy and then to stabilise the drift of the dry fly.  Actual takes to the nymph are a bonus.

It might be of interest to note that through the last three years of my own fishing while using duo in the spring the ratio of trout and grayling taken on dry fly and nymph is roughly equal.  From sometime in May, however, the balance tips steeply towards the dry fly, such that by the autumn dry fly is about 90 per cent dominant.

Start typing to see results or hit ESC to close
salmon fly fishing River Wye conservation grayling
See all results
More Stories
The 2014 Malloch Trophy
This website uses cookies to improve your experience. We'll assume you're ok with this, but you can opt-out if you wish.Accept Reject Read More
Cookies Policy