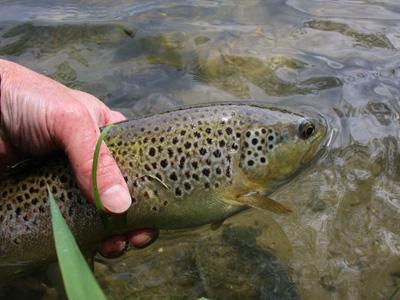 Returning a 2lb brown trout to the l'Aa
Jeremy Lucas

Fishing on the Frontier – Part 56: L’Artois

Jeremy Lucas looks at some of the most consistently challenging fishing he has ever found – on the Artois chalk streams.

I have been so fortunate to have fished in many beautiful places.  These, along with my fishing friends and others met along the way – and the trout and grayling – have defined my fishing life.  50 years with a fly rod in hand and now I find myself completely consumed by a passion to explore with that fly rod in a place I am making my home; the river valleys lacing the chalk plateau of l’Artois in northern France.  For many years I have been drawn here – the history and beauty of the landscape, the echoes of two great wars – and, very recently in the scale of a fishing life, I have begun to discover the fascinating trout streams of the region.

Before you all start to book your gites and Channel Tunnel crossings, however, let me say right here: this is about the most consistently challenging fishing I have ever found, for trout, and I have yet to catch a grayling here.  I have been tantalisingly close to the latter, on l’Aa, though they have, so far, eluded me.

L’Aa is the perfect storm – the idyllic chalk stream, reminiscent, for me, of the Great Stour, in Kent.  It flows generally north from the plateau to its network of canals, rivers and marshland between St. Omer and Dunkirk.  For about 30 km of its flow it is quintessential trout and grayling habitat, through Rumilly, Renty, Fauquembergues, Ouve Wirquin, Wavrans, Esquerdes, Lumbres, Wizernes…  There were V1 and V2 construction and launch sites here in the beautiful countryside once overflown by British bombers en route to the German cities.  Now remains the idyll, and one that is hardly recognised by visiting fly fishers; but then the French are fortunate to have an enormous wealth and variety of fly fishing opportunity across their entire, grand country.

I fish these Artois chalk streams with a fresh view on the sport.  I forget about numbers and the often-frenzied fishing so typical of British rivers.  I think more in terms of the streams of southern England forty and fifty years ago, when those rivers were undamaged by agriculture and possessed the same wildness one sees today in the Artois.  Perhaps it is more to do with space, and tranquillity – as in my childhood in Kent.  The fishing is so reminiscent of what nurtured me then.  There were no stocked fish in those days, and the trout populations were entirely wild and self-sustaining.  In l’Artois, while stocking with rainbows (arc-en-ciel) takes place on some sections, there is a huge conservation effort on these rivers so that they too can be self-sustaining with salmonid populations, including the revered ombre de l’eau – the water shadow; European grayling.

I suppose it is fishing for those with a certain leaning of mind; for those who revel in the challenge of what is, often, barely possible with a fly rod; for those who seek trout and grayling populations which are sustainable – which means low – providing fish which are, in the main, naturally grown-on.  It is for those who want the above among beautiful countryside where conservation measures are really just that; set in place for the benefit of the habitats they protect, and respected by all from local inhabitants to the farmers of this lovely landscape to the fishermen and the visitors who come to know this region.  Although, with the nature of the fishing, while a few might be enthralled, as I am, many more will simply miss the much easier sport on British rivers; so be warned.

Why is the fishing so difficult?

In part it is to do with those aforementioned conservation measures, because the river habitats come first, for the wildlife they possess, and not the fisherman.  Trees hem in the banks, with limited wading opportunities, as wading is often prohibited in order to protect the spawning gravels and the invertebrates in the substrate.  Generally, there is a much thicker riverbank margin, which is fenced off from agriculture, than one commonly finds in England and watering areas are also limited, and well defined, so that cattle do not trample the majority off the bank.

On the debit side, the attitude towards taking fish is prevalent in France, with very high limits in place, typically allowing six fish per day.  Even on stocked waters this is clearly unsustainable and leads to very sparse trout populations.  The prevalence of bait fishing, particularly for the regularly stocked rainbow trout on some rivers, also makes sport more challenging for the fly fisher.  These attitudes are changing, with an ever-increasing number of no kill and/or fly only sections, but there is a long way to go before the British ethos of catch and release is so dominant.  That having been said, however, the grayling now enjoys almost complete protection and it is hoped and expected that on those rivers where the grayling survives, such as l’Aa, its populations will increase.

Fishermen will find all the usual invertebrate species associated with chalk streams, though on some of the rivers of Les Sept Vallées area, such as la Ternoise, the population of gammarus shrimps is colossal and seems to be the dominant trout food-form, making a ‘nymph’ approach generally more successful than dry fly.  On the other hand, l’Aa, is blessed with a broad range of up-wings and caddis and provides exceptional (though always challenging) dry fly fishing.  One can wade after the last Sunday in May on most sections of this river, though even so it is often better to stay out of the water and work out a suitable casting or presentation strategy from the cover of the bankside.

There is the chance, just a chance, that one will catch a trout, or grayling, from these magical rivers.  For sure, we learn here at an exponential rate, which is surely why several members of the French national team have perfected their great skills on these waters.  And this must be part of the mind-set, the attraction.  When, finally, that wild brown trout sips in the fly from among the stream of pale wateries drifting by, and is steered in to hand, the feeling is euphoric.  I am now into double figures of trout from l’Aa – half on nymph, half on dry – and I can recall each and every one with utter clarity.  I earned them.  Well, after all, it took me 50 years to catch them…

Those tempted by the exacting fishing of L’Artois, might in the first instance explore the excellent AAPPMA (Department 62) website, which is a list of all the associations which can offer fishing on a daily, weekly or season basis (one can also buy the national rod licence – carte majeure – on this site).  There are many of these associations throughout the department, some of which offer ‘reciprocité’, which means that with a permit to fish one of them the holder can fish any other reciprocating association.  They are all chalk streams of varying size, and one can easily be overwhelmed by the sheer potential here.  Some are barely suitable for fly fishing, being densely over-grown, while others are perfection, though a search through the site does not usually make clear this differentiation, even though the postings include maps and regulations (in French).  You might also follow the postings on my website www.presentationflyfishing.com which increasingly features the Artois rivers.

Start typing to see results or hit ESC to close
salmon fly fishing chub roach pike
See all results
More Stories
Farlows – The Book
This website uses cookies to improve your experience. We'll assume you're ok with this, but you can opt-out if you wish.Accept Reject Read More
Cookies Policy