But it’s not really surprising is it? The fact is we need a crutch to try and compensate for the undoubted challenge of trying to catch a species – Atlantic salmon but there are others – that does not feed in freshwater. A fish that is as wild as the North Atlantic ocean, a fish that needs stout tackle to land, but may be in the mood to shy away from even a 15lb nylon leader (allegedly!)

So what brought on this quasi-rant? Only the fact that a friend who has been fishing the Lakselva river in northern Norway for the past 2 weeks gave me the following picture of paradise via Facebook last night:

‘The river contains both more grilse and salmon than I have seen here before – and plenty of very big ones! People may not be catching masses of the big ones but they are not catching many of the grilse either when you consider the number of fish in the river – the conditions for the last two weeks have been far from ideal, basically the river is pretty low. but it is absolutely stuffed with fish large and small!’

Do you know what I mean – it somehow seems to suggest less than ideal conditions!

But then Jess qualified it with the end of his message, which I particularly like: ‘If you know where to fish at the right times you hook fish. Amazing river and it’s getting better and better every season…’

Salmon fishing, eh? ‘If you know where to fish at the right times you hook fish! 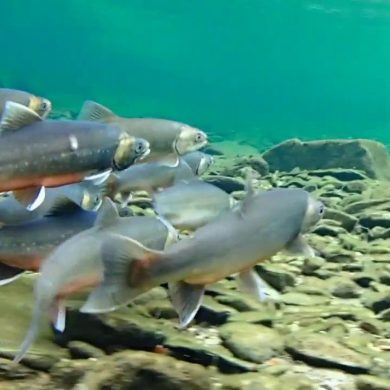