To quote the world’s worst newspaper, 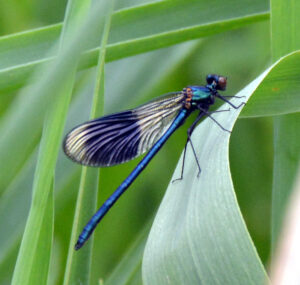 My clever digital weather station recorded a maximum temperature of 37. 4 Celsius last Wednesday afternoon or 99.32 Fantigrade according to the Reverend Richard Cole’s mother. Heat remained oppressive until dusk for almost a week and fishing has been hard as a result. The first and the last few hours have seen fish feed a little but for the bit inbetween they have tucked themselves away and concentrated on just getting through the day. The water temperature is approaching twenty degrees celsius (68 degrees Fantigrade Mrs Cole) and is a few degrees higher further down the river. And while a cyprinid would be living it large and knocking back the doughnuts, a salmonid’s struggles increase for each celsius the water temperature climbs beyond eighteen degrees as the water loses its capacity to hold onto oxygen. Thunder storms in such conditions can be devastating as low air pressure reduces further the ability of a body of water to hold onto its oxygen.

It’s all a bit of a worry, as we still have a lot of summer to see out yet, who knows how this could end? 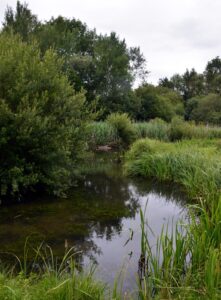 Writ large on the front page of a slightly larger newspaper that doesn’t trumpet boobs and bums (Will we ever get over the 1970s) was the declaration that a large private water company was struggling to meet demand from its groundwater supply and this was the reason for the drop in water pressure in recent days.

The same private water company decreed that there would be no shortage of water this summer, press on regardless with your extravagant use of the eau and, yes, there had been adequate aquifer replenishment during the winter just past.

It is a bit late in the day now to start preserving groundwater stocks. The signs were there at Christmas, but with AGMs pending and a dividend to be paid this sort of thing sort of thing doesn’t go down too well, maybe next month, so don’t make too much of a fuss about it and fingers crossed for rain. 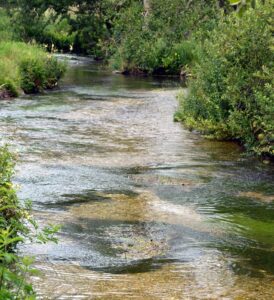 Private Water Companies: Self serving worms and weasels with scant regard for a ground water fed river.

…and hey OFWAT and the Environment Agency feel free to call them to book on the impact of over abstraction at some point.

A position that was picked up by Paxo on Radio 4 (I know, I know) one morning this week when he echoed my sentiments regarding their exploitation of a natural resource for financial gain to the detriment of the aquatic environment. Richard Benyon was also in on the conversation and while he concurred with Paxo’s sentiments his declaration that a few more reservoirs were the answer demonstrated a limited grasp of the situation he is faced with.

You might want to think about this a little longer Richard, and the way we use our groundwater in this parched alley of Albion and I shall be writing to you on the matter in due course.

There have been several articles in the national press about the plight of southern rivers, which is great, but these articles should have appeared six months ago. There are many of us who were shouting as loud as we could throughout a very dry winter. If any paper out there needs an environment correspondent with a reasonable grasp of the environment don’t be a stranger. I’ve lost a few writing gigs of late and have some availability.

Paxo by the way, top banana, I don’t know if I’ve ever mentioned it (I have, I have ) but we once shared a petri dish on an invertebrate sampling course, and I feel a bond was made. 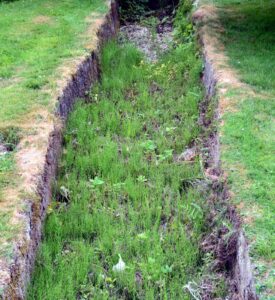 These streams through the Mill house garden increasingly run dry with each summer that passes.

They used to run year round and held fish. 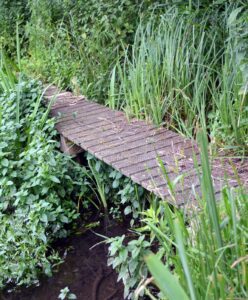 The bed of this bridge (one of my first that I seemed to have constructed six inches lower than it needed to be) is fixed to its bearings because it would regularly lift up and float (once heading off down river) due to verdant weed growth downstream and good flow holding water up. The weed would have to be cut accordingly in June to settle the bed of the bridge back on its bearings. There is no verdant weed growth due to low flow and the water level is fourteen inches below the bed of the bridge. 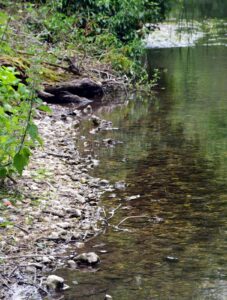 This gravel should not be showing above the water. 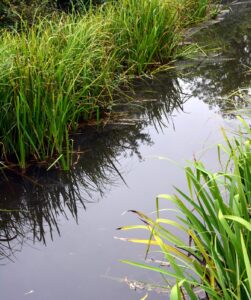 Here’s half way up the Mill Stream. Today it is a still water and has been for a year. It used to flow and contain ranunculus and fishing records will confirm, many fish. 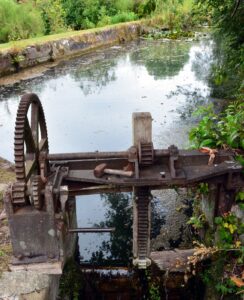 This is the sluice. It was installed some years before Lou Nolan got his guns in a muddle at Balaclava and it still works as intended. It was designed to take an awful lot more water than it does today. That half inch of water spilling over the top is the sum total of the Mill stream’s flow.

Were we still in the milling business there would be a shortage of flour this year. 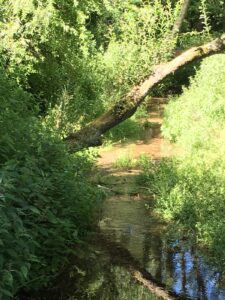 And then there’s the borehole, one here and one at the cricket ground. No fancy graphs, or measuring equipment required. just take the cap off and shine a torch down. The groundwater level is very low and has been since the middle of last summer.

Here ends the case for the impact of over abstraction on the chalk stream environment.

On a lighter note,

Let me put that another way,

There is no lighter note where chalk stream water levels are concerned.

The groundwater resource in the South East of England is being over exploited. There is a gamble being played that aquifers are replenished each winter at a rate that will allow a certain level of abstraction.

This winter we once again lost that gamble,

the signs were obvious early in the year when quiet warnings should have been issued over the use of water instead of peddling the line that groundwater levels were OK when it was clear to many that they were not,

unless the bar for what’s considered OK for groundwater levels has been conveniently lowered. 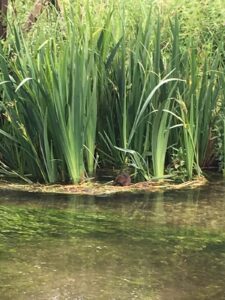 Over seventy percent of the planet’s groundwater fed rivers (chalk streams) are in the UK. Over abstraction is impacting upon a unique aquatic environment and if such a thing were to occur in another country we would be quick to condemn it as corrupt.

Looking up and not down,

Voles, ( I know they don’t fly, but I do find them very soothing)

Are in pretty good health on this stretch of river, here’s one of Ratty going about his business in front of the fishing hut. Apologies for the quality of the photo but it was taken on my clever phone rather than my idiot proof camera. 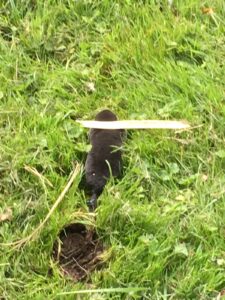 The Wind in the Willows feel to the morning continued as this Mole broke cover just outside the fishing hut, two days before a family of stoats were seen to run across the bridge and for several days we did have a gentle zephyr that did indeed disturb the willows. There was also a toad unfortunately flattened on the road.

There are also many damsel flies, butterflies and Moths but I don’t think they made the cut in Kenneth Grahame’s aquatic opus.

Start typing to see results or hit ESC to close
salmon fly fishing chub roach pike
See all results
More Stories
The Irish Fly Fair 2013
This website uses cookies to improve your experience. We'll assume you're ok with this, but you can opt-out if you wish.Accept Reject Read More
Cookies Policy