Extraordinary footage capturing the fish’s efforts to jump the weir was taken by 18-year-old Oscar Downing, whose father, Anthony, is an environment officer at the Environment Agency. Having heard that there had been sightings of salmon in the river, Oscar thought he would try his luck at getting one on film and only 20 minutes after setting up his camera the fish (shown above in a still from the film) made its appearance.

The presence of salmon at Aldwarke has been made possible by the new hydropower scheme, built and run by Barn Energy, four kilometres downstream at Thrybergh Weir.  Opened in October 2015, the scheme includes a specially designed passage to enable salmon, other fish and eels to swim upstream.

Following the Industrial Revolution, pollution and the introduction of numerous large weirs were both factors in the salmon’s demise in the river. Whilst weirs were necessary for boat traffic and to power industry, they blocked migration routes for fish but due to dramatic improvements in water quality over the last 20 years and the building of a series of fish passes migratory fish such as salmon and sea trout are now able to swim freely as far upstream as Rotherham.

“It’s fantastic to see salmon at Aldwarke, so soon after our new fish passage was opened.  Whilst generating renewable electricity is our number one priority, we also wanted to see salmon safely navigate upstream towards Sheffield.  It’s wonderful that they are now doing so, and we hope that we will see a lot more fish up and down the River Don.”

“2015 has been a fantastic year for South Yorkshire’s rivers with salmon leaping in Rotherham and confirmation of spawning salmon in the River Dearne. Barbel have also begun breeding in the river following an extensive re-stocking programme we carried out between 2007 and 2011.”

The Environment Agency and organisations including the Canal and River Trust, Don Catchment Rivers Trust, Sheffield City Council and Yorkshire Water are currently working on further fish passage and habitat improvement projects that will enable these iconic fish to return to their historic spawning grounds within and upstream of Sheffield. 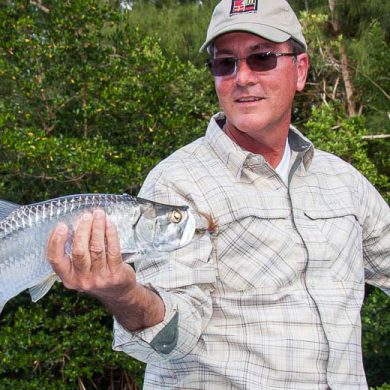 Keep Florida Fishing Invites Anglers to Celebrate National Fishing and Boating Week on June 3-11
This website uses cookies to improve your experience. We'll assume you're ok with this, but you can opt-out if you wish.Accept Reject Read More
Cookies Policy