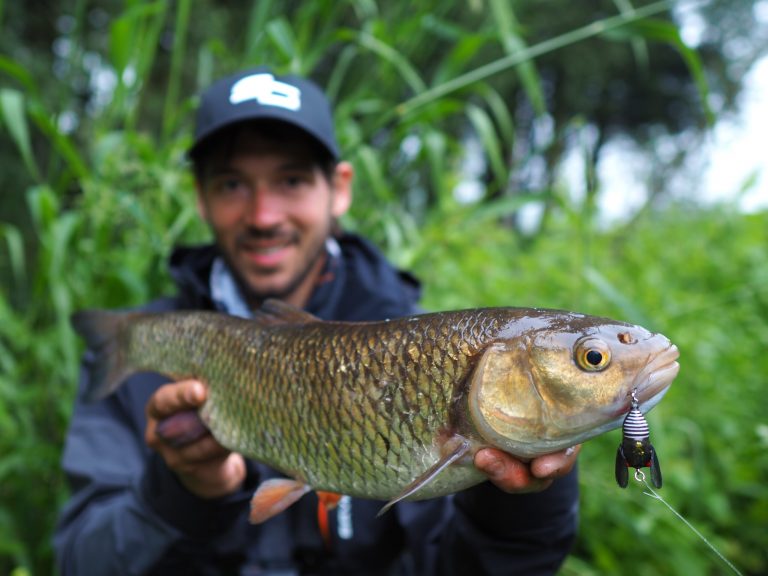 A Start to the Season

June 16th came, and for the first time in years I didn’t fish! The 17th passed by too, and with it the glorious weather. Enter the 18th, my time to shine. Throughout the day we were bombarded with heavy rainfall and awful conditions. Finally, as evening drew in, the rain eased to a fine mist, and I took the opportunity to fish. Clad with waterproofs, I set off, armed with a small handful of lures and a 3-10g spinning rod.

Pleasantly surprised on arrival, the rain had not yet drained into the river, leaving me with perfect clarity. Ideal conditions for topwater lures. The lack of light would make it impossible to spot fish, so covering likely areas would be the best bet.

I rigged up with a 3.3cm black Savage Gear Cicada. I love black surface lures for chub, they stand out exceptionally well against a grey skyline. I made my first cast of the session, placing the lure alongside an overhanging bush. A few twitches of the lure, and I was in. Not the expected chub but a greedy dace. I slipped it back and cast again, a few feet of retrieve and splosh! A greedy chub had engulfed the lure, darting towards cover. I netted the fish, my first chub of the season. Not a monster, at around a pound in weight. Once you’ve pulled a fish from the swim, chub wise up quickly. It was time to move on.

I continued to fish for around an hour, managing a few false takes and some frustrating poor hook holds. This resulted in lost and spooked fish. I was certainly rusty, striking aggressively at any take. Something you just don’t do with chub. It’s best to maintain tension and do a small set as they begin to hook themselves. Eventually, I got the hang of it, and started to fish with a little more accuracy and finesse. I came to a fallen branch, backed up with weed creating a lovely raft. I cast my lure just upstream with a plop, and watched as two chub came racing out to get it.

The larger of the two swiped at the lure and missed it, spooking off, but the smaller fish was still searching. I quickly placed another cast intercepting the chub’s line of sight. It worked, the fish raced towards the lure and grabbed it, hooking up as it began to pull drag. A short thrashy fight followed, and I slipped the net under my first quality chub of the year, probably nudging 4lbs. I slipped the fish back, relieved after some frustratingly bad angling.

I continued on, covering several more likely looking spots without a sign of fish. The light was low and I knew the next 45 minutes would be my best chance of another bite. I picked out a narrow swim where the water was faster, an overhang on either side would provide the perfect home for a chub. I made a few casts upstream without so much as a follow. Then switched and cast one downstream, allowing it to drift under the overhang, before starting my retrieve. I worked the lure with a steady crawl, allowing the wings to rock it from side to side, splashing water as it moved.

Out of the blue the surface exploded with an eruption of water, and the rod hunched around with screaming drag. I was hooked up to a better fish. I used the full curve of the rod, attempting to steer the fish away as it charged for bankside snags. I was unsuccessful. Everything went solid as the fish buried deep in the reeds. I changed the pulling angle several times, and suddenly felt the kicks of a fish on the line. I quickly grabbed the net, intercepting my prize as it made another run for cover. I had netted a quality chub, deep-flanked and broad. I gave it a quick measure at 56cms, probably in the 5s. A quick photograph, and I slipped the fish back, happy with my first session of the season.

The light was almost gone and the rain had picked up. I decided to head back to the car on a high note. Another swim caught my eye. Offering similar conditions to the last one, I had to stop for one last cast. My hunch was correct, and I watched as another nice chub bow-waved towards the lure. I hooked up! Another hard-fighting fish, I managed to keep it clear of the snags and moments later it was in the net, another fine chub nudging 4lbs. A fantastic start to the season. 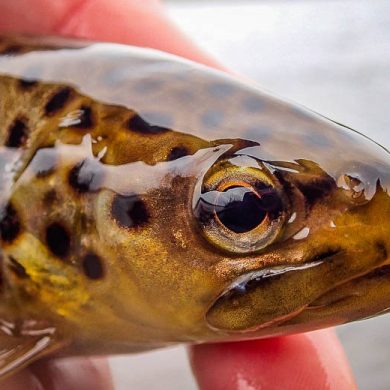 Fly Fishing the Hidden Lochs of the Highlands
This website uses cookies to improve your experience. We'll assume you're ok with this, but you can opt-out if you wish.Accept Reject Read More
Cookies Policy