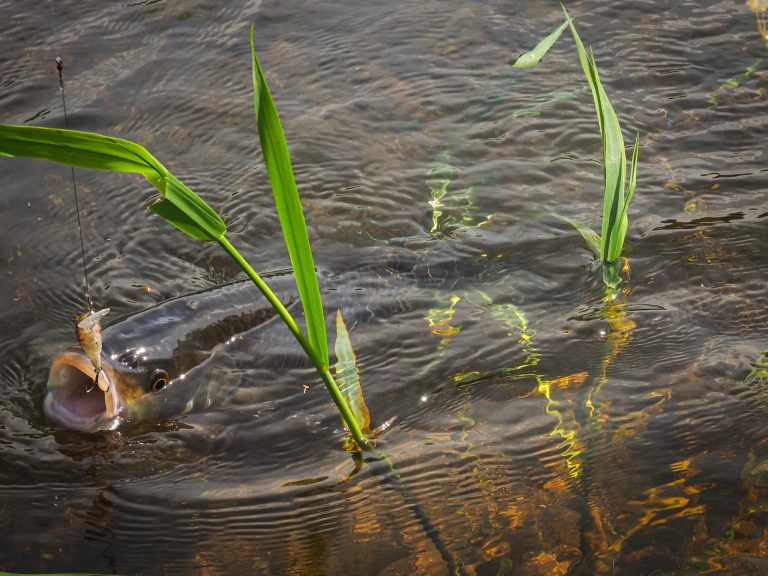 Chub: A Lure and Fly Day

The weekend approached and I couldn’t decide what to target. I had planned on fishing an estuary for bass. However, I received a call from a friend who fancied doing some fishing, I suggested chub. Everson hadn’t caught chub on a lure before, so that would be the target for the evening. I formulated a plan, we would tackle a tricky section of river close to dusk. Everson would lead in with the lures, while any fish he spooked I could cover with the more delicate fly approach, so I was excited to see which tactic would come out on top.

We arrived at the venue with clear indications that it had been a busy day. The swims were well-trampled and the last of the day’s paddlers were packing up. The chub here are used to activity on the water, but it does put them on edge. We moved in to the first swim of the day, where I instantly spotted a group of three sizeable chub. Covering them with both lures and fly, it became clear that they were on edge and not willing to take at the moment. Instead, we spent the next hour brushing up on Everson’s casting skills.

It can be quite difficult to place a tiny 3g lure accurately, inches from an undercut or skimming it under the branches of a tree. The Bow cast is a technique I use often for those tight swims. You simply point the rod towards the feature and load the rod with the lure in your left hand. On release, the natural recoil of the blank will carry the lure. It just takes a little practice to perform it with pin-point accuracy. It’s a cast I use a lot for stalking chub. Minimal movement reduces the risk of spooking fish, and the range is plenty for most small rivers.

With practice over, Everson and I decided to go back to targeting chub. We covered a few more swims and managed a few lazy follows on the lure. I decided to tackle the next few swims on the fly to see if they wanted a little more finesse. I rigged up the 5wt, tied on a large Foam Beetle and got to work. A well-established tree was my target area. Tall and ancient, with branches overhanging far into the river. Chub would definitely be at home here. I watched, waiting for a fish to reveal its position, then made my cast. Plop, two fish emerged to investigate, I stripped a few inches of line, twitching the beetle to grab their attention.

It worked. One fish made a beeline towards it, slowing down, then decided to reject the fly. I quickly cast again, landing in the path of the second fish, who eagerly raced in. The fish slowed on approach. Moments felt like hours as the chub gathered the confidence to make a move. Gulp! The fish was fooled and swallowed the fly. I paused as it turned, then set the hook. A great battle followed, with the fish making jagged runs towards cover. I played the chub hard, keeping it free from snags and weed, and it soon hit the net. A nice fish to start us off. After a swift release I turned to Everson with a grin. “It’s time to get you one!”

Not yet confident with the fly, Everson fished with the surface lure. Using the Bow cast to present to some tight places. No follows from fish, but as we passed a bend in the river I spotted a big chub lying alongside a tree. I instructed Everson to cast upstream of it, and instantly put motion into the lure. Plop, the cast was spot on, and the fish raced towards the sound. Unfortunately, the movement wasn’t there, and the chub sulked away, disappearing out of sight. We moved on to a shallow gravel run where I spotted another lone fish. This time, the cast and movement proved perfect. An explosive take followed, and the fish ran for cover. Despite Everson’s best efforts to keep it from the snags, the battle was lost. The fish had found a weed bed and managed to shed the hook, leaving us with a clump of weed to untangle from.

The excitement of the chase had fully taken hold, and we fished through the next few swims eager for the rush of an adrenaline-fuelled take. As I explored the swim ahead, a chub caught my eye, a quality fish. It was moving around the raft, searching for food mere feet from the bank. I called Everson over and pointed out the chub, blissfully unaware of our presence. He made a cast towards the raft, landing in snags. The chub hadn’t noticed and another opportunity was granted. A careful cast upstream, and the fish moved to hunt. It didn’t see the lure, and patrolled off downstream in search. A few moments later we spotted it moving back towards the raft and cast again.

This time the chub spotted the lure, charging towards it. The fish followed the lure to the bank, with nowhere to go, Everson twitched the lure on the spot mere feet in front of us. Hidden by the reeds the chub hadn’t seen us, and unaware engulfed the lure. As it turned, the hook set and the fish bolted, stripping yards off drag. A powerful fight followed as the chub attempted to reach multiple snags. However, this time the hook held, and I slipped the net under Everson’s first lure-caught chub. Mission accomplished!

I plan on covering fly tactics for chub more in an upcoming blog, alongside some exciting trips planned at the end of this month.