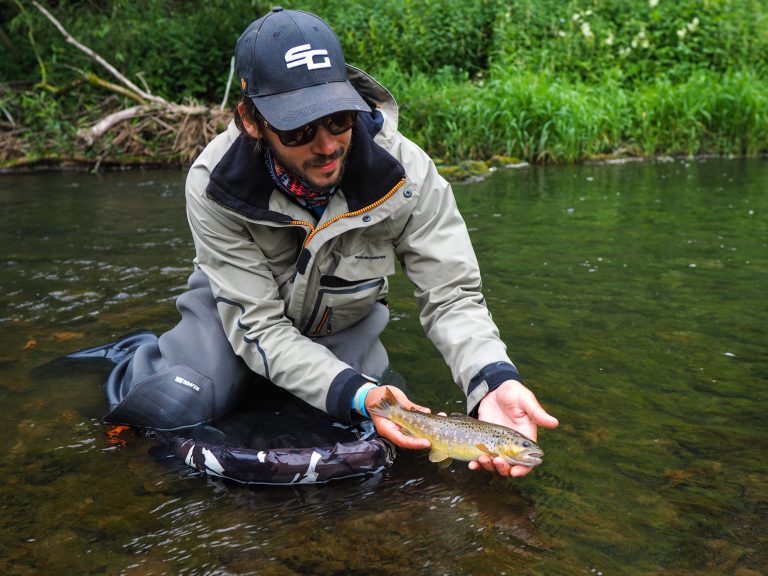 The End of the Road Trip

It was time to leave the South coast and head home. Not directly! Instead, I planned on heading up to Derbyshire to catch up with my good friend Andy Buckley. Andy’s a full-time fly fishing guide, and with a few days off, we planned on breaking his routine and searching out the lowland rivers for big chub. Unfortunately, the unpredictable UK weather systems dampened our plans as severe rain bombarded the region for the next 12 hours, leaving the rivers in a muddy mess.

After the storms passed, we set off to fish the available water. Thankfully, the steep gradient of the Peak District allows the smaller headwaters to rapidly clear, leaving us with plenty of trout fishing. Who better to go with than a Derbyshire angling guide? Andy and I have spent many sessions fishing the middle reaches of rivers like the Dove and Derwent, but with these still pumping through I was keen to try something new.

Andy suggested visiting some of the Peak District’s historic venues. Loved and fished by Izaak Walton and Charles Cotton back in the 1600s. A step back in time, and an opportunity to walk in the footsteps of our angling forefathers. Where better to start our journey than in Wolfscote Dale, intimate close-quarters fly fishing, very close to the famous Cotton/Walton fishing temple built in 1674? A celebration of their friendship, and a rather fitting place for two chums to catch up after many months.

Wolfscote Dale delivered! Beautiful sheer valley with turbulent rapids and falls, which paved way to deep riffles and long glossy flats. The trout blend seamlessly into their surroundings, and adopt brilliant bright spots and slate grey backs, making them difficult to spot. Andy and I fished through the glossy flats with the dry fly, and snuck into the deeper riffles with a stealthy French leader approach.

It wasn’t long until we put a few trout in the net with the odd bonus grayling. The most memorable for me being a black-backed, yet vibrant-flanked brownie that was living in a particularly dark pool. With the Dove ticked off, it was time to fish our next venue. One I’ve wanted to fish for a while.

The Lathkill is a limestone river with impossibly clear water, so much so that without a ripple of wind it doesn’t look like water at all. Charles Cotton described the river as so, “the purest and most transparent stream that I ever yet saw… and breeds, it is said, the reddest and the best trouts in England”. And with a testimonial like that, I was more than eager to get started.

The outstanding clarity of the Lathkill really proved true, and the number of trout overwhelming. It was difficult to approach the bigger fish in each pool without spooking a smaller trout, setting off a chain reaction, and ruining the swim. The downside to bright sunlight and crystal clear waters.

Despite the challenges, we rose plenty of smaller fish, then set off to look for a larger target. The opportunity arose as Andy and I both spotted quality trout. Creeping through the cover it wasn’t long until I stalked a beautiful brown on the dry fly, as Andy hooked up with a fish of his own. The Lathkill browns really were beautiful, with the bluest backs I’ve ever seen on a trout. Mission accomplished, it was time to head to the Wye.

With just a few hours to spare we arrived at the Wye. The only river in the country with a naturally spawning population of rainbow trout. It was these rainbows I had come for, having had a taste of some big ones on past trips, I was keen to feel the immense fight again.

I found myself side-tracked by a big brown trout for nearly an hour, hidden tight in overhanging branches. It was a tough fish to move, and aside from a few glances at the fly it wouldn’t budge. The inevitable eventually happened, I spooked the fish. Time to move on.

The next 45 minutes, a learning curve. I had insisted on fishing with 4lb tippet to ensure I could target and land a bigger fish. Instead, I managed to spook and place poor drifts over every rising fish during the spinner fall. Meanwhile Andy fished with his recommended 2.5lb tippet, achieving perfect presentation and absolutely destroying me. He was like a machine landing trout after trout, and while I was perhaps a little frustrated, I came away from the swim having learnt a valuable lesson about fly presentation.

I was keen to go back and target some big trout I had seen earlier, and Andy was curious to give it a go. Almost dark at this point, we couldn’t pick the fish, but instead ran blind casts over the spinner sippers. I would fish, while Andy crouched down in the swim waiting to spot a subtle rise in the darkness. Strike! Andy watched a fish take the fly, and I set the hooks into a very big trout.

Insanely strong, the battle raged on as I followed the fish up and down the bank as it ran, thankful of my 4lb tippet choice. After some time it finally tired and hit the net. Not the monster wild rainbow we were after, but a huge holdover brown, one of the most exciting fights I’ve had to date. We slipped the fish back, now in total darkness, and returned home. A great final session of my fishing road trip. 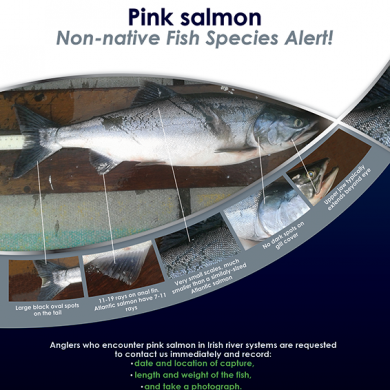 Arrival of Non-Native Pink Salmon in Ireland Causes Unease
This website uses cookies to improve your experience. We'll assume you're ok with this, but you can opt-out if you wish.Accept Reject Read More
Cookies Policy