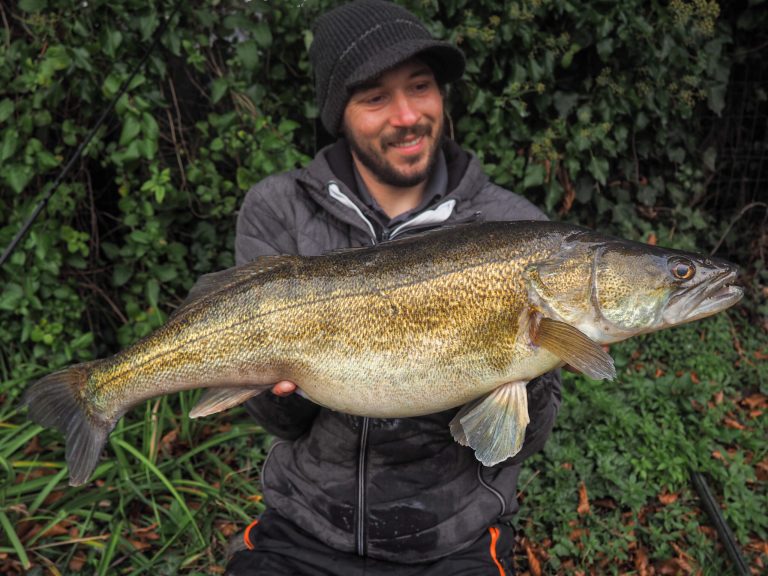 My Fenland lure-caught double. A fish I wasn’t sure I’d tick off the list
Robbie Northman

We’re back at that time of year where the days seem unsettlingly short. Light at seven, dark at four. All too often difficult to juggle fishing alongside many other commitments. Weekends on the bank seem busier than ever, difficult to find that peace and quiet. I often find release by fishing at night. Perch and pike will feed long into darkness, particularly in areas with artificial light, clear water, or heavy angling pressure. There’s one species that consistently feeds through darkness… zander.

Zander are a species I began to target more over past years. Aside from the odd reservoir session, I only dabbled in zander fishing. After catching a few big ones on the reservoirs, I set my sights on a Fenland double. It was a journey across countless venues through varying conditions, but I managed to achieve my goal with some great back-up fish. I was keen to return the following season, then Covid happened! As my nearest zander fix was over an hour’s drive away, I was unable to fish for them and placed them in the back of my mind.

With the beginning of the week’s weather still consistent and low air pressure, I decided to head out and meet some friends for a social session. With the guys at work through the day, night fishing would be the only way to catch up. What better a way to do it than zander fishing? We fished casually, chatting away, casting in the darkness, deciding to work a specific area in the hopes they’d switch on. It wasn’t long before a few small ones made an appearance, falling for small paddle tail shads. The action was slow and the bites very finicky, although conditions felt good for a quality stamp of fish.

Suddenly, I watched my friend’s rod lunge over as a decent fish hit the lure, shaking its head for a few moments before dropping off. He had struck hard, but unlucky, left with a single puncture on the lure and kinked fluorocarbon. No doubt a sizeable zander. We continued fishing, working our way through the lure colours to find what they wanted. I had been fishing natural, but chose to switch over to a white 7cm shad. I worked the lure through the darkness with twitchy vertical pops of the rod tip and controlled drops. Often zander will hit the lure as it sinks, so I try to maintain good contact.

Sure enough, as the lure dropped through the water I felt a faint tap through the rod and set the hook. As the fish kicked and thrashed in the current, I was certain it was zander. The tell-tail shakes and short runs gave it away long before it emerged thrashing at the surface. After my best attempts at knocking the fish off while disorientated in the darkness, it was finally in the net. My first quality zander in over a year. Wow, it felt good to get off the mark on this fascinating species again. I slipped the fish back, enjoying the release through torchlight, happy to end my session, eager to return and try again.

A CHANGE IN CONDITIONS

I was joined by Stuart and Matt for some lure fishing on the Broads. Stuart visits every year, but for Matt it would be the first time. Stuart has some tough-to-beat PBs, while Matt, being new to lure fishing, was in with a real shot at breaking his. The conditions were going to be tough, crystal-clear water and a sudden shift from very low to very high air pressure. This can really kill the bite. Despite the odds being stacked against us, the perch hunt began.

We covered two river systems in search of stripes, finding an unusual amount of small jacks on the feed. These crafty devils are great at giving you the illusion of a giant perch, up until that tell-tale cucumber shape appears. Great action none the less, with Matt managing his PB pike after spending some time with the larger lures. The perch were seemingly planted hard on the deck and amongst structure, unwilling to feed in any great numbers. We persevered with an array of tactics from shads, creature baits, ned rigs etc.

As the light began to fade the action increased, and we made the decision to move to a new area in search of a better stamp. Half a dozen casts later Matt was in, creeping a ned rig along the bottom with long pauses. This produced a much more positive bite. A powerful fish stayed deep, making short runs around the boat, much like those crafty small pike, but the fast head bumps made us certain it was a perch. I readied myself with the net as a striped flank broke the surface. A quality 40cms 2lb 7oz perch was landed – Matt’s new PB. Certainly a memorable trip.

Next week I’m jumping out of my element to try something new, I’m excited to write about the experience in what will hopefully be an action-packed blog.

Start typing to see results or hit ESC to close
salmon fly fishing chub roach pike
See all results
More Stories
The Seychelles Fisheries Open
This website uses cookies to improve your experience. We'll assume you're ok with this, but you can opt-out if you wish.Accept Reject Read More
Cookies Policy