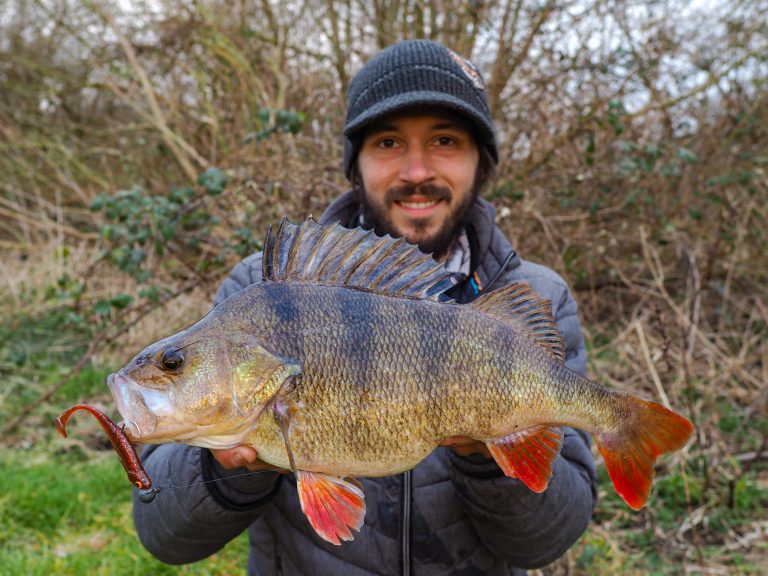 Here we are, the end of our 2020-21 coarse fishing season, and what an ending it’s been. The final week of the season for me has been spent in pursuit of specimen perch. This time of year, with water temperatures warming, the perch can have other things on their mind. In just a few weeks they will be ready to spawn. This can result in either very easy or incredibly hard fishing. If you’re not in the zone you often won’t catch. So, with this in mind, I’ve spent a lot of time searching the river with sonar, looking for shoals of fish moving to their preferred spawning grounds. I think this is a process that takes place over weeks, with fish gradually moving from feeding area to feeding area en route to the final stop.

I recently took delivery of some new Savage Gear lures, a range called the Craft Shad which will be released next month. Liking the look of them, I  placed one of each size and colour in my bag and forgot about them. A few weeks had passed and I set off for a quick evening session, hoping to locate a perch or two. Arriving at the swim in nice conditions I was very hopeful. The air pressure was moderate and the day had a warm muggy feel about it, with patchy cloud cover masking the sun. Perfect. I rigged up with my Gravity Twitch and a ned rig and worked around the area for a solid two hours. The action was great, but with the wrong species. It was two hours of endless jack pike action. I had around nine, losing a few others, not one was over 4lb. After clearing the area of pike, I sat back thinking about my strategy. I probably had an hour and a half left until dusk, the sun had crept out a little, giving the evening a beautiful glow. I decided to try one of the new Craft Shads in a 10cm size. I chose a colour that would really amplify the light and trigger an active predator. A few casts later I had a pike barely 2lb, I slipped it back and cast over the same area. Whack! I was in again, this one felt very different, head-shaking and trying to stay deep. I knew it could be a perch, and if it was it was huge. I dialled the drag back a couple more clicks for safe measure and readied the net. The fish was under the rod tip at this point and I had yet to see it. I was confident it wasn’t a pike now. I guided the fish towards the surface and was met with the sight of a colossal chunk of perch flank. I took an attempt with the net, spooking the fish, causing it to perform another agonizing run. Second time round my net didn’t miss, and I stood there shocked for a moment at the sight of a truly magnificent Broadland perch. I had banked my first 4 last winter and this fish certainly equalled it. It’s a very rare stamp of perch here with 3s being a magnificent catch in their own right. But I never expected another 4, although there’s always potential for them to reach such a size. I readied the scale and was thrilled at a weight of 4lb 3oz! I’d beaten my PB by an oz. A magnificent fish which, despite its size and age, was as fin-perfect as possible. I slipped the fish back, taking in the moment of release, and almost collapsed with joy. A magnificent perch from a wild waterway. I was done for the day, content in sitting back and watching the sun set.

Micro targets, I’m sure we all have them. Biggest on a float, biggest on a feeder. I like doing it with lures. It encourages me to try other methods. Crankbait fishing has made up a huge part of my angling this year. For years my best perch on a hard bait stood at 2lb 12oz. I’ve beaten that many times now.

I returned for a dusk session in an area I had scanned fish earlier in the week. I had caught here before, tempting a few perch on the modified Goby Crank I used in an earlier blog. The day had been hot and bright, so I arrived at the venue as the sun was setting for a quick hour session. I covered a bit of ground, tempting a handful of small perch. They wanted it slow that evening, cast tight to cover, allowed to sink to the deck, and retrieved just a few inches at a time. I was retrieving the lure when it stopped. I felt a weight similar to catching the bottom. The bottom started kicking and I knew instantly I had a perch, just a very delicate take. The fight was much less adrenaline-fuelled than the battle with my PB, I was in total control as the fish plodded away under the rod tip. The excitement kicked in once I netted my prize. A beautifully proportioned perch, long, deep, and wide. This one’s definitely a good 3, I thought to myself while grabbing the scales, possibly my biggest on a hard lure. At 3lb 8oz it had topped my previous hard lure best by another few ounces. At this point darkness had crept in and I released my catch, ending the session with a huge grin on my face.

I’m writing this blog with one river session left, but for me this season’s complete. Over the next couple of blogs, I plan on explaining tactics and techniques in a little more depth. Before moving on to my next lure target, which I’ll reveal very soon…

I managed to get out for one final go on rivers. I set out at first light, aiming for a big day on the boat. Winds up to 50mph battered me, making it difficult to fish. By mid-morning I had covered water relentlessly, without so much as a bite. I made the decision to look for some calmer areas, seeking relief as much as fish at this point. It all happened in an instant. I scanned a shoal of perch on the sonar and anchored up. Moments later I was into my first perch of the day, a scraper 2 maybe. I was happy to end the blank. I cast the shad out again, feeling the faintest bite on retrieve. I struck in to a heavy fish, unmistakably a perch. Minutes later a huge perch broke the surface, possibly the fattest I’ve seen. The stunning perch weighed in at 4lb 1oz, a truly great fish and my 3rd wild 4lber. The bites dried up after and the rest of the day produced no bites. I was thrilled to end the season in such a special way. 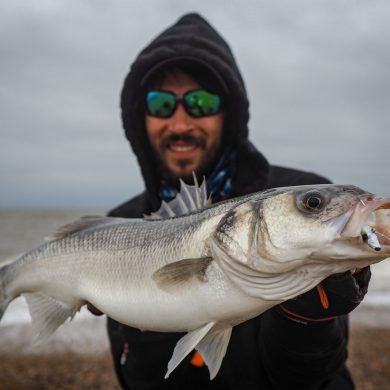