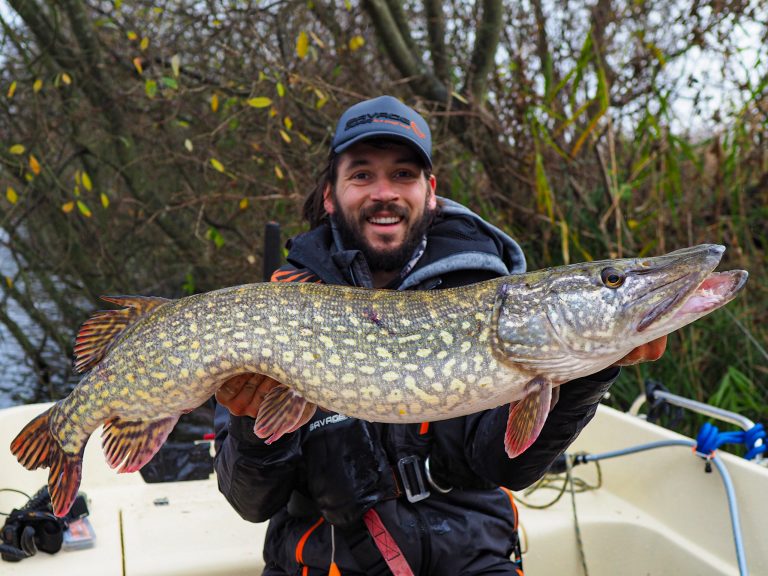 This past week we’ve endured rain, rain, and yet more rain. Despite having to put on wellies in order to reach the boat, I managed to get out on the water during calmer spells for a few short sessions. The variation in conditions this week proved interesting, with different styles of lure and tactics working on different days. Although not every session resulted in big fish, the numbers have certainly been good on those small stamp days, perhaps the recent influx of cold water is finally beginning to make them shoal. It does generally get better from this point of the winter on.

Armed with confidence and a score to settle after a tough weekend at Lathams, I arrived at the shed to retrieve the boat. I hadn’t quite realized how high the river was! The jetty was well underwater, and my boat shoes wouldn’t help. So after the short delay I finally made it on water at around mid-day. I motored over to the first spot, certain I would find fish and get off the mark quickly. That was not the case. After 40 minutes searching water with suspending jerk baits, I was yet to get a bite. I swapped over to a crayfish on the Jika rig and decided to search back over the water. Aside from a few tentative taps and pulls on the claws I didn’t land a fish.

I decided to scale down further, rigging up my 2-10g Ultralight set-up. I dropped down to 7lb fluorocarbon and tied on a small prototype plastic. This little lure comes out later this month, and has already been a banker for good perch. At just two inches in length and very realistic, it’s been a winner on tough days. I rigged the lure up on a 3g head and proceeded to work it around the swim. Big vertical hops and long drops with extended pauses, I wanted the lure to be visible falling through the water column while being slow enough for lethargic fish.

Hop, drop, bang! While the lure was sinking, I felt a solid tap and set the hook, realizing instantly I was in trouble. Drag screamed on the reel and the braid sung in the wind, I knew instantly this was a pike. No wonder the perch weren’t feeding! I kept the drag light and rod movements subtle, knowing I was on totally underclassed kit. The pike quickly turned, swimming toward me, before bolting off on another screaming run at the boat. I managed a quick glimpse at a fish, easily mid-doubles.

Trying to maintain composure I once again eased the fish towards the boat, working it to the surface. It caught sight of the net and bolted, water erupting as the fish turned. Observing a shorter run, I tightened the drag and manoeuvred the fish towards the boat, net at the ready. She spotted me again but it was too late, in position I blocked the pike’s path and it swam reluctantly into the net. A cracking fish at bang on a metre and around 17lbs. Not the intended target, but I was happy. After releasing the fish, I continued on my perch hunt, fishing was difficult. I managed very few bites, tempting a handful of small fish before moving on.

I arrived at another likely location, this time starting with the small lure that had gotten bites throughout the day. Fanning my casts around the swim for twenty minutes or so, I was still without a bite. I decided to switch tactics, running some crankbaits and jerks through the area. This time I had a follow from a smaller pike around 8lb or so, but still no committed takes. I should have bought the pike kit. I made one final change, certain fish would be in the area. This time I set up a 9cm Reaction Cray on a very light Jika rig. I planned on fishing quite aggressively, hoping the large flapping claws would trigger a reaction.

A few minutes later I felt a thud on the drop and set the hook, instantly feeling the tell-tale head shakes of a perch as it ran back to the depths. This one was a powerful fish, non-stop diving to the bottom as the rod hunched over. Eventually I eased the fish to the surface, netting my prize. A great fish of 40cms that I left un-weighed. I continued on with my session, as darkness drew closer the bites began to tail off. The recent trend of last-minute fish had come to an end.

I often wonder what makes fish alternate between low light feeding and daytime feeding. Certainly, with perch I’ve observed that in periods of cold water with freezing nights they seem ready to feed in daylight. While when the water’s clear or temperatures are consistent, they become most confident at dusk. Of course, they can feed at any time in between. Yet another mystery to ponder in the quest to understand more about predator fishing. 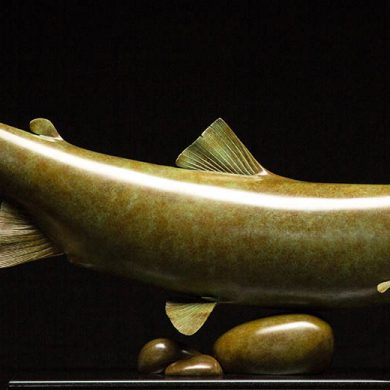