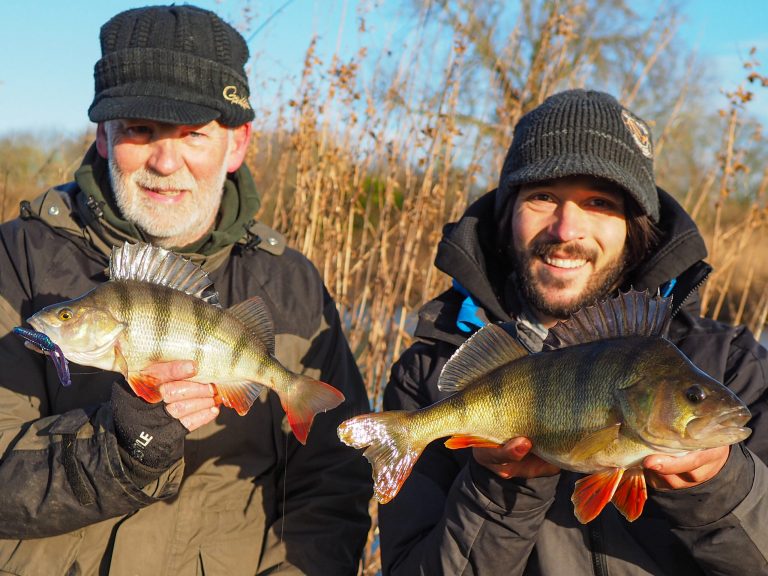 Another busy week and one very interesting session, this time I decided to pay a visit to my friend Mark Murdoch from SPRO. The plan, to explore a few new waterways and drop by a few faithful spots on the way.

I gulped down a coffee and loaded the car in darkness. A 5:30am start for me, and a fair drive to arrive at this spot at first light. Previous nights had dropped cold with heavy frost, today looked kinder on the hands. I stopped for yet another coffee and clocked the temperature at 3ºC, while still dark, maybe I wouldn’t need all five layers. Arriving at just after 8:00am it was still cold, but with the cloud due to disperse and sunlight breaking through it would quickly turn into a glorious day.

The morning’s fishing was slow, moving swim to swim we combed through every piece of fishable water. Mark fished dropshot and Carolina rig while I fished dropshot and ned rig. Two hours passed without a bite, the sun now high and bathing the reed banks with a golden glow. The temperature rose above 5ºC and the river flowed strong with remaining flood water. This confined our fishing to slacks and structure. Sometimes a nuisance, sometimes a blessing, as floodwater recedes often the fish remain tightly shoaled.

As the heat intensified after such a cold spell, I felt confident of a bite. I could scale down and increase my chances, but I chose to stick with larger lures. After changing patterns a few times, I pulled my favourite Reaction Crayfish from the box, rigging it up on the dropshot. I cast upstream to an area with less intense flow and began my retrieve, small wiggles and long static pauses, maximising my time in the most productive zones.

Bang! While the lure lay static the braid jolted and the tip slammed around. I set the hook, instantly feeling the unmistakable head shakes of a quality perch. I coaxed the fish towards me, the rod under full load. Suddenly it awakened, making a short run back towards the flow before rolling on the surface in the current, a nerve-wracking moment for any angler. I guided the fish towards the edge and calmer water as it thrashed angrily on the surface, finally content as it hit the net. This was one of the meanest, angriest and most stunning perch I’ve caught in a while. A solid mid-2 at a guess, the weight wasn’t important but imagine this one at 4lbs!

Meanwhile, Mark stuck it out on the Carolina rig, confident that it suited his swim better. Sure enough, while I was setting up the camera, I glanced around to see him into a fish of his own. A smaller perch around a pound or so, but very welcome at this point. We continued on for another thirty minutes, both of us hooking a few more fish on our separate tactics, the Carolina rig stole the show producing far more bites on this day.

Mark called out again, this time hooked up to a better fish! I dashed over to give him a hand, spotting a powerful perch diving towards the cover of a reed bed. As he eased the perch free from the weeds I prepared the net, landing his best fish of the day, 38cms and around the 2lbs mark. A lovely fish to finish on at this venue, with many more spots to recce throughout the day.

The dropshot once again produced the best fish of our morning’s session, but the Carolina produced more action. Could it be down to lure differences, the different swims, or just a better choice of rig on that day? Either way, the Carolina is a handy rig to add to the armoury, often producing bites where other rigs fail. Its advantage is the drop time of the lure and ability to fish heavier weights. I’ll explain a little about how we rig and fish with the Carolina rig.

Making a Carolina rig is simple. I like to use a length of fluorocarbon for abrasion resistance, putting a small stopper on first, then a cone weight second. You can add a bead for sound if you like, then you use a small swivel or clip, followed by your hook length. The distance between the weight and hook can vary greatly from a few inches to as many feet as you can cast. You decide, based on the venue depth, flow, bottom topography, and required drop time to suit the fish’s mood.

Offset hooks with weedless creature baits or worm patterns work great, but some shads and flukes perform well with the tactic too. Getting the lure close to neutrally buoyant works a treat. When retrieving you can hop the lead, drag it or both. Vary the pause times, quick pauses will keep the rig suspended, while slowing it down will allow for a very long natural drop. Hops and long pauses with a leader length of about 15 inches proved the most productive for Mark on that day.