Thirty years ago the once-prolific runs began to decline. Now, after 20 years of failed efforts to help nature restore the salmon numbers,  the remaining professional salmon fishermen have decided to hang up their nets.

For the last two decades the few salmon that still make it back to the two rivers have enjoyed complete protection. The rod fishermen and the commercial boatmen have carefully returned every salmon they caught in the hope that natural spawning and concerted efforts to improve the habitats would rebuild the runs. But the future of the salmon populations of both rivers remains officially designated as being “At Risk.”

In addition to the research and conservation projects  that have been employed the Environment Agency has maintained a net limitation order for many years and the two remaining boatmen have helped the researchers and co-operated with every restraint suggested to them.  But nothing has really worked so far.

The order restricting the number of nets is now being renewed and negotiations began to bring the ancient fishery to a complete end. This has now resulted in a voluntary buyout of the netting rights funded by a partnership between the Agency, the North Atlantic Salmon Fund (NASF) and the Avon and Stour Rivers Association. The netsmen will receive  * mutually agreed compensation. Supporters of NASF, guided by salmon conservationist, Brian Marshall,  are contributing 50% of the money through the Migratory Salmon Foundation, a UK conservation charity. The Agency provided 25% on and the Avon and Stour Rivers Association contributed the remainder.

Climate changes affecting ocean currents and the abundance of the prey species that salmon feed on during their long oceanic migrations have been blamed for a steep and general decline in wild Atlantic salmon numbers on both sides of the North Atlantic. There are possible signs of a tentative improvement in many rivers.  Iceland, for example, has enjoyed record salmon catches recently. But the Avon and the Stour and the Wye, and other UK rivers that like them was once world-famous for the quality of its salmon fishing, seem to have lost their capacity to restore themselves naturally.  They share this unenviable distinction with many Atlantic salmon rivers in New England and Canada.

International salmon campaigner Orri Vigfusson, chairman of both NASF and the Migratory Salmon Foundation, said: “In agreeing to surrender their netting rights, in perpetuity, the Mudeford netsmen have demonstrated their great concern for the species. I congratulate all concerned for their continuing determination to improve the situation.  Our participation is another example of our efforts to return Atlantic salmon numbers to their former abundance. With the help of our partner organisations about 90% of the commercial salmon fisheries that were standing in the way of a recovery has been removed.”

The North Atlantic Salmon Fund, NASF,  is an international coalition of voluntary private sector conservation groups who have come together to restore stocks of wild Atlantic salmon to their historic abundance. – nasf@vortex.is – www.nasfworldwide.com
(Orri Vigfusson tel: +354 893 3553) 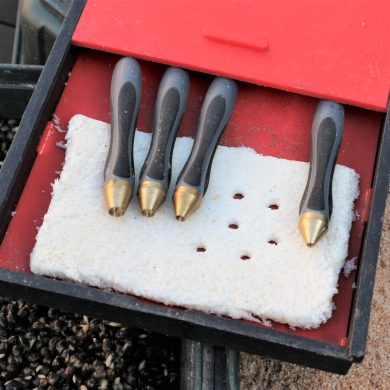