With many of Ireland’s best salmon rivers entering the ocean on Ireland’s west coast, they are very concerned for the future health of the salmon runs in Ireland. In addition to the concern about escapes and interbreeding, there is great apprehension regarding the impact of sea lice on both Atlantic salmon and sea trout.

The development is planned for a site a few kilometres from Inis Oírr, also called Inisheer, an island treasured for its biology and archeological heritage. The plan calls for an annual production of 15,000 tonnes of salmon. On its own, this salmon farm will more than double Ireland’s present production of marine open net pen farmed salmon. However, this may be just the beginning, as there has been discussion of increasing Ireland’s open net pen salmon farming to 150,000 tonnes in time.

Western Europe presently has a far greater problem with sea lice than does Atlantic Canada, and environmental groups fear the impact of this massive new salmon farm. A study published last year showed that sea lice in Ireland are responsible for 39% of deaths among young salmon at sea.

While Ireland’s Sea Fisheries Board is strongly supporting the giant salmon farm, The Government’s Inland Fisheries Ireland strongly opposes it, looking with great alarm at the impact the farm is likely to bring to the economically important salmon runs.

A large number of non-governmental organizations, fisheries organizations, and other citizen groups, plus many citizens at large are also strongly opposing this proposed development . These groups include every large Irish salmon conservation NGO, plus groups that include Friends of the Irish Environment. Among the leaders, Salmon Watch Ireland keeps an up to date site on developments HERE 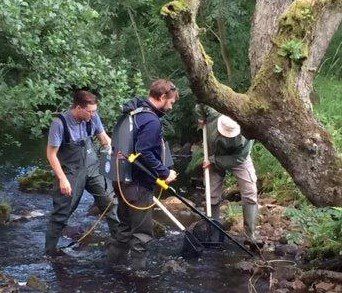