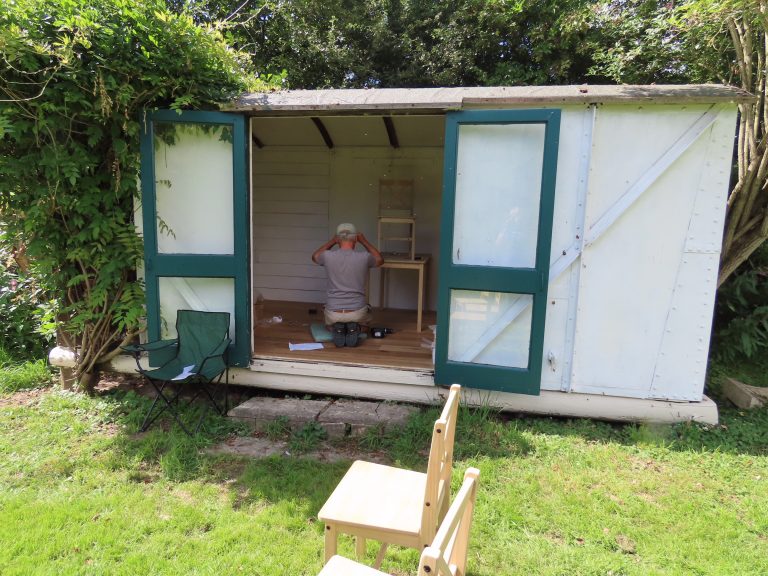 Passion for Barbel… On the Fly (Part 2)

I had promised more news on my adventure for more barbel on fly, picking up on my trials back in the Nineties, but it’s been a week of conflicting commitments and I’m no further forward. Not quite right! I did receive a selection of Czech barbel flies from my old and valued friend Franta, my guide a quarter of a century ago who first gave me the taste for this quest.

These are as yet unused, and even not photographed, as I left them on the table of the Wye hut we have as a group been busy restoring. And that is one reason I have had restricted fishing time. Ian arrived from Surrey with a carload of flooring that between us (90% him) we had to lay. Delivered next was a consignment of flat-pack table and chairs that we laboured to assemble… or at least Ian did.

Now the whole thing looks very IKEA, but that has not helped Bailey’s Barbel Progress, and for that I apologise. We still have a long way to go before said hut measures up to the beauties I witnessed on the Tyne and Eden a week or so ago, but a start has to be made somewhere.

Personally, I especially like photos of past successes on a hut wall, and whilst I’d like to think we might catch fish of our own, I’d love a few black and whites of Wye salmon from back in the days of its pomp. Anyone know where I could locate a few? Junk shops, I suppose? Antique emporiums? Car boots? Thomas Turner?!

Back to Norfolk news now. The great Olly Shepherd of Fly Fishing Yorkshire emailed me the other day from my old county where he was on holiday. Olly, of course, was my right-hand man on the Mortimer and Whitehouse Xmas special last year, and I’m happy to say we have not lost touch. But to the point!

Stopping at a coastal road bridge, Olly looked over as all anglers do… and saw a sea trout he put at 15 pounds plus!! He added it was bright silver and straight from the salt. Now, I’m not dreaming of revealing locations, as great mate Robbie Northman is mounting a sea trout campaign as I write, but the sighting is awesome from so many angles.

Personally, I’m so exonerated by this. Back between 1969 and 1974, I caught many sea trout from the North Norfolk coastal area, and many were big. Really big. My diaries show I had over twenty “doubles” up to a monster of 17! Of course, all this was way before I had any thought of buying a camera, and no visual evidence exists of these fish. My mother took a couple of snaps of fish being brought home for her legendary dinner parties, but she died a few years after, and pretty much everything belonging to my parents has been scattered to the winds. How do these things happen, I ask myself?

Those were the days, I had just so much time. Those mammoth Uni summer vacations, eh? Did we realise what we had then? I could stay all night if the tides were right, or get up at 3.00am to be ready for the first of the dawn. A rising sun and a flowing tide I remember as even better than a tide creeping in at dusk, though they gave me my biggest fish. Out of a hundred or so fish, perhaps twenty five were fly-caught, if I’m honest, with the rest on spinner, worm or fish bait. I’d like the percentages to be reversed, but I was a hunter then, and to hook a big sea trout on any gear was a thrill beyond compare.

The belief then was that Norfolk fish were summer visitors from the North East, especially the Tweed region, and that they came South to profit from rich, shallow sea feeding in the warm months. Perhaps, but I did witness these fish spawning in at least two Norfolk rivers come late autumn, so I have never been exactly sure.

But Olly’s sighting has proved that these fish still exist half a century on, and I find that supremely exciting. A twelve pound sea trout on the fly or a twelve pound barbel? Which would I prefer today? It’s such a close thing. I’ll end by saying I hope Robbie catches the former, and I’ll settle for the latter. Wouldn’t that be a brace and a half!

Start typing to see results or hit ESC to close
salmon fly fishing chub roach pike
See all results
More Stories
Secrets of the international fishing agent
This website uses cookies to improve your experience. We'll assume you're ok with this, but you can opt-out if you wish.Accept Reject Read More
Cookies Policy