Postal Problems and Difficulties with the Duchess of Cambridge

Stop right there festive Freddie as it’s still many weeks away and it has long been a tradition in this house not to consider a modicum of tinsel until the business of the BBC Sports Personality of the Year has been attended to. I know some look to the heavens for guidance as to when to put the tree up and to the good book for a date to topple the thing but in this house the state TV channel’s annual gong giving has always served as a marker for the opening skirmishes of Yuletide.

Only this year we have had to go early.

Not due to capitulation in the face of a relentless campaign by retail and media to get festivities underway sometime in September, but because the final day for sending stuff to Child B in Australia in order for it to arrive in time for Jesus’s birthday is December the 9th, which is one day before Gary Lineker and Clare Balding dish out the gongs.

And it grates a tad.

As does the long list of things that we are unable to send to the Antipodes. I find shopping hard enough and normally once what I consider to be the ideal gift has been sourced a purchase is quickly made before doubt can set in. Of course this hasn’t always gone well and can go a bit meatloaf (two out of three ain’t bad) but when a list of prohibited items is introduced the process becomes even more complicated.

Ok dogs continue to be a controversial choice when it comes to Christmas, they are for life after all and quite rightly this festive rule holds when sending gifts to Australia. But it is not just a dog that the Australian’s balk at receiving through the post. Erasers are out, so the stationary set was returned to the store and try the following for size:

“The importation of written matter relating to goods that purport to be for therapeutic purposes and containing any statements or claims that are misleading , false or extravagant ”

Online analytics demonstrate that this house has a small band of followers in Oz who, judging by the previous statement, may well be in jeopardy.

Used or second hand bedding is a no no, paint brushes are out as are wooden clogs, chocolate is discouraged and locomotives are more than frowned upon.

All of which may/may not have featured on prospective presents for Child B had he been back in Old Albion.

Christmas shopping seems to have become complicated quite early this winter.

Playing Grade cricket for South Yarra recently, Child B bust his best bat in the nets. With the second day of a league game with Flemington imminent and his second best bat summoned from the bag, he made efforts to source another bat for backup.

Unfortunately a bat of equivalent quality in Australia is twice the price it is in the UK, so it was on the email to the chap up the road who has made Child B’s bats for some years (Chase cricket – if you’ve a requirement for a bespoke bat give Dan a call) who is aware of his requirements. A new bat is now winging its way around the world for several hundred dollars less than a bat of equal quality in the Antipodes. It’s common practice apparently and hey Theresa, when discussion over trade deals comes up with Oz it might be worth mentioning English Willow (not the Crack variety, although with The Ashes in mind a few phoney bats made from crack willow may not be a bad idea) as they can’t get enough of a beautiful British bat on the other side of the world, they’ll stick those sponsor labels on any bat. A Kookaburra sticker on an Aussie pro’s bat doesn’t mean that the bat was made in the Kookaburra factory. 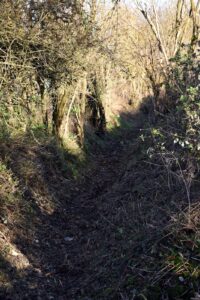 Here’s one of a recently cleared out spring ditch that has remained dry for the last three winters.

This valley and its aquifers now need rain, so come on Madam Water Cycle and all you weather gods, it’s time to turn the taps on. There are spring ditches in this parish staring at a fourth consecutive year of redundancy.

I won’t go on, but can we all agree that if it rains a lot in the South East of England in the next few months it will be a blessing and not the apocalypse that many in the media would have us believe.

While we’re on the much diminished aquifers and over exploited groundwater supply, it was recently reported by OFWAT that there are numerous basic errors in the reporting of data by both Southern Water and Thames Valley Water.

“The trouble is the system incentivises water companies to report better data rather than improve performance, said David Hall, professor at Greenwich University. The reliance on self reporting also extends to information on water leaks and sewage. Thames Water is responsible for self monitoring the amount of sewage it pours into the Thames but only reports 61% of the actual volume according to the EA”

Here’s the link to the BBC report on the weasels that are water companies and their dodgy data. 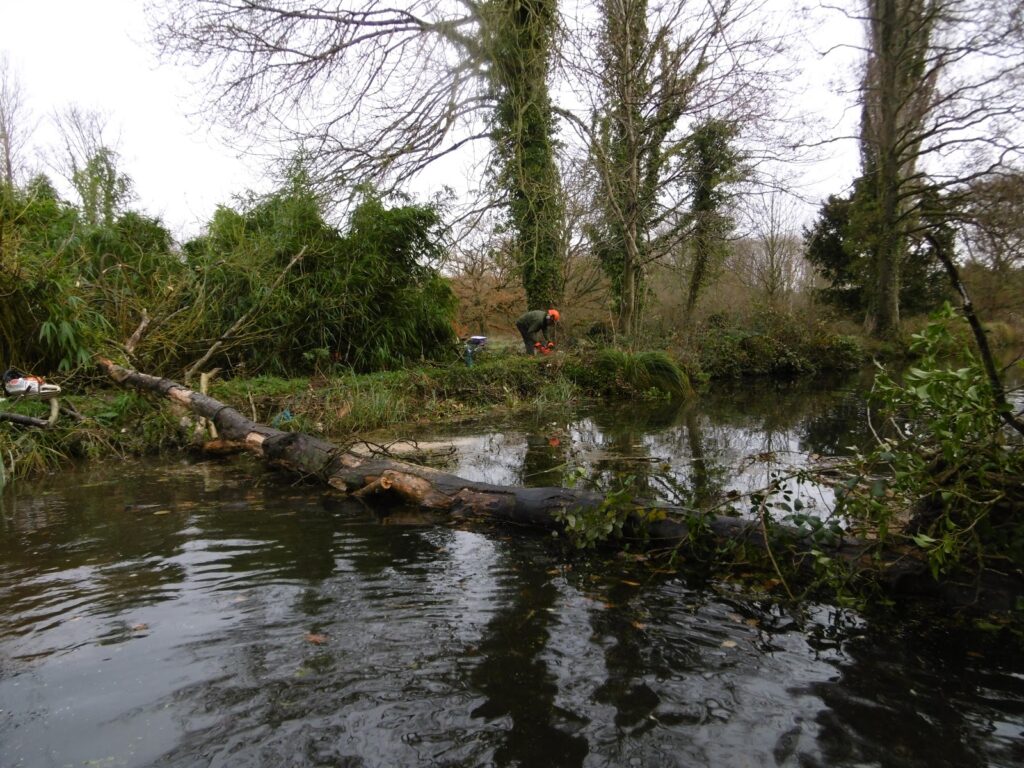 Chainsaw work continues, and the battle with the forces of crack willow was briefly parked when a sycamore cashed in its chips and fell across the mill stream during a bit of a blow one night last week. 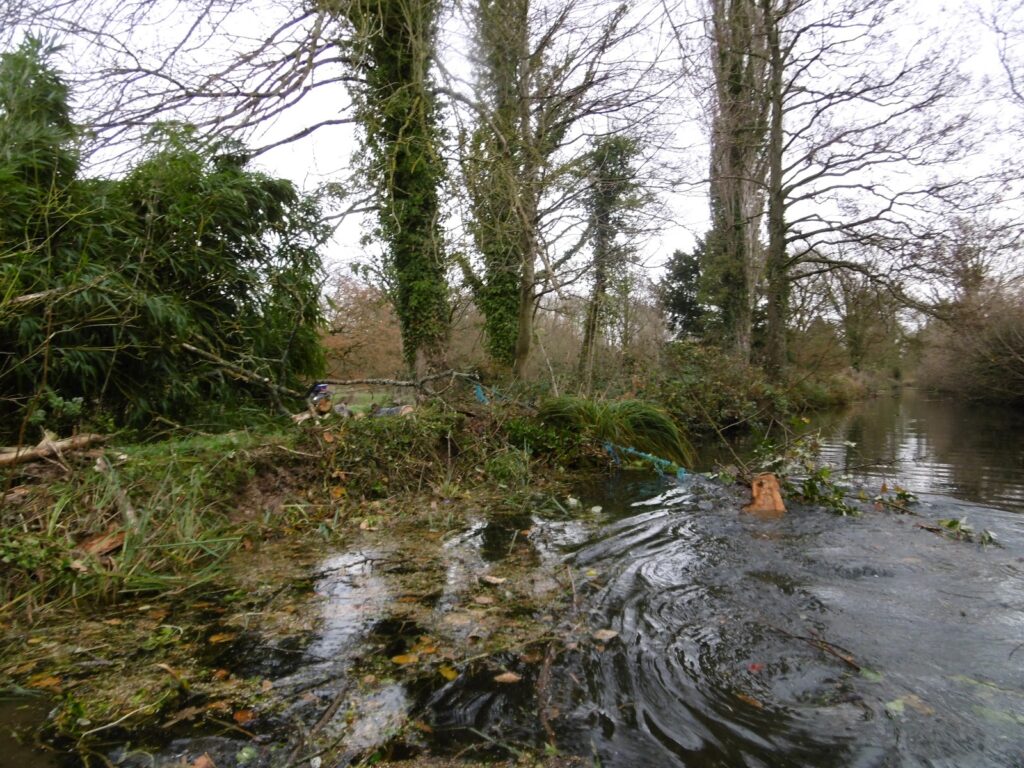 Today we have been coppicing hazel a little further up the Mill stream bank in order to let in a little more light. 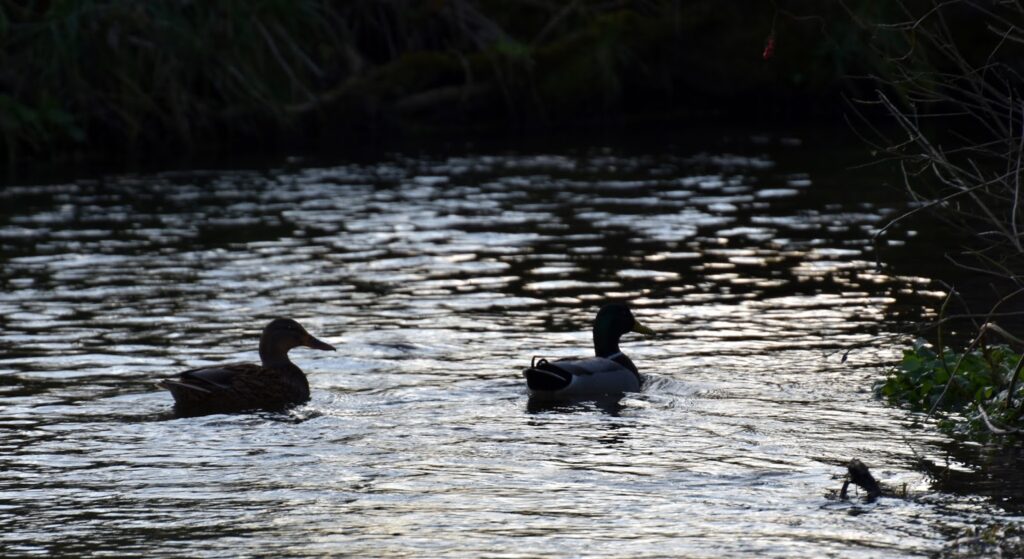 We seem to have several Waterail about the place, both on the river and pond and last week the geese turned up and even lifted off the water on our short shoot day which didn’t go well with birds flying every which way but over the guns and a fox putting in an appearance on the second drive. We’ll have another go just before Christmas and fingers crossed for a more productive day. Although there is no shortage of birds on the market. Five pheasant for ten pound were peddled by vendors various on Winchester market.
Heron are proving to be a particular nuisance at the moment and we have lost more spawning brown trout than previous years to their stabbing in low clear water. 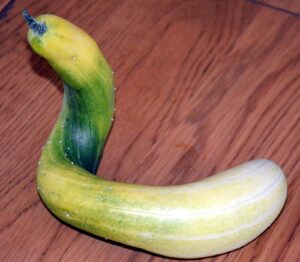 Apologies, that’s Henry Moore’s cucumber, now where did I put it,

Ah yes, here it is 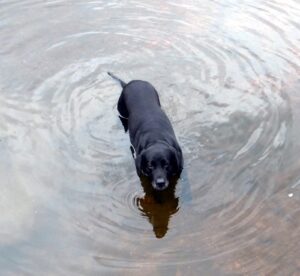 Well we’ve another bridge to build early in the new year and while the Duchess of Cambridge was a delight when she deigned to open our last bridge after Lord Ludg called in a few favours a couple of years back (see below), (yes we know it’s Kylie – the Duchess’s official stand in Chris informs us! – Ed.) 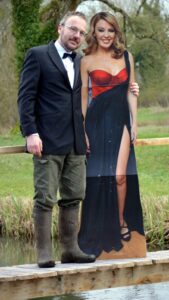 There’s a new princess in town, so thanks for the offer of a return visit Kate but I’m afraid Princess Meghan has agreed to open our next crossing.

I trust this won’t be the cause of any trouble around the family dinner table during the festive season.

Start typing to see results or hit ESC to close
salmon fly fishing chub roach pike
See all results
More Stories
Nearly a world record
This website uses cookies to improve your experience. We'll assume you're ok with this, but you can opt-out if you wish.Accept Reject Read More
Cookies Policy