Jeremy Wade is Back Fishing for More River Monsters

The seven-part series follows the biologist on a dark and dangerous journey to explore the myths of the deep and reveal that truth is often stranger than fiction. Each episode brings him into close contact with rare predators with potential to kill, from sawfish in Australia to electric eels in Brazil.

The ‘Ball Cutter’ stars in the first episode of the series (The Mutilator, 3 January) in which Wade investigates a spate of bizarre deaths in Papua New Guinea involving a creature that severs and then devours certain body parts of unsuspecting fisherman, leaving them to bleed to death.

As with many in the series, this programme highlights physical changes to the fish, often due to climate and human activity. The Pacu, once vegetarian, was introduced to New Guinea to increase fish stock, but lack of suitable vegetation in the river saw them adapt to meat eating – where their powerful teeth and jaws, originally evolved to crack open nuts, make short work of soft fleshy extremities.

An extreme fisherman for many decades, Wade often knows what fish he’s hooked by the feel of the pull on his line. However he’d never heard of a fresh water sting-ray, before he started investigating the death of a young girl in Argentina in Silent Assassin (17 Jan).

None of the locals are prepared to fish for the sting-ray, which they call the ‘River Dog’ One man who Wade meets still bears terrible scars from the wounds which took six years to heal. But after a fierce, four hour battle Wade finally landed the 20-stone monster, which measured 53 inches in diameter and sported two four-inch poisonous barbs on its tail, designed to rip flesh apart before injecting a flesh-rotting venom.

In the remote jungles of Suriname, South America, the biologist encounters a man-eating fish more dangerous than the piranha. After hunting the ‘Wolf Fish’ for more than three weeks he finally hooks one, only to have to fight it out with a caiman for his catch. (see main image- Ed.)

Filming this episode also saw the team’s soundman struck by lightning whilst Wade was fishing on a tiny island in the middle of the Corantyne River, 2 hours flight time away from any human habitation. Jungle Killer is the last thrilling instalment in the series, airing on 14 February.

Speaking about the new series Jeremy Wade said:
“I’m a pretty experienced fisherman, but this series saw me stretched to my absolute limits … fighting for four hours with a giant, fresh-water sting-ray before finally pulling it ashore was one of the hardest physical challenges of my life. And if you asked me to name the world’s most dangerous fish, piranhas would be pretty high on the list – until now. The Wolf Fish literally has them for breakfast.”

The welfare of the fish is paramount throughout the filming of River Monsters. Hooks specially designed to cause minimum damage to the fish are used and whenever possible, fish are returned to the water as quickly as possible to fight another day.

Jeremy Wade has become a household name in the United States, where he sometimes longs for the seclusion of the planet’s most remote fishing spots, following the runaway success of River Monsters, the most popular show on global TV channel Animal Planet.

The programmes will then be repeated, as full, one-hour long versions on ITV4 at 9pm every Wednesday from 4 January. The series will also be screened on Discovery UK later in the year.

Series 4 of River Monsters is currently in production. 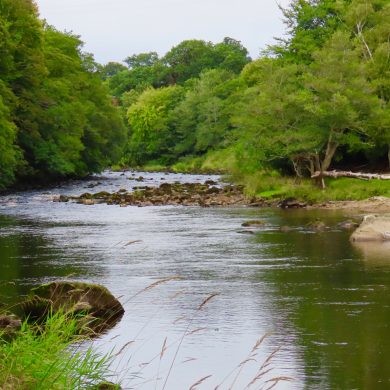