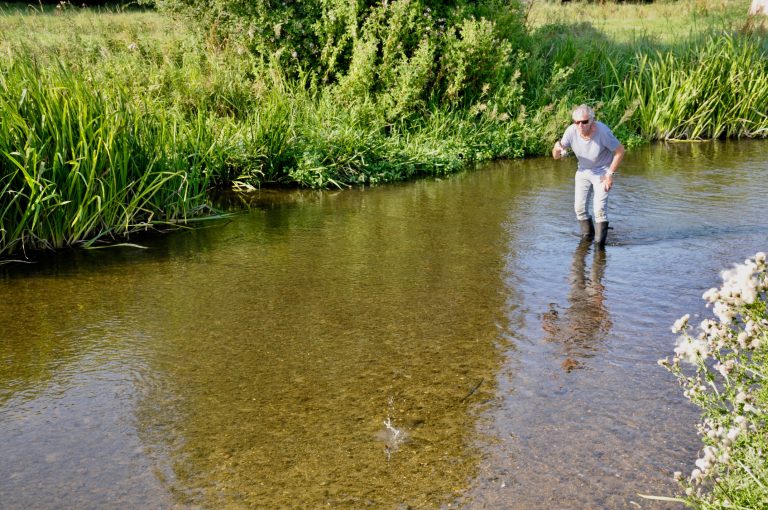 Many of us were brought up in our fishing infancy by the wise words of Mr Crabtree, aka Bernard Venables. Yes, baits and methods were covered in Crabtree, but perhaps the abiding memory was always the insistence on watercraft, the core of what fishing is all about for me, probably you. I have no doubt watercraft is massive on stillwaters, but I have been beginning to wonder about its present-day importance on rivers. My slight reservations were given a nudge by an excellent piece by Denise Ashton in the recent Wild Trout Trust magazine, entitled Trout Travellers. Much of what she said is of course trout-focused, but the piece is broader than that in my view and encompasses most river species… apart from perhaps gudgeon and bullhead! What I propose to do is not quite an article of the old school, but more a list of points and observations that might trigger responses of your own?

The traditional big trout lie. Denise queries whether the concept of a lie being occupied and held by a specific big fish for years is a true one. We can all think of examples where this has happened, but perhaps these instances are exceptions rather than rules. I always liked this concept myself and tried to apply it to not just trout but chub and barbel as well. These five years past, though, I have been forced to give up on it, and accept that all big fish use lies for a while, but nowhere near as long as they did in the 70s and 80s. My observations on endless intimate rivers, where sighting is possible, suggests that otters are the biggest factor in this change. Big fish of all species are nowhere near as relaxed as they once were, and much more likely to move lie frequently. Angling pressure has exactly the same effect, so I am not blaming otters exclusively.

NOT THE STAY-AT-HOME TYPE

Denise cites one River Deveron brown moving 84 kms over the course of a month. This was not a stay-at-home type fish, for sure, and if you had tried to target it in a specific lie you wouldn’t have had much luck. But that fish is not unusual I’m thinking. EA research on the Broadland rivers has recently proved that bream and pike, especially, rarely keep still, but can be almost on continual migration. Spawning, spring tides, salt tides and temperature changes are considerations, but fish move all the time irrespective of these. I have personal knowledge of individual chub swimming two miles in a morning, and barbel even further than that on a regular basis.

Denise wonders if trout tend to move downstream as they grow. Probably. The head waters where they are born might be too shallow in heat or too poor in food for bigger fish to tarry there. But I feel much the same might happen on many rivers with many species. Take the Wensum. The upper river has long held small chub, and a very few big ones, but has never been prolific. It is very much my suspicion that as chub reach a pound or so, they wander down-river. Looking back, I am semi-sure that roach behaved the same.

Denise wonders how weirs and mill sluices impede fish movements, and soon we might have to add beavers’ dams to the study. Karen Twine, that excellent fish biologist, told me that her work on the Ouse showed conclusively that tagged barbel routinely climbed and descended weirs with little effort. My own Wensum experiences from 1980 ’till the present day mirror this exactly. I have caught/seen barbel two or three weirs up/down from their original sighting/catching place. Chub are the same and in my experience use the whole river, and not just the section they find themselves in.

Denise does think that weirs and sluices might slow migrating fish down, and make them vulnerable as a result. She uses the example of 80% of tagged Tweed sea trout smolts that disappeared above one weir alone. She suggests fish-eating birds were the culprits. I have no doubt that roach suffer the exact fate. Repeatedly this century I have located large numbers of Wensum roach happily in situ above mills for some weeks… until cormorants find them. Sometimes the annihilation is complete. In winter 2005/06 there were in excess of 25,000 smallish roach above Lenwade Mill on the middle Wensum. I lead a couple of groups to India in January and February and on my return, every roach had gone. I was told 40/50 cormorants had been in residence for nine weeks and had hoovered the lot. Some might have escaped through the mill sluices but it must have been a case of devil and the deep blue sea. It does not, however, have to be a barrier to create the conditions for this carnage. Many times I have been aware of roach concentrations that gather and swell in numbers, and then are located and completely wiped out by flocks of cormorants that target the area for as long as it takes.

This winter much of England has seen serious, prolonged flooding. My fear is that very many fish have been displaced by this, possibly fatally. On my local rivers, prior to Christmas, there were several “hot” roach areas where big bags could be taken by my friends. Over the more settled conditions of the last two weeks, these friends have returned and without exception the roach have vanished completely. There is nothing new in this. Back in the Eighties, a large percentage of Wensum roach were flushed, winter after winter, down-river into the centre of Norwich where phenomenal bags were taken. Deep dredging and bad sluice control were almost certainly to blame for this and  both factors are still at play today. Long areas of Wensum still show the scars of dredging forty years back, and some sluices are privately and badly controlled, basically thrown open and the river allowed to surge through. I doubt the electronically-operated EA sluices are any better, however. Think too of the huge numbers of bream caught by trawlers in the ‘70s and ‘80s in the Wash, of all places. These fish had been washed down the Relief Channel, and out to sea, by failure to control flow patterns once again.

MANY REASONS TO WANDER

I would totally agree with Denise that left to themselves most river species will move up and down river, sometimes frequently, and that they have been doing this since time began. However, this century many factors have come into play that have hugely increased this tendency. Abstraction has made smaller, upper rivers and tributaries uncomfortably low and overly hot during warmer summers. This means fish, large and small, are far more likely to wander down-river for as long as it takes to find better habitat. The huge increase in otter numbers has put all big fish on constant red alert, and made them much more likely to desert established lies far more frequently than before the otters’ return. It is no good repeating the old mantra that our rivers have always held otters. Back when they did, there were far more fish in existence, and the pressure on large individual specimens was less intense.

Cormorants – and goosanders – are a relatively new and desperate problem. They target conglomerations of all smaller fish, whether salmon smolts or roach, and either devour them or scatter them to oblivion. The effect on all stocks is devastating. Tweed salmon. Frome grayling. Stour roach. This is a nationwide problem. Warmer, immeasurably wetter winters are here to stay. The floods we have witnessed this year are colossally damaging, and push fish even to the sea itself – think of those Relief Channel bream. Dredged rivers, badly operated sluices, and bad floodplain management make the carnage worse.

‘GONE FISHING’ GOOD FOR ME

This piece started out in my head as an interesting and comparatively light look at fish migration. However, the more I considered it, and the more examples I mulled over, the darker my notes became. Things are bad in the East of England, but I have to say that working for Mortimer and Whitehouse: Gone Fishing these past four years has been good for me. Both researching and filming, I have travelled the length and breadth of the UK, and there are not many river systems that are not experiencing the problems I have outlined. The big questions are what we do about all this, and what use do Bernard Venables’ lovely river swim diagrams serve today? 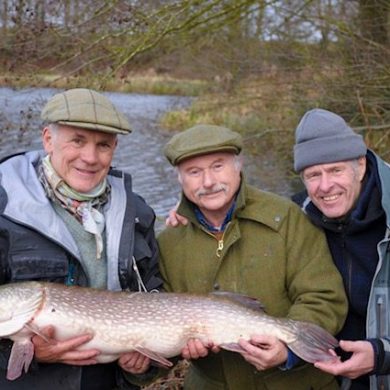