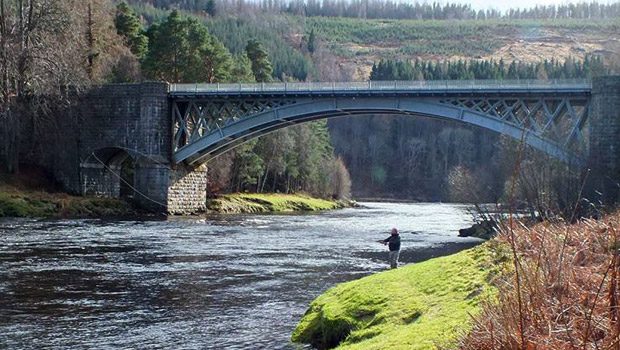 A north fishery board is hoping the reclassification of a major dam will improve stocks in one of Scotland’s most important salmon fishing rivers.

Spey Dam, which is owned and operated by Rio Tinto Alcan, diverts water from the Spey catchment to Lochs Crunachden and Kinloch Laggan, and eventually to the company’s aluminium smelter at Fort William in Lochaber.

It was completed just after World War II and, since then, it has severely curtailed access by salmon to the extensive spawning in the upper Spey tributary.

Angling on the River Spey generates more than £12million a year for the local economy and sustains 367 full-time equivalent jobs.

And it is hoped the reclassification of the dam by the Scottish Environment Protection Agency (SEPA) as a “barrier to fish passage” will lead to a major boost to juvenile salmon numbers in the upper Spey for the first time in 70 years.

Spey Fishery Board (SFB) welcomed the move and pointed out that this designation placed an obligation on the agency to find a solution to the long-standing problems caused by the obstacle to salmon migration.

SFB director Roger Knight said the board had been concerned about the negative impact of Spey Dam for many years.

“These concerns have been amplified by the step-change in juvenile populations as a result of the dam.

Mr Knight added that juvenile salmon had also passed through the screens at the off-take, from where water is diverted west to Fort William, with some dying as a result of being pinned against the mesh.

He said the reclassification would mean that, by 2027, significant improvements must be carried out to ensure the dam and surrounding habitat comply with European legislation.

“We recognise how important the conservation and free passage of salmon is throughout the Spey catchment and particularly for the communities above Grantown, where angling is mainly organised by clubs and associations.

The quality of the fishings in the upper Spey relies significantly on salmon being able to migrate successfully to the spawning areas above.”

Start typing to see results or hit ESC to close
salmon fly fishing grayling conservation Chris de Cani
See all results
More Stories
A Passion for Tarpon raises $18k for Bonefish & Tarpon Trust
This website uses cookies to improve your experience. We'll assume you're ok with this, but you can opt-out if you wish.Accept Reject Read More
Cookies Policy