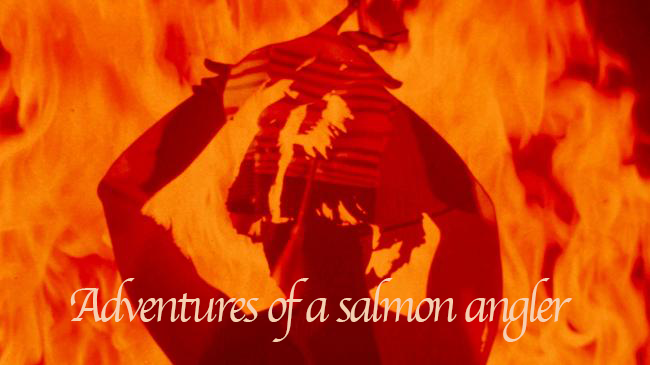 Tales of the Unexpected

I have never forgotten the first time as a barrister I addressed a jury on behalf of a client. It was a rather stuttering inelegant performance and despite my efforts justice was done and he was convicted. Whilst I can honestly say that over the years I did improve and, along the way, there were a number of minor triumphs  I have to be realistic and accept that although it was busy and enjoyable I was, I suppose, the typical “Rumpolian” criminal hack.

My success in the art of salmon fishing has also been somewhat mediocre and yet it all started so well. Of course it is widely but mistakenly believed that lawyers tell lies for a living but I assure you that what is recounted below is true or near enough so as not to matter.

Your first salmon (like other events that had better remain confidential) is an occasion unlikely to be forgotten. Mine was no exception as it occurred on my very first salmon fishing trip to Scotland as one of 4 rods and I was the only one to catch a fish during the week.  “Catch” is, perhaps, a slightly misleading term and “collide with” might be a more accurate description. It was the River Tummel in June. The weather was hot and sunny and the river low yet surprising full of fish splashing around in an irritated fashion and anxious to be off through the fish pass and into Loch Faskally.

I was in a boat on a large slow moving pool adjacent to the A9. I had literally thrown everything at them (it being long before my purist fly only conversion) but they were not interested. I gently dozed in the stern whilst my companion Ken handled the oars. There was a loud splash and after a blow to the middle of my back something dropped onto the seat beside me- a slightly stale salmon of about 9 pounds 4 ½ ounces. It then fell onto the floor of the boat and wriggled up and down. The boat very nearly capsized as Ken, on hands and knees, chased up and down after it. Obviously the right thing to do was to return it to the river. Unfortunately as we were endeavouring to do just that its head came sharply into contact with one of the row locks. To the best of our knowledge nobody had witnessed any part of the incident. However, shortly thereafter, a couple of young attractive female American tourists stopped in the layby overlooking the pool and enquired as to whether we had had any success. Whilst neither of was in the first flush of youth and really ought to have known better, Ken in particular was flattered by their attention and in order to provide them with a photo opportunity stood proudly in the bows of the boat with the salmon draped round his neck.

On returning to the hotel that evening we had something of a quandary. We could hardly admit the truth of how we came by the salmon so we agreed that we would merely say that we had caught it and asked for it to be placed in the freezer. After a quick visit upstairs to wash and change we entered the bar to celebrate our success. The only other occupants at the time were a couple of locals. On hearing that we were “up for the fishing” they immediately enquired whether we had heard about the fish that had jumped into the boat that afternoon? I may be wrong but the way in which they looked me straight in the eye when they made this enquiry suggested to me that they already knew the answer. It seemed prudent to place two large glasses of malt whiskey in front of them!

It was not until the following year, this time on the mighty Tay itself, that I did manage to catch my first salmon. I would like to be able to say that it was a bar of sea liced silver taken on a small fly on a floating line but the reality is that it was a small coloured cock fish with a pronounced kype caught on a Toby spoon. At least I wasn’t Harling!

Since then there have been many embarrassing incidents. Quite a few of these occurred on the Cumberland Eden where, for many years, I had a “day a week” syndicate rod on some of the better beats. Before I was able to graduate to one of those I did have a rod on a very attractive stretch of the river just above the weir at Armathwaite. The rods were meant primarily for inexperienced salmon fisherman like myself and the catch record on the beat was low in part because of our incompetence, but also because however attractive the water may have been it did not seem to hold salmon for any length of time and they quickly passed through upstream. The previous tenants had enjoyed slightly better success and one angler in particular (a doctor) had caught quite a number although as the record book revealed in the main these had been taken on the shrimp. This was, at that time, a legal bait but it was considered somewhat “ungentlemanly” to use it. In fact many people surreptitiously tried it in desperation but if they were successful often claimed it was by some other method.

One afternoon I came across a stranger fishing in a rather curious place where I was sure there was no prospect of him catching anything. He was older than me but I assumed him to be even more inexperienced and naive than myself and decided to play the role of mentor. He explained to me that he was fishing as a guest of one of the other members and I tactfully suggested to him that he might have better success trying some of the more recognised lies. “I’m sure you’re right” he remarked “but I think I will stay in this spot if that’s all right with you”. Having done my best I left him to it. When I enquired of my fellow member who his guest had been I was somewhat mortified to be told that he was in fact the doctor who was responsible for at least 90% of the salmon that appeared in the catch record

Mercifully a few weeks later, it was not the doctor who came across me but a more experienced member of the syndicate,  as, in high water, I tried to play a strong fish that I had had on for about 20 minutes without seeing. I would have been unable to land it on my own but he did the necessary and having done so informed me that I was now the proud captor of a “Goodyear” cross-ply tyre and did I wish to keep or return it?

Having ultimately progressed to somewhat more productive beats, I found myself on opening day of the season (January 15th) fishing Hall stream on the Crosby beat of the Eden. I had just entered my “purist phase” of fishing fly only for salmon regardless of the time of year or condition of the river. Thrashing around with a 2 ½ inch brass tube on a sinking line I was both surprised and gratified to find myself attached to a strong fish which was difficult to control as every time I tried to put pressure on it seemed able to run upstream at will. What I should have concentrated on was playing the fish, but the fact that I was into what seemed to be a springer on opening day and on-the-fly caused my mind to wander and taking for granted that it would be landed I began to think of the kudos of so doing. I will be the envy of all the other syndicate members and doubtless would be able to have my achievement reported in all the game fishing periodicals. I was abruptly brought back to the reality of the situation when the fish, rather than running upstream decided to make a swift unstoppable run downstream right through Hall Stream and into the top end of Crosby Pool. I was down to my backing and certain that without drastic action the end was nigh. The river was high, Hall stream was fairly fast flowing but showing commendable courage, or stupidity, I entered the water and risking life and limb I followed it down with the level overlapping my chest waders and giving me a thorough soaking. Having survived the experience and entered quieter water I could not understand why the fish was now stationary apart from an occasional wriggle when I applied strong pressure. Reeling in I waded down to it to find that my large Springer was in fact a small exhausted Kelt with my Willie Gunn attached firmly to its tail. An experienced rod later told me (I am not sure whether in jest or seriously) that the fish had probably been irritated by the fly and slapped at it with his tail thus becoming hooked.

I have always tried to be helpful to inexperienced rods. My friend David had good reason to remember his first salmon. He played it under my “expert” guidance but having hand tailed it for him, returning to the bank, I managed to drop it back into the river whereupon the cast broke and it was never to be seen again. I do not think that he really believed my suggestion that it was traditional many years ago to return ones first fish and that I had just done so slightly prematurely. He always landed his own thereafter.

You can read our book review and how to buy yourself a copy HERE. 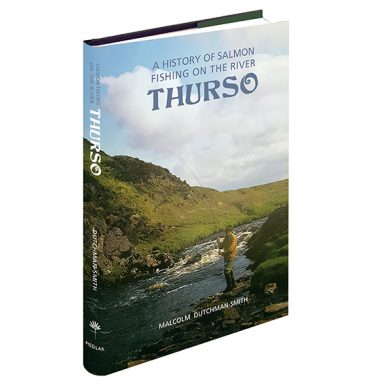 A History of Salmon Fishing on the River Thurso
This website uses cookies to improve your experience. We'll assume you're ok with this, but you can opt-out if you wish.Accept Reject Read More
Cookies Policy