This week saw me successfully complete forty nine years on this earth and the twenty fifth anniversary of my employment in my current position. It’s my thirty first year working in the valley, three of them part time while studying at Sparsholt. I’ve a few contemporaries who have clocked up a couple more years as these kind of postings are thin on the ground and the sort you hang onto.

And at this point the piece could descend into a grim tale of lost water a meddling bureaucracy and a chronic decline, but I feel the occasion requires us to look up and not down. So here we are, thankful to have made it this far. 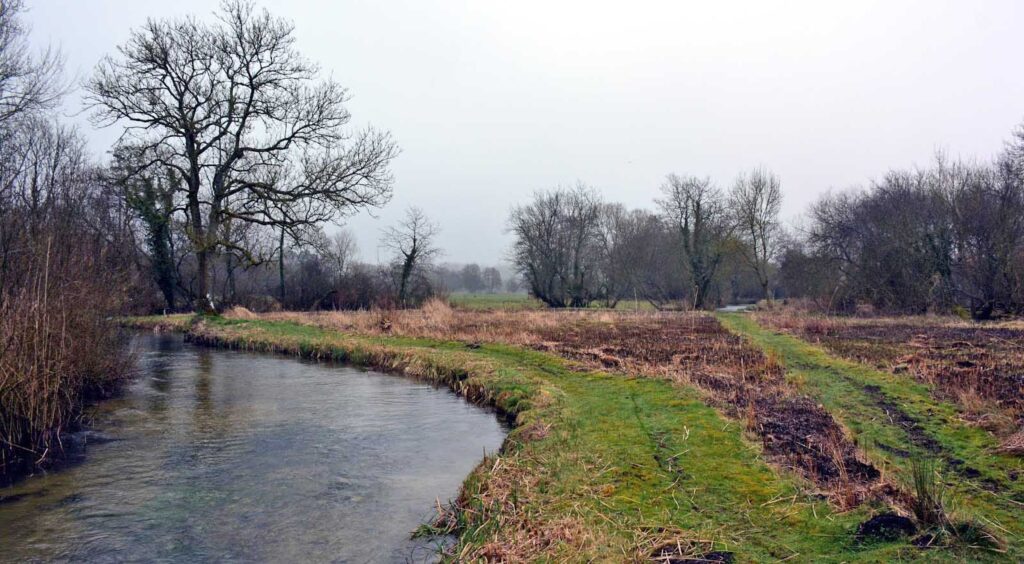 I was put forward for my current position by Brian Parker, head keeper at Bossington Estate, after a brief spell managing a hell hole of a fish farm not far from junction 18 of the M25. The highlight of our tenbure was popping up to the smoke to take in Pavarotti in the Park one evening after work (everything else was dreadful, they even diddled us out of £500 on our departure) and gladly accepted the offer of this employment.

The lady who sleeps to my left and I arrived here on a dark Friday night with a car piled high with all we owned, two dogs and a cat. The wood burner was already lit, the key was in the door and the lights were on, Lord Ludgershall was frantically completing some painting in the small hall and for the only time that I can remember in the following twenty five years ,he eschewed my offer of a drink stating that “he would have a glass of Madam’s whisky over the road” 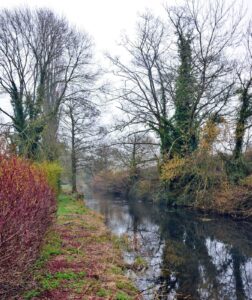 The next morning the cat disappeared which caused tears, as she was much loved and the first pet that we had. She reappeared a few hours later on the roof. Born and raised in a nearby parish she was as pleased as we were to be back in the old postal region. That pleasure remains and this place will always mean a lot to us. Married a few months after our arrival we have both gained and lost loved ones during our tenure, emotional tattoos that will forever be associated with our time living and working by this river.

The internet and mobile phones were lines on a drawing board and the GPO retained a reasonable reputation before they became the spawn of the Devil under their new moniker – BT. Rosemary Conley was all over the Hip and Thigh and we marvelled at the electronic miracle that was our Game Boy. On the river the regular rods only fished from Monday to Thursday with a full rod costing £600. The Mill stream remained fishable until well into high summer , Klinkhammers and Parachute Adams had not yet made it across the pond and a Daddy Long Legs was considered “not quite the thing” The river regularly ran blue in the Autumn as a treatment for trout with white noses and not many people wore safety gear when working with dangerous machinery.

Thank you to my employer and her family for the work, home, encouragement, guidance and friendship. It is very much appreciated and the last twenty five years have been a blast.

There, through with the nostalgia and emotional stuff, and I hope I didn’t overdo it. We shall now attend to other matters,

Oh Yes, the firm have stumped up for a fantastic trip to Italy in the spring, so thank you very much for that, and here’s to the next twenty five years kindly gifted to us by ten thousand plus steps a day, the sustained consumption of red wine, dark chocolate, biffidus digestivum, and the full gamut of seeds and pulses that have caused us to leave the bedroom window open at night of late. 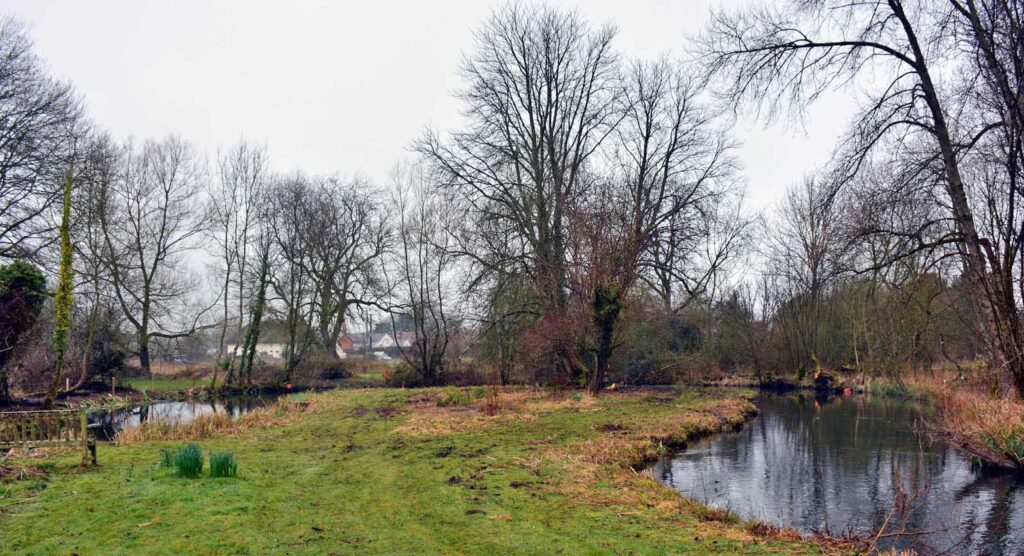 At the end of three months wielding my big orange saw, I may have lost many pounds and rediscovered muscles unused by summer work, there’s a few bits of me starting to make a few funny noises and that’s not another reference to our increased consumption of pulses and seeds, the willows are briefly in retreat, but will invariably consolidate their position and battle will be resumed in the Autumn.

In skirmishes on the bottom bends, Lord Lugg and I were delighted to be reinforced by the English, a newly retired cove with a penchant for a chainsaw (and clever coffee machines!) Ludgershall is convinced that the English covet the Ludgershall stash of logs held in the wood, and I was occasionally forced to don the boots of boutros boutros gali and the anorak of ACAS to mediate when they were at either end of a length of ash that each claimed as their own.

Thanks to you both for all of your help and, as ever, all the fun.

The river carries a little colour, because yes we have had rain, but ditches remain dry and shining a torch down a borehole used for watering the square at the cricket ground betrays a groundwater resource that is pitifully diminished.

After a two winter absence the Bittern is back and has been flushed from both the Flight pond and Mill Stream. Not heard any booming yet but there is time yet.

I recently tipped several millilitres of vin rouge into my laptop. It didn’t go well and a new keypad was required., The manufacturer quoted many pounds to resolve the issue, but fortunately I have recently made acquaintance with Ho! in China who was keen to provide me with 40 green plastic chairs. Ho! is a man of many means and has managed to source a replacement keypad for the price of a pint of high end lager in our local pub. Ho!’s friend Wot Ho! has produced a short film on a U shaped tube with instructions as to how install the thing and here we are once more, merrily banging away at the pills. The behind the scenes stuff seem to work perfectly, but front of house leaves a little to be desired as the signage rubbed off after a short period of taps and must now be re-applied each evening with one of Madam’s craft pens, which adds a folksy feel to the keyboard experience.

Returning to the river we find some very dark grayling undertaking the opening moves of pre spawning foreplay. There seem to be a few big fish about a fact borne out by the number of slightly bigger fish caught this year. Dever grayling are not deep chunky specimens but they do have a certain elegance about their lines with few fish over two pounds. The Brown Trout are active and occasionally rise to the odd Olive in the afternoon. 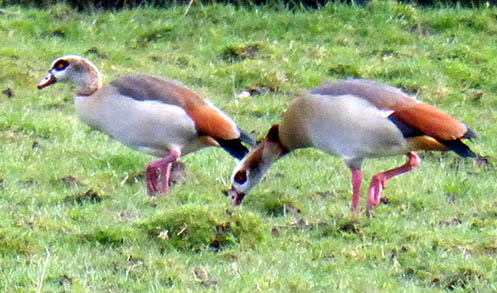 Oh yes, the geese. These were a new one for me, three Egyptian geese (only two agreed to be photographed so don’t spend too much time looking for the third)

I had to look them up (give them a google) but apparently numbers visiting these shores are on the up.

I’m coming to the end of my work within the river, it’s been a slow old business what with the low water but it is always worth doing on small streams and adds extra glist to the spring sparkle that these rivers should assume in a few months. The Fishing hut has been treated with the clever cuprinol that has so far preserved this soft wood structure on stilts for twenty two years and preparations are being made to buff up a few bridges and seats. The rods have received their invitations to fish this coming season and will arrive for lunch and a walk up the river in a couple of weeks which is always a happy day when I will inevitably be accused of removing too many trees by some rods who will then ask me in June why I didn’t take more off a particular branch as they keep catching their fly on it. It feels like the whole valley is on the cusp of waking up and a week of mild weather will serve as the flicking of a switch that will set in motion the remarkable transformation that is a North European spring.

Well done the EA for hauling Thames Water across the coals for sending untreated sewage into the Thames. With quite a fish kill and jonnies, tampons and bog roll passing through the swim it was a difficult one for them to wriggle out of, although with the concerns of shareholders and dividends paramount you can bet they gave of their best with regard to wriggling.

The opening line of this piece seemed a suitable place to bury bad news, details of the worsening situation now follow:

I don’t know, as we have only just had the millenium and our fortieth birthday party was only a few weeks ago.

But these things happen.

The house tradition (as I’m not big on cake) has it that we refer to numerologists with regard to the significance of the number of years so its over to our friends at www.ridingthebeast.com who teach us that:

If you enjoyed this blog by Chris de Cani that we reproduce here with his kind permission, then please do consider subscribing via his website at http://testvalleyriverkeeper.blogspot.co.uk, or just catch up on some of his earlier blogs you have missed. They are always a fascinating insight into this part of the world and the life of the river and river keeper alike as well as just being a great read.

Start typing to see results or hit ESC to close
salmon fly fishing chub roach pike
See all results
More Stories
Summer Salmon Spectacular
This website uses cookies to improve your experience. We'll assume you're ok with this, but you can opt-out if you wish.Accept Reject Read More
Cookies Policy