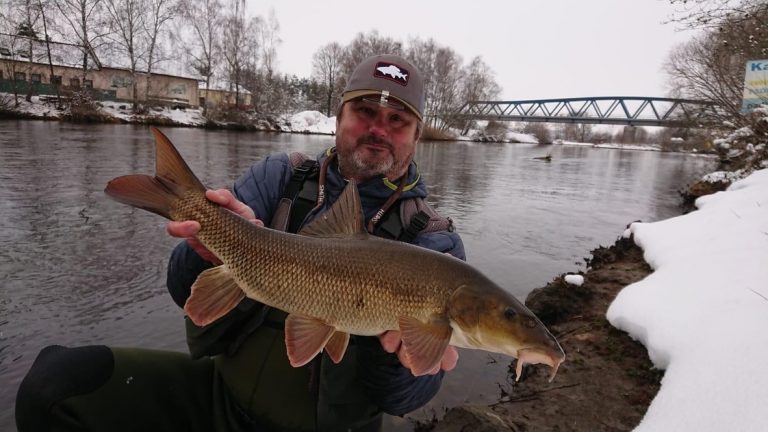 What’s Been Bugging Me About Barbel

For a long time I have been brooding about a barbel technique I flirted with around 1998/1999. In short, to set the scene, I had taken a group of anglers to the Czech Republic in 1998 to fish for barbel, eventually settling on the river Ohre. We were guided by the truly awesome Franta Hanak, a man awesome for his size, generosity and all-round niceness, as much as for his fishing. On the trip Franta taught all of us how to use the Czech nymph technique, which we all take for granted now, but which was new then, and I had been thinking hard about taking it up again when I move West to the Wye. Then, out of the blue, Tim Pryke, who had been on the trip, contacted me with a recent photo of Franta with a barbel and a snowy Czech river in the background. It is always a joy to hear from Tim, one of the true good guys in fishing: doubly so when he scratches a long-term itch like this one.

I don’t know where you stand on fancy-pants techniques for coarse fish. I’m well aware there are those who regard, say, float fishing for barbel with centre pins as arty-farty nonsense when there are feeders and 3lb test curve rods available. Tench are the best example. A lot of the people who come with me only want to use a float, and will have nothing to do with a feeder and long range stuff. Sometimes that holds them back but, equally, sometimes conviction with the float is by far the better way to put tench on the bank. Like float maker maestro Andy Field. I have watched him take a Trent barbel swim to bits on a float whilst feeder fisherman have spent the day watching immobile tips. For me, the lesson always is to have an open mind, and to realise there is never only one way to skin a cat.

But back to the story. So there we are, Tim, me and the rest in the Czech Republic completely unable to catch a barbel, even though the things were everywhere, rolling and flashing their little hearts out. For two days we struggled with corn, meat and the like ’till Franta spent half an hour grubbing under rocks and gave us a tub of neatly shelled caddis grubs. A light switch was flicked. From the very first cast, barbel came thick and fast, and each day following began with an hour’s caddis collecting along the Ohre’s margins. That in itself would have made a good story (and I did begin to use caddis and the like to good effect on the Wye on my return) but there is more to come.

On the penultimate day, I was touch legering on a small weir pool. It was full of fish and I was getting constant plucks and nudges on the line but not a single pull to strike at. After three frustrating hours, Franta appeared with his Czech nymphing outfit and asked if he could have a run through the pool. Now I know you will have guessed the outcome of this, but it is honest to God true! In six casts, Franta had a barbel, a bream, a grayling, a trout, and lost a barbel, and moved on because there were too many coarse fish present. I don’t care if the feeder mob think this is arty-farty nonsense or not: to me this, then and now, is a lesson to take on board and learn from.

The following two summers I did a fair amount of nymph fishing on the Wye to some effect. I had around twenty-some fish on the method, and even had Brian Clarke of the Times (London not Angling!) come to write a piece on me in action. I hooked one within a cast or two but it broke free, like a good few did until I learned some valuable lessons. Those lessons were roughly these.

You can’t fish too light for a big, bold fish like the barbel, and a 7 or 8wt outfit, I realised, was more fair on the fish than a 5wt. Tippet strength has to be 6lbs minimum, and preferably 8lbs. Vitally, I stopped using dropper flies, which got hung up in a fight, and began to use a single nymph on the point. Best patterns seemed to be weighted, tied on a size 8 or 10 hook, and coloured black, dark brown or olive green. Swim choice appeared to be vital. I did far better on moderately-paced glides than anywhere else, especially if these glides were between 4 and 6 feet deep, and ran over gravel and sand. Apart from these slight modifications, the technique was exactly the one Franta used for his trout fishing, and I think most of us would accept the basics are not rocket science. Yes, Franta will outfish someone like me every day of the week, but at least moderate fly-fishers can make a stab at the method, for not a lot of money spent on kit.

So that is where I am Winter 2021, and now both Tim and Franta have bounced back into my life. Tim unearthed the picture of Franta with a hefty winter Czech barbel caught on the fly, and we are in the process of ordering some home-tied flies from him. If we get some summer fishing in this second Covid year, I will bounce baits, and I will freeline and touch leger for barbel. I will float fish too, but I will also get the 7wt fly rod out again after a twenty year rest. Believe me, it is stirring stuff, and it can outwit barbel that have seen more leads, feeders, pellets and boilies than you can shake a 3lb test curve stick at.

What I would like to know, obviously, is whether there is anyone else out there, apart from Tim and me, bugging for barbel. My guess is yes. My guess too, is that they are far further along the way than me at least. It would be good to hear from any of you who have even dabbled in this fascinating approach!

Start typing to see results or hit ESC to close
salmon fly fishing chub roach pike
See all results
More Stories
Abel Acquired By The Mayfly Group
This website uses cookies to improve your experience. We'll assume you're ok with this, but you can opt-out if you wish.Accept Reject Read More
Cookies Policy