The huge fish, caught at Boleside Beat on the River Tweed, measured 50in long with a 33in girth which Dr Campbell, biologist from the Tweed Foundation, using the prescribed formula to calculate the fish’s weight, says puts the fish at a weight of 50lb.

Shamus who is a part-owner of the beat with his brother Francis, couldn’t believe his eyes when he eventually brought the massive fish to the net – at the fourth attempt – He said:

“It’s taken me almost 40 years to catch a 25 pounder, (Caught the day before on the same beat) but this is simply incredible,”

Fishing from a boat, Shamus hooked the fish in Glenmayne Pool using a Boleside Shrimp tube fly  that head boatman Nigel Fell had created with a local fly dresser. After 35 minutes the fish was eventually brought to the boat, where it was measured, photographed and returned safely to the river.

Dr Campbell revealed that it is not uncommon for such large fish to be heading to the Ettrick, a tributary of the River Tweed and there is video evidence of fish over 48lb passing the Ettrick Fish Counter.

The fish puts Shamus in a strong position to win the most prestigious angling trophy for salmon fishing in Scotland, the Savills Malloch Trophy, awarded to the angler catching, and safely returning, the biggest rod caught salmon on the fly. 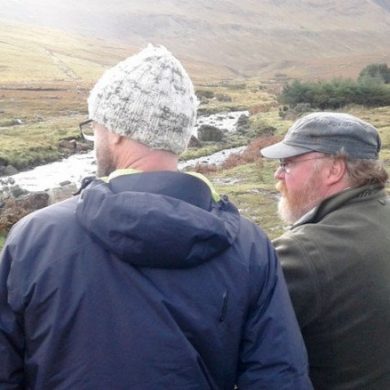 Biologist Presents Novel Approach To Boosting Wild Atlantic Salmon Numbers In Irish Rivers
This website uses cookies to improve your experience. We'll assume you're ok with this, but you can opt-out if you wish.Accept Reject Read More
Cookies Policy