RAFTS will be asked to withdraw their support for the controversial ‘Managing Interactions Aquaculture Project’ and file objections to all salmon farm applications. Protect Wild Scotland will be distributing leaflets to RAFTS members as they arrive for the AGM at Perth Racecourse (9am). Protestors wearing ghoulish masks will then visit the Scottish Salmon Producers Organisation’s head office in Perth (10am) before visiting nearby supermarkets to alert shoppers to the horrors of farmed salmon.

“RAFTS is sadly not at races when it comes to campaigning against the expansion of salmon farming,” said Don Staniford, Director of Protect Wild Scotland. “In view of the fact that wild fish on the West coast are being eaten alive by blood-sucking parasites it is apt that today’s AGM is taking place on Halloween near the head office of the disease-ridden Scottish salmon farmers. The message to RAFTS is simple: stop protecting the Norwegian-owned salmon farming industry and start protecting the wild fish economy on the West Coast of Scotland.”

RAFTS signed onto a ‘Ministerial Briefing’ in 2011 endorsing the expansion of salmon farming on the West Coast of Scotland. “The wild fish sector recognises the permanence and economic importance of the aquaculture industry to Scotland and the West Coast of Scotland in particular,” conceded RAFTS. “We recognise the desire of Government and the industry to increase Scottish production.”

“RAFTS has a duty to protect ALL rivers in Scotland, not merely the prized East coast rivers such as the Tweed, Spey and Tay,” said Jenny Scobie, Chair of Protect Wild Scotland, who filed a complaint against RAFTS with the Office of the Scottish Charity Regulator in October 2012. “It is sacrilege that the icon of Scotland, the Atlantic salmon, has been sacrificed on the altar of Norwegian-owned salmon farming. Let’s face facts – the only way to stop the expansion of salmon farming is to stop cravenly kowtowing to industry and Government. The choice is clear: do we want disease-ridden salmon farms or healthy wild fish? It’s time for RAFTS to uphold their mandate and fight to protect wild fish.”

Protect Wild Scotland say that RAFTS has experienced an ‘Annus Horribilis’ since their last AGM including an investigation by the Office of the Scottish Charity Regulator, delays to the much maligned ‘Managing Interactions Aquaculture Project’ and the resignation of their Director.

Protect Wild Scotland will also be organizing protests outside Selfridges and M&S supermarkets and the Atlantic Salmon Trust gala dinner on 20 November in London and outside Harvey Nicols, Sainsburys, M&S and the First Minister’s residence in Bute House in Edinburgh on 5 December – for event details visit online HERE 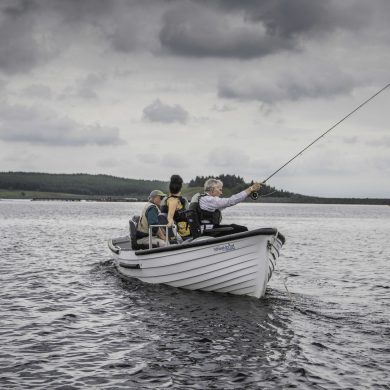 Angling Trust and The Wheelyboat Trust launch their project to provide seven clubs and fisheries across the UK with new Wheelyboats
This website uses cookies to improve your experience. We'll assume you're ok with this, but you can opt-out if you wish.Accept Reject Read More
Cookies Policy